Before Donald Trump’s 2016 election, “snowflake” as an insult for liberals hovered on the fringes of the lexicon. At Orchard City Indivisible (OCI)—a local affiliate of a national political group that coalesced as a countervailing force to Trump’s rise—the pejorative has become a badge of honor.

In a packed sanctuary at Campbell United Church of Christ Tuesday night, OCI members wore snowflakes on T-shirts and lapel pins. Mara Privitt, who ran the check-in desk at the entrance, wore a glitter-dusted snowflake crafted from cardboard and feathers into a theatrically oversized hat.

“I know about 20 or 30 people here who got snowflake tattoos,” said John Comiskey, vice chair of the Santa Clara County Democratic Party, who sported the crystalline icon on his name badge. “We’ve embraced it. Enough snowflakes make an avalanche.”

Behind him, MSNBC and CNN played on two projectors. The room burst with applause when both channels announced that the Dems were on track to win back the House, and with “boos” when the returns showed Beto O’Rourke trailing Sen. Ted Cruz in Texas.

Basil Saleh, a political newcomer in his early 20s who ran against candidates nearly twice his age for the Campbell Union High School District school board, lingered toward the back of the room before the first round of results posted. Although he lagged far behind Robert Varich and incumbents Stacey Brown and Kristiina Arrasmith with nearly half of precincts reporting at that hour, he said he felt hopeful—and that he owes a debt of gratitude for the support of OCI.

“I wouldn’t have made it this far without this group,” said Saleh, clad in a casual bright red felt button-down shirt, khakis and sneakers.

OCI has worked tirelessly in the past two years to support left-leaning local candidates like Saleh. But the chapter’s reach extends far beyond the South Bay.

By teaming up with groups such as the Sister District Project to channel the South Bay’s progressive energy, the Campbell-based OCI chapter flipping seats in other parts of the country. Though the so-called “Blue Wave” was less mighty than OCI had hoped for, it was enough to undermine the Republicans’ one-party rule in Washington and enough to validate the activism that fueled the political shift.

There was a similar mood a 20-minute drive north at San Jose’s Art Boutiki, where owner and noted comic book publisher Dan Vado served up bottles of Lagunitas IPA with small plates of garlic tots, meatballs and crab rangoons to a roomful of politically conscious folk music fans. “We did this two years ago,” Vado recounted. “In 2016, though, it started like a party and ended feeling more like a funeral.”

But he said enough artists, poets and singers implored him to lend his venue to another election-watch shindig that he relented. “Even if it doesn’t go the way they hoped, at least they have a place to perform, to express themselves,” Vado said.

Though the Dems failed to take the Senate and lost some key races in Florida and Georgia, the House victory gave Art Boutiki guests plenty to celebrate.

Over on Moorpark Avenue in San Jose, the atmosphere felt a bit rowdier at the county Dem Party’s campaign HQ, where some attendees tossed down tequila shots from mini red solo cups. The room lit up with uproarious applause each time MSNBC showed a congressional seat being won by a Democrat.

Bill James, the county Democratic Committee Chair, addressed the lively crowd with some celebratory words despite his disappointment in Dems being unable to seize control of the Senate, where the GOP gained even more control Tuesday.

“The image for me that I’ve been looking forward to in my mind is Donald Trump with some poor staffer teaching them how to say ‘Madame Speaker,’” James said, referring to impending Speaker of the House Nancy Pelosi. 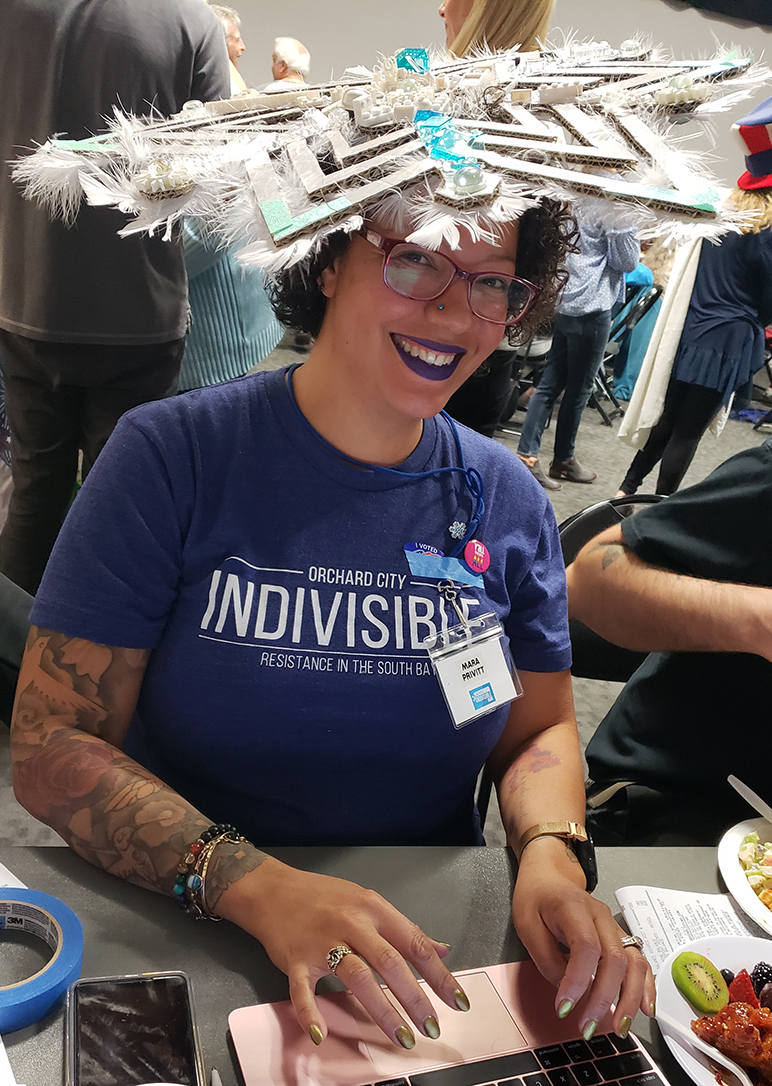 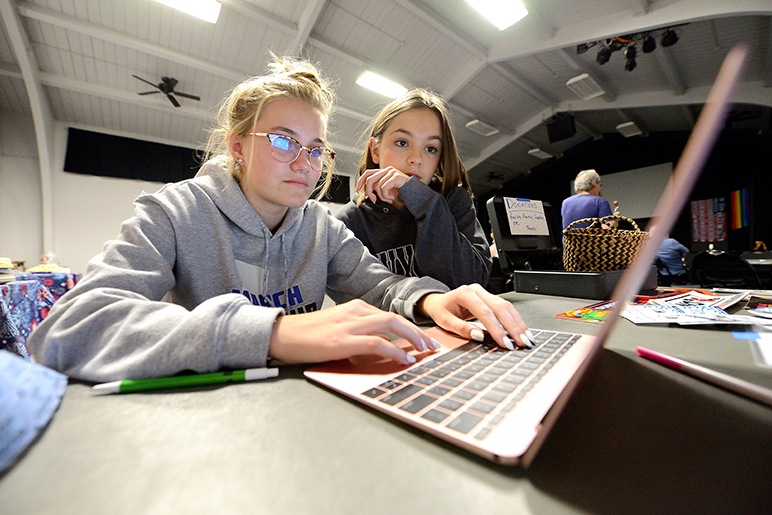 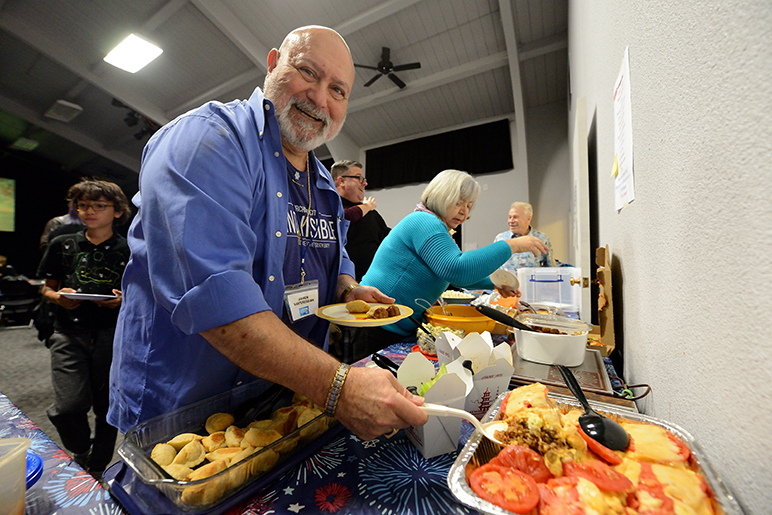 OCI members feast on a potluck while watching the results trickle in on a screen behind them. (Photo by Greg Ramar) 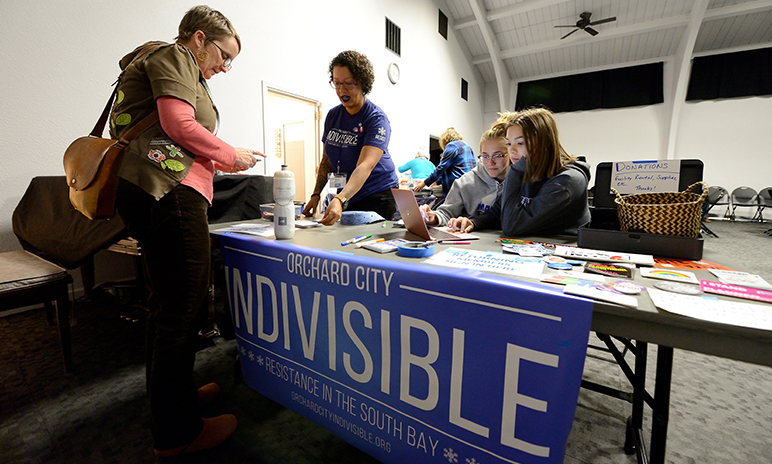 At least 200 people turned out for the OCI watch party. (Photo by Greg Ramar) 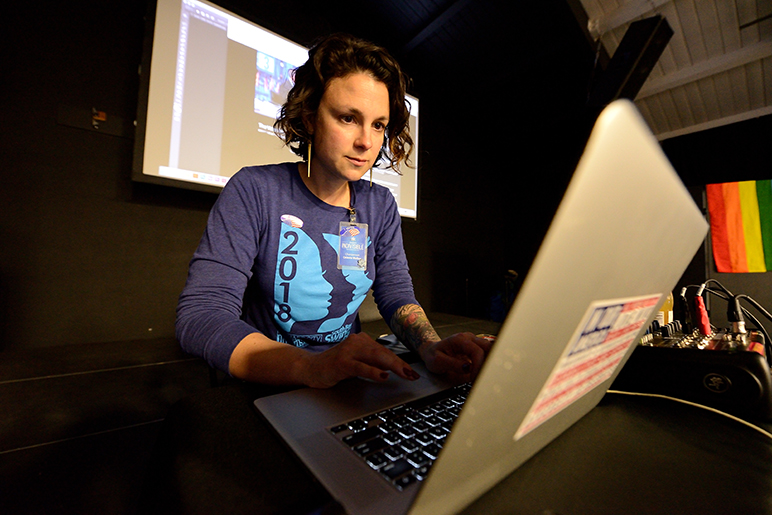 Celeste Walker, one of OCI’s lead organizers, refreshes her laptop to catch the latest ballot tally. (Photo by Greg Ramar) 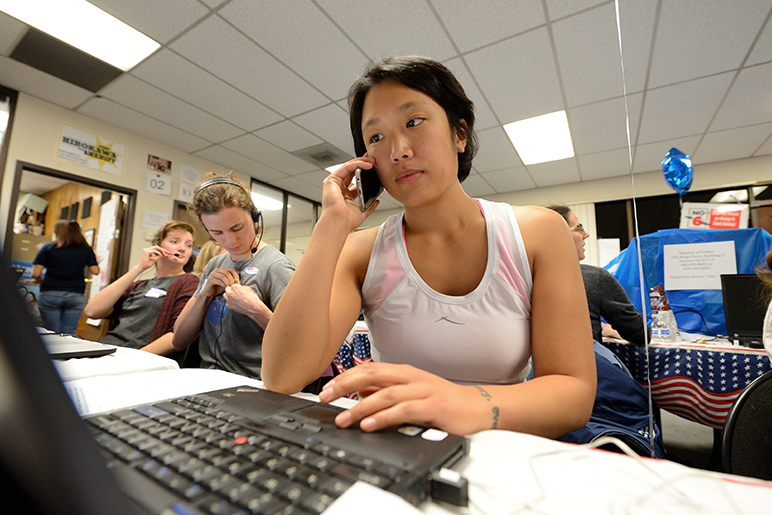 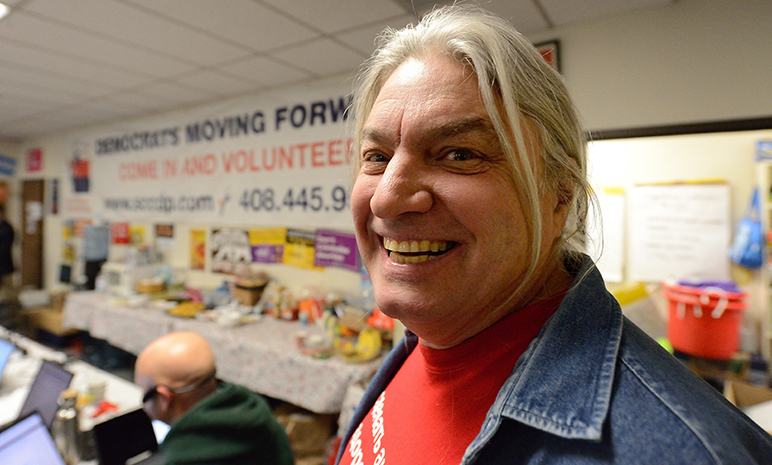 Rich Binell at the Dem headquarters in San Jose. (Photo by Greg Ramar) 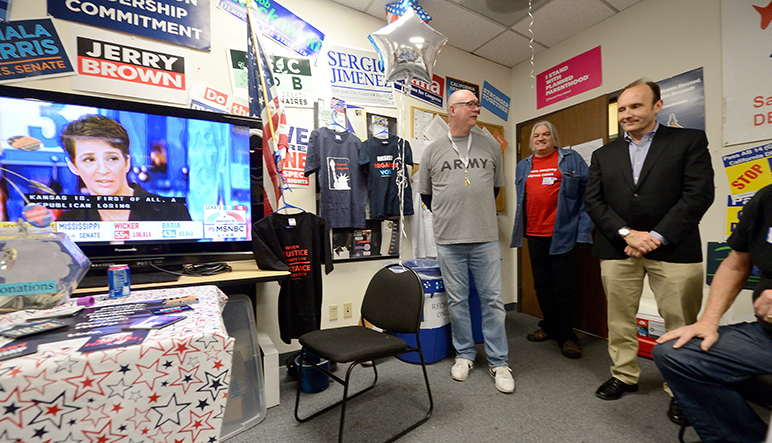 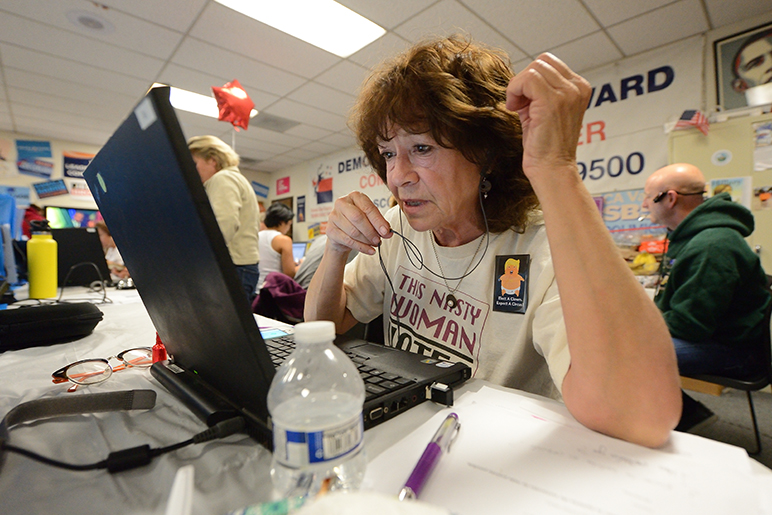 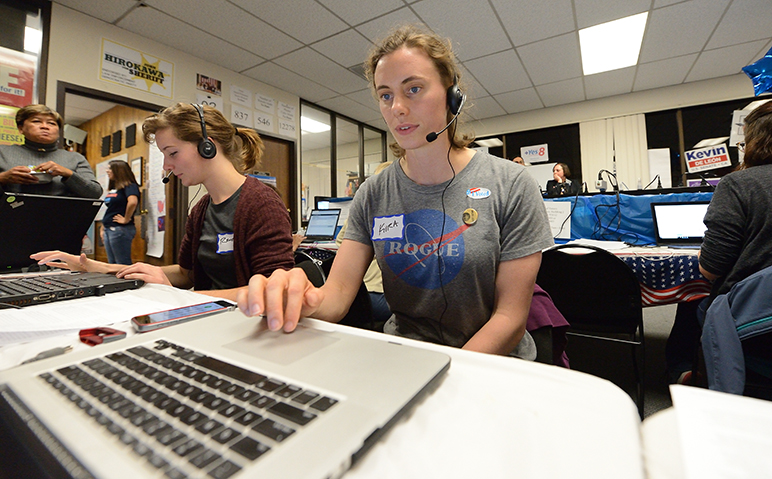 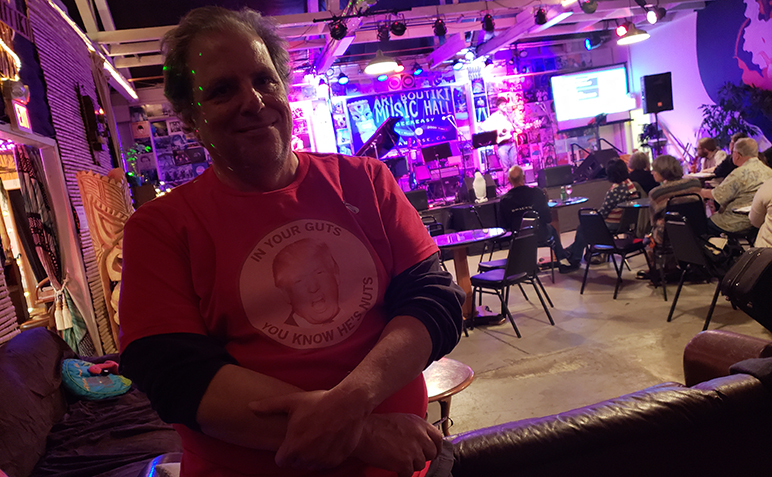 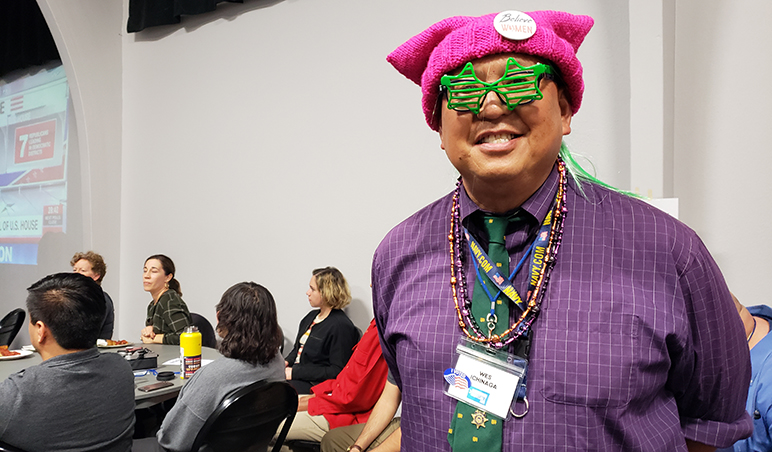 Wes Ichinga, an OCI, member was all decked out. (Photo by Jennifer Wadsworth) 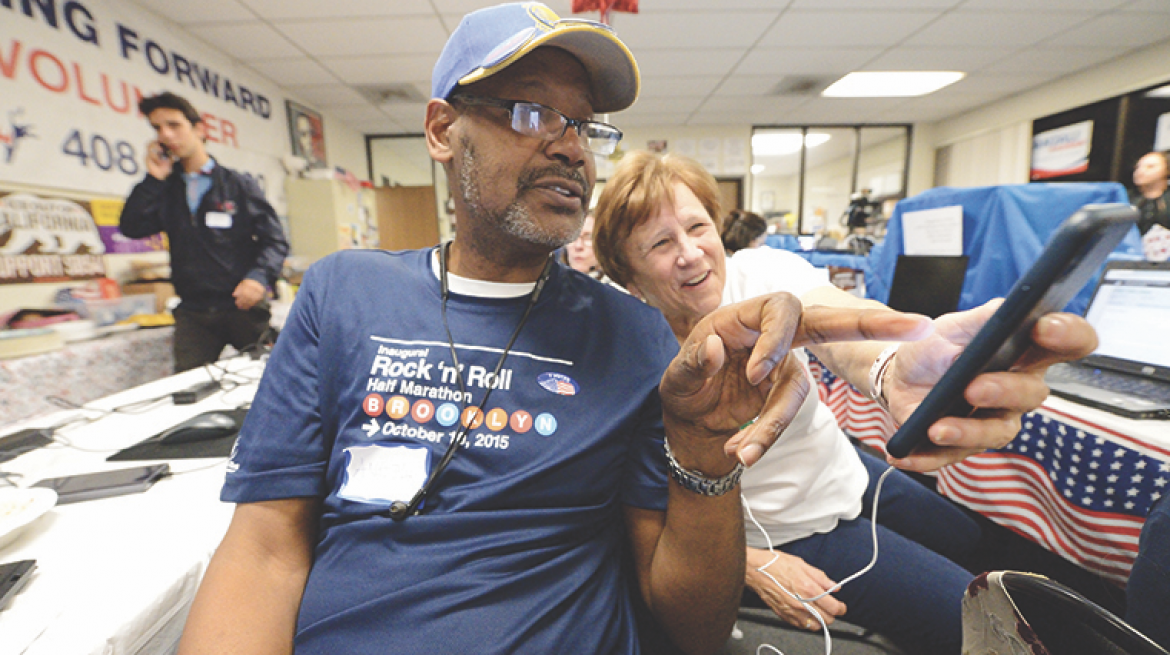