Santa Clara County Sheriff Laurie Smith is heading for a runoff for the first time since her election five terms ago in 1998. Come November, she’ll be on the ballot with her former second-in-command, retired Undersheriff John Hirokawa.

Though she fell short of the 50 percent mark that would have secured her a sixth term in the primary this past Tuesday, Smith seemed pleased at coming so an outright win, with nearly 44 percent of the vote. Hirokawa, who gave his ex-boss a run for her money leading up to the Tuesday primary, secured a little more than 31 percent. 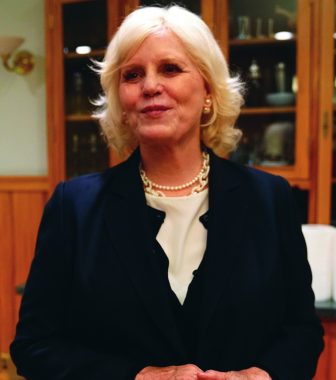 Smith celebrated her lead at the Willow Glen home of attorney Christopher Schumb, who served sushi and Korean barbecue to the campaign team and other supporters.

Author, Korean martial arts grandmaster and motivational speaker Tae Yun Kim took the occasion to gift the sheriff with a sparkling forest-green dress outfit before Smith gave a speech on the back patio thanking her friends, family and voters for helping her through a difficult campaign.

Bill James, president of the Santa Clara County Democratic Party, said he felt hopeful after seeing the first round of ballot tallies. He noted that this race has been significant in part because it was the first time local Dems endorsed a sheriff candidate.

Hirokawa, dressed in a light gray suit and red tie, expressed “pleasant surprise” by his inaugural political endeavor. But the retired undersheriff said he’ll work on his presentation in the lead-up to the general election.

“Sometimes I get bogged down by specifics,” Hirokawa explained, grasping a half-empty glass of ice tea in one hand. “But when you’re campaigning, people respond better to a broader message. They want to know why something matters.”

The runner-up, who was one of a handful of challengers in the sheriff‘s race, also said he‘d commit to being transparent and accessible to the public, and suggested that Smith would be wise to do the same. 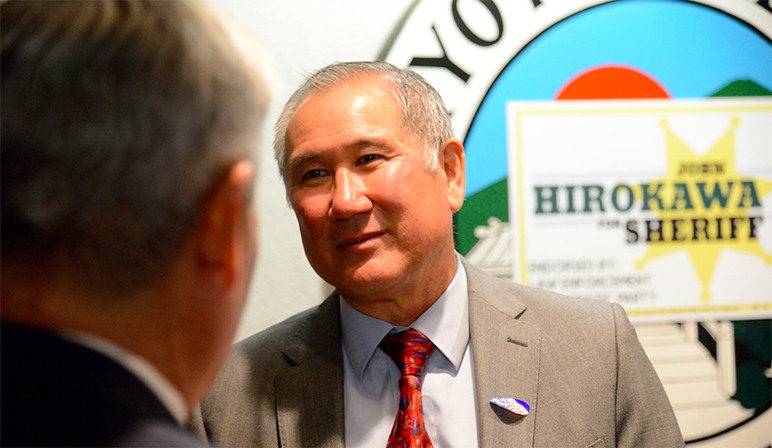 John Hirokawa chats up a supporter at Kyoto Palace. (Photo by Greg Ramar)

Smith‘s week got off to a rough start with more bad press about misconduct allegations, which she has assiduously denied. So instead of making a planned public appearance at the South Bay Labor Council just after the initial returns posted, the sheriff opted for a more private setting to spend the evening.

As the hours passed, attendees from other private parties hosted for candidates in other local races began to trickle into the Labor HQ. Fly tried to join the fun, but labor apparatchiks blocked entry, even though other reporters were milling about inside. A gatekeeper said the gathering was “media invite only,” which Fly has learned over the years means anyone but us.

Our photographer fared no better. A woman gripping a fistful of plastic forks blocked his entrance, demanding to know who he was and who he worked for. When he asked for her name, she replied, “I’m Betsy the Fork Lady.” 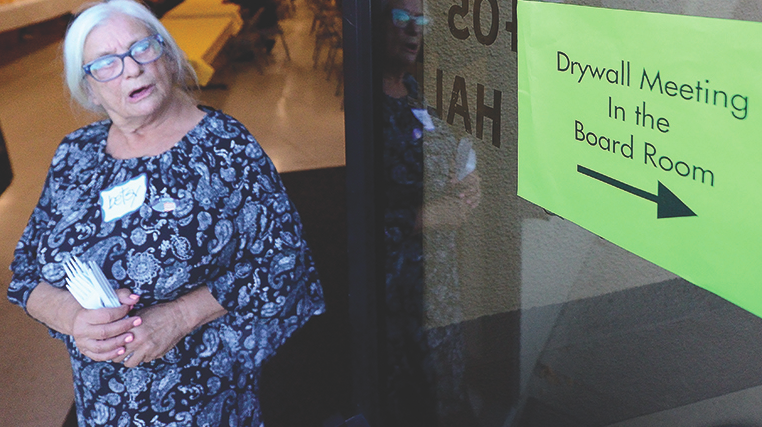 Betsy the Fork Lady upholding the longstanding tradition of ousting us from the labor temple. (Photo by Greg Ramar)