The question posed at a recent San Jose candidate forum seemed so far-fetched that the room erupted with laughter. An audience member asked the panel of five City Council candidates on Monday whether they’d support arming teachers with guns.

In a heavily blue region with some of the strongest firearm laws in the nation, that’s the response one would expect. But about a week earlier, one local education official decided to brave the blowback. 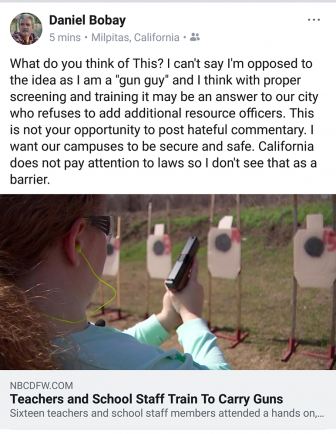 On March 11, Milpitas Unified School District Board President Daniel Bobay posted an article about the whole teacher-gun thing and asked people to weigh in.

“What do you think of this? I can’t say I’m opposed to the idea, as I am a ‘gun guy,’” he wrote, “and I think with proper screening and training it may be an answer to our city who refuses to add additional resource officers.”

Unsurprisingly, that didn’t sit well with the Pomeroy Elementary School PTA, which urged parents to call Bobay as part of “National Call Out Day,” a campaign to phone legislators in support of stronger gun regulation. PTA reps also brought it up at a board meeting last week.

Bobay tells Fly that his comments were taken out of context and that the PTA’s criticism verged on slander. Besides, he says he realizes that arming K-12 teachers would never fly in left-leaning California and that he’s leaning more toward installing metal detectors at the 13 schools in his district.

As a conservative, Bobay says he’s used to the vitriol, which he says he experienced last fall by welcoming DeVos to Thomas Russell Middle School.

“When she came to our school, I saw that she didn’t want to be with the adults, she wanted to see what the kids were doing,” he says. “I came away thinking, ‘Jeez, you know, she’s not some kind of monster.’”