California’s Fair Political Practices Commission is no stranger to Alum Rock, an embattled school district with a history of investigations and fines for finance violations, including Dolores Marquez-Frausto’s $7,000 fine in 2019 for not being able to prove the origins of some of her campaign money. 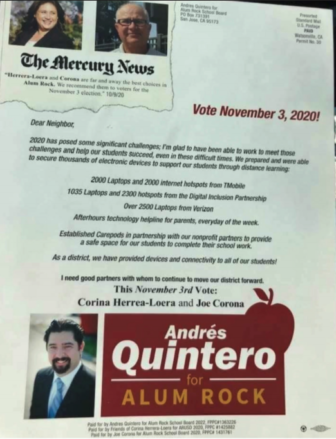 The flier in question, as included with the Dec. 11, 2020 FPPC complaint. (Courtesy of the FPPC)

Now, the campaign watchdog has opened an investigation based on an anonymous December 11 complaint accusing the trio of “laundered campaign contributions” and “contributions by intermediary or agent,” in creating and sending out a promo last year.

One problem: that doesn’t match with the county’s Registrar of Voters (ROV) records. Rather, the money appears to have flowed from Quintero’s 2018 account.

Quintero chalks that up to lost documents or a glitch at the county office, but said he didn’t have the paperwork on hand Tuesday to show he’d done everything by the book. Only a records request unearthed the file showing he'd changed the campaign's name at the state level, but not at the county, as required by the ROV.

That matters because dollars left in an old committee 90 days after election filing deadlines are often deemed “surplus funds,” which can be used for some expenses, but not promoting other candidates, according to the FPPC handbook. Quintero says he changed the committee’s name, making that rule moot in this case, but without the documents on file, that is what the agency will have to square in its newly opened investigation.