The special election to succeed former San Jose Councilman Kansen Chu—and by extension his temporarily appointed fill-in Margie Matthews—has mostly flown under the radar to begin the year. But next week the campaign takes greater shape, when candidates file their first campaign disclosure forms for 2015. Some candidates began organizing before the New Year to get a head start raising funds, and Vietnamese media honcho Manh Nguyen led the charge with a haul of $43,085 through December. Meanwhile, civil rights attorney Lan Diep tallied a respectable $21,783. Diep’s forms show more supporters from outside the city, but the pair has been fiercely jockeying for the Vietnamese community’s support. They’ll be forced to share a dual endorsement from the San Jose/Silicon Valley Chamber of Commerce. Bob Dhillon, owner of a realty company, came in third in collecting cash with $11,250, but a fourth candidate, among several other options, is expected to pose a bigger challenge when all fundraising is complete. Several candidates dropped out of the race despite filing forms to have their names on the ballot, leaving Tim Orozco, a staffer for State Senator Bob Wieckowski, to snag labor’s endorsement. His entry came in January, meaning his first disclosure filings will arrive next week. That hasn’t stopped some influential groups from ramping up outreach on his behalf, though. In addition to the South Bay Labor Council’s stamp of approval, Orozco has received the support of BAYMEC and county Supervisor Ken Yeager. In an email blast, the pair sent out a fundraiser invitation for this Sunday touting Orozco as “the first LGBT candidate for San Jose City Council since 2007!” Fly’s fact check found a couple issues with the announcement: first, the last LGBT candidate to run for council was Steve Kline, who lost to Pierluigi Oliverio in 2012 while running for Yeager’s old District 6 seat; second, the announcement’s 54-point font headline misspelled Orozco’s name. With almost two months to election day, there should be enough time to iron out the branding. 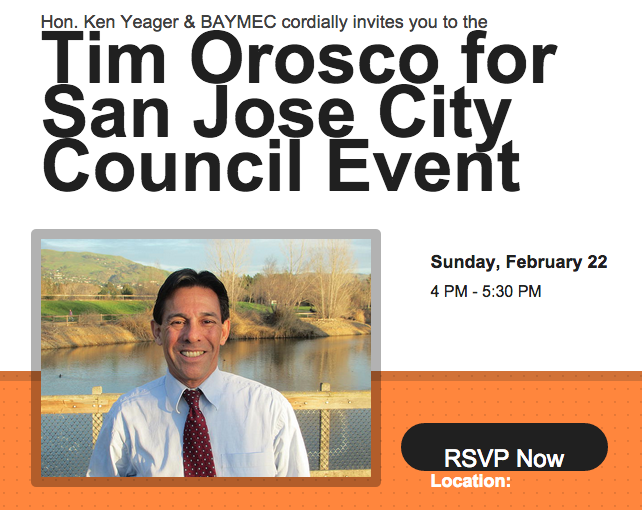