A political consultant who posted a topless photo of his former love interest on Twitter has failed to follow through on bogus libel accusations. This summer, Shaian Mohammadi sued Metro Silicon Valley (San Jose Inside’s parent newspaper) and reporter Jennifer Wadsworth for defamation, claiming a Fly column about the revenge porn incident sullied his reputation and led to him being placed on academic probation at law school. Codefendants named in the lawsuit included San Jose Councilman Don Rocha, as well as his former policy aide, Ann Grabowski, who accused Mohammadi of harassment but was not involved in the revenge porn. Rocha went on the record in Fly’s story to defend his former staffer, while Mohammadi’s ex provided Fly screenshots of vulgar language and an admission that he’d posted a topless photo of her. Mohammadi himself copped to posting the topless photo, but tried to pass it off as an accident. The 14-page complaint, filed July 3 in Santa Clara County court, claimed the revenge porn revelation was false and cost Mohammadi friends, clients and job leads. He hired an attorney—John Mlnarik, who had just lost a defamation case against Santa Clara blogger Robert Haugh—but never bothered to serve anyone with the lawsuit. Once the 90-day deadline passed this month, a judge dismissed the case with prejudice, meaning Mohammadi can’t re-file the claim. It’s possible Mohammadi remembered that Fly has transcripts of Facebook chats, cellphone texts and emails that document some of his meltdowns. Or, maybe he never planned to follow through with the case in the first place, as it’s common for people with controlling tendencies to use the courts as an extension of their harassment. It’s also possible that Mohammadi sued to stifle a free press—a troubling trend that has gained steam as inconvenient facts are increasingly labeled fake news—or to intimidate Grabowski and his former beau, a respected activist and political operative who requested anonymity. In his lawsuit, which was picked up by the Mercury News and Courthouse News Service, Mohammadi called the bad press the root of his problems. In reality, his problems started around the time he tried to publicly shame a woman, if not well before then. 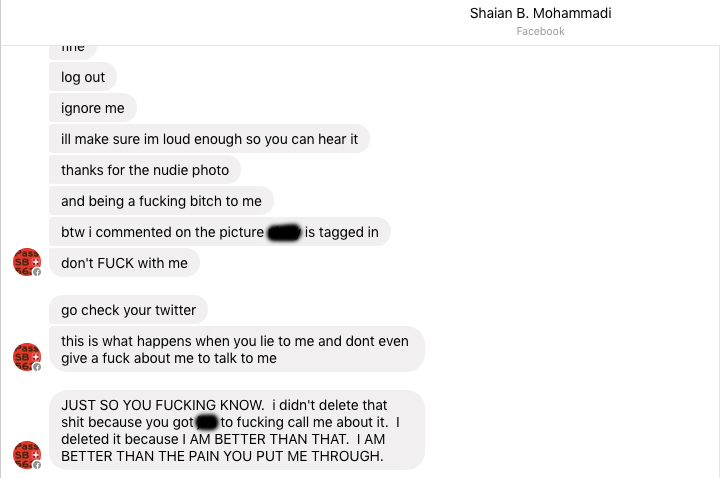 Some of the threatening messages Shaian Mohammadi sent to a woman he briefly dated years ago. San Jose Inside redacted the names of their mutual acquaintances. (Source: Facebook)