The first round of results had just dropped when Fly stumbled into San Jose Councilman Johnny Khamis’ election party at Bossman’s Pizza. His head hung low.

“I thought our message would resonate more with the public than it looks like it has, but I’m optimistic about the future of California nevertheless,” he said with a sigh.

But what shocked his supporters the most is that Khamis—an independent who left the GOP a couple years ago—lagged behind Republican Robert Howell. The mechanical engineer is a newcomer to politics with no campaign website or mailers, unlike many of his well-funded competitors.

“I expected Dave Cortese to be at the top,” Councilwoman Pam Foley remarked. “The rest kind of surprises me. … Some of the names I hadn’t even heard of are further up in the numbers.” She pondered whether conservative voters saw the (R) next to Howell’s name and automatically checked the box.

Ann Ravel’s election night shindig at Los Gatos Soda Works doubled as a belated party for one of her top volunteers, Arlene Rusche, with a double layer chocolate cake for her March 1 birthday. Rusche, who just bought a shiny new Tesla, snagged the slot as driver for the State Senate hopeful. “I love to drive,” she gushed. 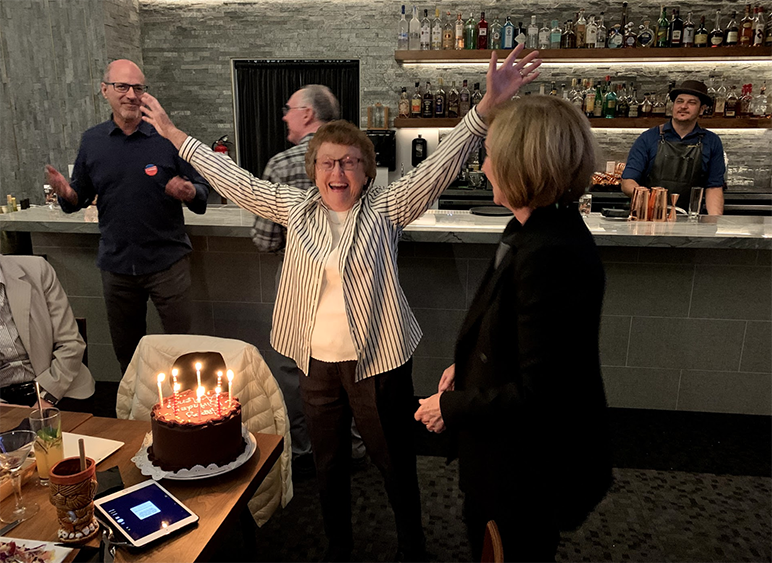 Ann Ravel (right) celebrated one of her supporters’ birthdays at her election night gathering. (Photo by Grace Hase)

Two-fifths of the county board of supes joined Ravel at the soiree: Susan Ellenberg and Joe Simitian. Ellenberg’s husband—Steve Ellenberg—joked with Simitian about the tight re-election race the veteran North County supervisor ran, scooping up 100 percent of the vote on Super Tuesday since his only challenger dropped out of the race before his name even wound up on the ballot.

Moments before the first round of results dropped, Ravel, a former FEC chair, told Fly that she was going to refrain from being “deflated or depressed” until all the ballots—including the ones mailed in today—were counted. The race to replace soon-to-term-out state Sen. Jim Beall was a crowded one, with seven contenders.

As of today, Cortese—who claims strong support from organized labor—held strong with nearly 33 percent of the vote against 20 percent for Ravel. The two will now have to face each other in a fall runoff.

Cortese celebrated his win at a volunteer appreciation event, where Assemblyman Ash Kalra (D-San Jose)joined him after landing a decisive victory in his own right. 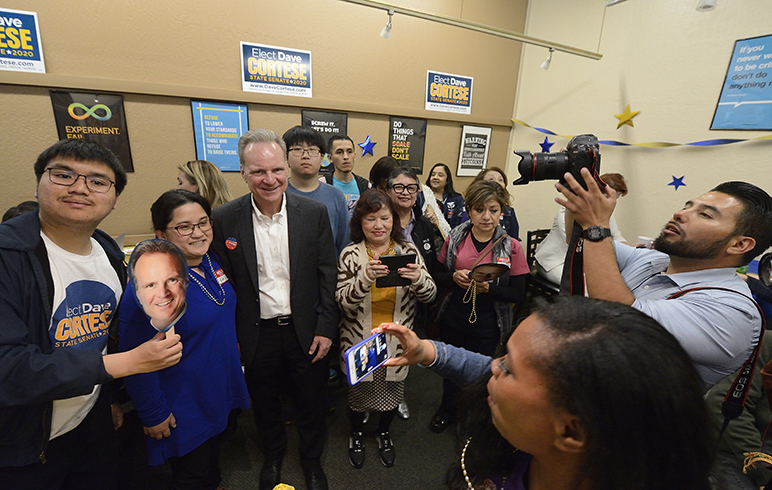 It was a full house at Dave Cortese’s watch party. (Photo by Greg Ramar)

Correction: A previous version of this story noted that the Tesla belonged to Ann Ravel and not Arlene Rusche. San Jose Inside regrets the error.