With four weeks to go until California’s primary election, the mudslinging is in full force in some of Silicon Valley’s local races. Labor groups are throwing everything they have at the San Jose City Council District 8 contest as they fight to keep Councilwoman Sylvia Arenas in her seat for another four years. 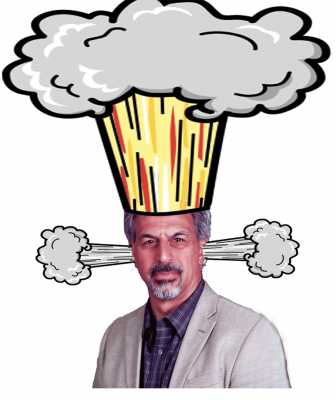 The cop-sponsored anti-Zito site features a cartooonified GIF of the challenger’s head exploding, face flushing beet red and smoke billowing from his ears. His eyebrows also appear to be edited to give him a more menacing look. In bold white-and-peach font just over the comical effigy blares a question: “Can Jim Zito control his temper with women?”

The website also brandishes records from his 2007 divorce-and-custody battle with his ex-wife Zoe Bizzell-Zito.

The cited case file shows that a Santa Clara County Superior Court judge had more to decide than how to divvy up the kids’ holidays between mom and dad. Apparently, the court also ordered Zito to complete a 16-week “accountability in relationships” class.

Scroll to the bottom, and there’s a promise that there’s “more to come.” The final statement, emblazoned over a red banner, declares that the information unveiled “makes you wonder what kind of man Jim Zito is.”

POA President Paul Kelly defended the attack ad as a public service. “The San Jose Police Officers Association will always support standing up to a bully,” he told Fly. “And in our opinion, what these court documents reveal is that Jim Zito is a bully and does not have the temperament and respect for women to be an elected official.”

Zito did not respond to calls for comment by press time.