Measure B (see Evergreen Homes Initiative: A Wolf in Grandma’s Clothing) is a blatant attempt by billionaire developers to do an end-run around environmental review and the crucial public processes we have in place. 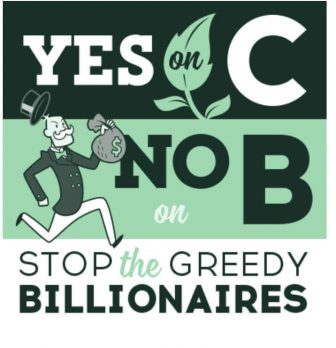 By touting the measure as “senior housing,” these developers hope to fool voters into allowing them to destroy 200 acres of hillsides in Evergreen in order to build a gated community of luxury homes.

Even worse, Measure B would spur similar sprawling residential development all across the city—including in the farmland and wildlife habitat of Coyote Valley.

An independent study of Measure B found that it could cost the city $24.5 million per year, increase vehicle traffic across the region, and weaken San Jose’s affordable housing requirements.

Measure C, by contrast, protects our communities and the environment by putting limits on residential sprawl out on the edge of the city. The hillsides and open fields that border San Jose—Coyote Valley, the Evergreen foothills, Almaden Valley—are critically important wildlife habitat, and Measure C would protect them by restricting developers’ ability to build on the urban edge.

In addition, Measure C would require those developments to comply with “zero net energy” design standards and use recycled water for landscaping, as well as make at least 50 percent of the housing units affordable to moderate and low-income families.

The dangers of sprawl go beyond the impacts to open space and wildlife. When developers sprawl out onto cities’ hillsides and farmlands rather than building compact, infill development, taxpayers shoulder the burden. It costs more to provide police, fire and infrastructure services to far-flung development, and public transit can’t adequately serve these outlying areas—resulting in more residents in more cars clogging the highways and city streets.

If Coyote Valley were paved over with residential sprawl, all of those commuters would have no choice but to hop in their cars and  onto the freeways to get to work. If instead, new housing is built according to San Jose’s general plan that the developers are trying to overrule, that development will be next to transit and within walkable neighborhoods.

Remember: Measure B is for Billionaires, Measure C is for Community. Vote No on B and Yes on C when you receive your ballot or at the polls this June!

Sergio Jimenez is a San Jose councilmam for District 2. Mike Flaugher is a member of the board of the Santa Clara Valley Open Space Authority. Alice Kaufman is legislative advocacy director of Committee for Green Foothills. Opinions expressed in this article are the author’s own and do not necessarily reflect those of San Jose Inside. Want to submit an op-ed? Email pitches to [email protected].