In the age of streaming video on demand and elaborately interconnected superhero movies, anyone in the business of curating film festivals or a one-off screening series must ask themselves why they’re doing it. And, in fact, this is a hot topic in social media circles at the moment.

A purveyor of recherché cinematic experiences might use phrases like “culturally enriching,” “global perspectives” or “under-represented voices” to vaunt the aims of their organization. Though these are not vapid or illegitimate notions, they are vague enough to lose a war with a couch and 65-inch television in 2018.

Meanwhile Cinema Club, a Silicon Valley institution since 1996, has begun a breakout season of alternative programming by refusing to act on platitudes, showing little concern for convention or comfort zones. 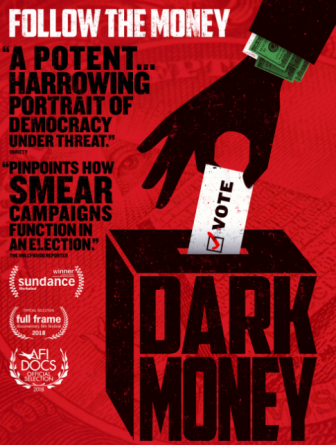 On Father’s Day we screened the acclaimed French divorce thriller Custody, in which an estranged father terrorizes his ex-wife and children. If you’ve never seen 100 people discussing the point at which they knew a character in a movie was a “bad guy,” well, it’s excruciating to emcee the thing but unspeakably rewarding to witness.

At our July 16 screening, the discussion is likely to shake the pillars of every parking garage in downtown San Jose, as Cinema Club has partnered with Santa Clara County to bring the documentary Dark Money to town.

For an educated, liberal populace, the theme of Dark Money will sound like a foregone conclusion: seemingly untraceable corporate money is being funneled into political campaigns? AND?! But by zeroing in on the unique sociopolitical texture of Montana, this down-home documentary reveals that self-reliant red state denizens—most of them Republicans, in fact—are titans of resistance to the corruption being perpetrated by their colleagues in state government (if you ever wondered about the finer shadings between libertarian values and “classic” conservative ideology as they play out in the mountain states, the interviews and slice-of-life moments here are juicily illuminating).

This film has a thesis, certainly, and a “liberal agenda,” if you fancy the phrase. But unlike, say, Michael Moore, Dark Money director Kimberly Reed is not stirring the pot by sensationalizing tragedy or name-calling. This is an investigative documentary for discerning viewers. Its conclusions, perhaps because they are inarguable, are delivered with grace and good taste. It never even breaks a sweat.

Dark Money gives us ragtag, far-flung, fiercely independent heroes unlike those that dominate our line of sight at the movies this time of year. In keeping with the spirit of the mountain states, the team doesn’t come together. And that’s another level on which this film generates appeal: it’s inspiring to see how much a determined individual armed with integrity and conviction can achieve in this country, even today.

After the screening, we’re hosting a panel that includes several noteworthy guests: Ann Ravel, chair of the Federal Election Commission under the Obama administration; John Adams, the peripatetic reporter at the center of Dark Money who teased out the threads of political corruption in Montana; Dan Morain, formerly of the Los Angeles Times and Sacramento Bee, now senior editor at CALmatters; and moderator Cindy Chavez, a Santa Clara County supervisor.

The screening is open to the public and tickets are still available. Click here to buy your stub and click here to learn more about Cinema Club.

Alejandro Adams is a Silicon Valley-based filmmaker who has earned accolades in Variety, Village Voice and the New York Times. He teaches film at various the Bay Area institutions and curates the Cinema Club screening series. Learn more at alejandroadams.com. Opinions in this article are the author’s own and do not necessarily reflect those of San Jose Inside. Send op-ed pitches to [email protected].