The Santa Clara Valley Transportation Authority (VTA) has installed steel railings along the tracks of the light rail in parts of downtown San Jose as part of a six-month pilot project to speed things up along certain routes.

If the $1.1 million test run is successful, VTA officials say they may further extend the railings along the tracks in the city’s center to prevent people from walking in front of moving trains, which is a routine problem for light rail operators who can barely travel at 10mph through most of downtown.

Manuel Perez, a building manager who works in downtown, said he welcomes the railings because he often sees people distracted by their cell phones walk onto the tracks. Worse still, he said, are the cars that cross the light rail lines.

Nathan Pendleton, who owns Nox Cookie Bar across from a light rail station on South Second Street, seemed less enthused about the railings because of their impact on foot traffic. “We’re seeing less of our light rail, VTA bus [riders] grabbing a cookie and then running to catch the bus,” he said. “We still get them, but it’s not the spontaneous action of cutting across the tracks.”

The railings are just one of several changes being implemented by the VTA in the coming months. Starting on Dec. 28, the local transit authority will roll out a more frequent bus network and a new orange light rail line connecting San Jose’s Alum Rock area to downtown Mountain View. 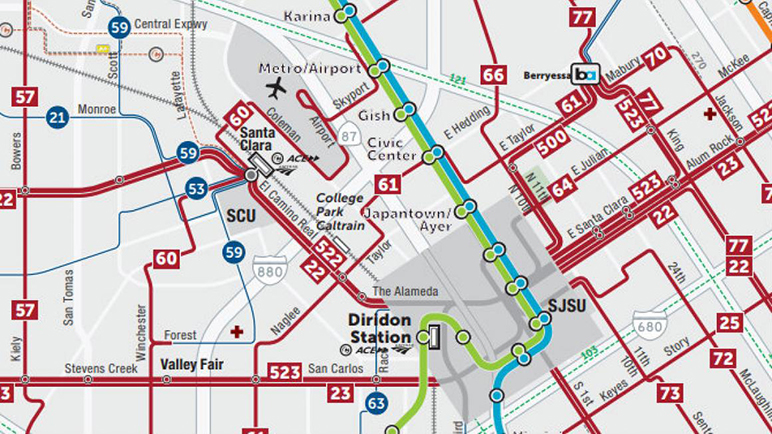 VTA has unveiled new routes and schedules as part of its 2020 service plan. (Map via vta.org)

As part of an effort to streamline service and save costs, however, the VTA will turn to outside agencies to transport riders along some of its express routes.

To date, Stanford Research Park and VMWare have committed $605,000 to help fund routes 101, 102, 103 and 104. Juniper Networks and Lockheed Martin will contribute approximately $189,000 to help fund Route 121. There is also a possibility that the latter two companies will want to add a couple stops in South San Jose, making the route function more like a hybrid of routes 121 and 122.

The VTA will also discontinue express bus routes 120, 140 and 180 from Fremont and Warm Springs BART. The 181 Express will continue to operate between Warm Springs and downtown San Jose’s Diridon Station until BART starts carrying passengers to its new stations in Milpitas and San Jose’s Berryessa neighborhood at some as-yet-unspecified date in 2020. The 181 will no longer serve the Great Mall, however, and will add a stop at the I-880/Alder Station and serve the new Milpitas Transit Center.

Despite initial plans to end overnight rides on the VTA’s only 24-hour transit line, the agency will maintain Route 22—known as Hotel 22 because of how often unhoused passengers rely on the line for warmth—as a round-the-clock service.

Even though VTA will continue the overnight service, it wrote in a blog post that “there is broad consensus that Route 22 is not an ideal overnight housing solution, and staff will continue discussions with the social service task force partners to develop more appropriate shelter solutions.” After all, it’s a costly route to operate, one that costs $500,000 a year with 200 to 220 daily boardings across six trips from 1 to 4am.

To learn more about the coming changes, click here. You can also plan your trip with the VTA-endorsed Transit app, check out the How to Ride quick-start guide and sign up for the agency’s email onboarding series.