At Valley Palms Apartments, where at least 1,100 people live in 354 units, the tennis courts double as a soccer field. Instead of turf, there’s a fenced-in asphalt rectangle—its abrasive gray topcoat riven by cracks and huge patches of chipped pavement.

“My husband used to warn me every time I played out here with the kids, saying it’s dangerous,” 34-year-old mother-of-two Claudia Gonzalez said while lightly kicking the tip of her shoe on the hard surface. “It’s easy to trip and it hurts when you fall.”

Still, the children of Valley Palms risk the scrapes and cuts on the court because it’s one of the few recreational options around in an East Side San Jose ZIP code with the second-highest juvenile arrest-and-citation rate in Santa Clara County.

The neighborhoods within 95122 are so wracked by gang violence that recreation and after-school activities have drawn hundreds of thousands of dollars in public investment as part of a multi-agency crime-prevention effort. “The kids need something to do,” Gonzalez explained. “Especially in the summer, when you see a lot of gang activity.”

As part of a tenant coalition called Valley Palms Unidos, Gonzalez spent the past year imploring apartment owners KDF Communities to convert the crumbling tennis courts into a soccer field. The group has also asked for bolstered security, equal access to an on-site family resource center and a new property management company.

Now, after months of grassroots lobbying, it looks like KDF will agree to the terms. The landlord’s willingness comes in no small part because San Jose found a way to leverage what limited authority it has over the property’s refinancing.

Valley Palms is among the densest local housing complexes in San Jose. (Photo by Jennifer Wadsworth)

KDF Communities is asking the California Statewide Community Development Authority (CSCDA) for permission to secure $120 million in tax-free bonds to refinance and upgrade the 54-year-old complex on Lanai Avenue for the first time since 2002. As a member of the CSCDA joint powers authority, San Jose will hold a public hearing on the borrowing plan at Tuesday’s City Council meeting to comply with the Tax Equity and Fiscal Responsibility Act of 1982, known as TEFRA.

CSCDA was created in 1988 to enable local governments and eligible private companies to access tax-free debt in exchange for providing some public benefit, such as affordable housing or economic growth. Typically, the promise to keep its units market-rate for another 55 years—as proposed for the KDF deal this week—would be enough.

Instead of just signing off on the proposed bond issuance, the city raised the bar this time by weaving tenant demands into the deal.

Jeff Scott, a spokesman for the San Jose Housing Department, called the strategy unprecedented. “This is a first for a TEFRA project in San Jose,” he wrote in an email today. “The community has expressed several concerns about this development. Fortunately, we were able to negotiate changes to the proposed rehabilitation and address neighborhood concerns prior to moving ahead with the refinancing.”

On Thursday, when it was still unclear how KDF would respond to the offer, Councilwoman Maya Esparza prepared one memo in case the company objected and another if it agreed to the terms. If KDF refused, the D7 rep—whose council district encompasses Valley Palms—said she would elevate the matter to the county level.

With so much money at stake, KDF ultimately consented. By holding the line, Esparza and city housing officials made sure the company didn’t have much of a choice.

KDF Communities’ last bond 2019 bond issuance expired on Feb. 5. If the city refused to renew it, that would force KDF to re-apply under a new regulatory framework that caps bond allocations at $50 million per project.

“The Valley Palms project would not be able to obtain … a bond allocation and 4 percent tax credits if we were to re-apply today,” Mark Hyatt, co-founder and managing partner of KDF Communities, wrote in a Feb. 19 letter to San Jose Housing Director Jacky Morales-Ferrand. “Approval of TEFRA allows KDF to maintain the bond allocation and tax credit award and move forward with the proposed renovation that addresses the key priorities identified by the city and local community association.”

Under the proposal now up for review, KDF would earmark $15.7 million of the bond revenue toward property improvements and other priorities requested by tenants.

In a memo dropped Monday afternoon, Esparza calls on her colleagues to approve the deal and to require status updates every six months to make sure that KDF complies with the terms. “The residents of Valley Palms are some of the hardest working, most underserved members of our community,” she wrote in the recommendation, “and we owe it to those residents to use this opportunity to address these ongoing issues, and help them build a stronger, safer community for their families.”

The city’s housing division also suggests setting deadlines for some of the planned upgrades, giving the company six months from bond issuance to install security cameras and exterior LED lighting and find a new property management firm. The soccer field conversion and expansion of the family resource center must be completed within a year.

Meanwhile, according to a March 5 policy memo from Morales-Ferrand, KDF Communities will work with the San Jose Police Department on safety measures and share information with officers as needed.

Additionally, the city will require KDF to create a grievance process and tenant participation plan, survey residents to ensure that services align with their needs and translate lease documents into Spanish and Vietnamese. The CSCDA also agreed to allow the city to monitor the safety and security of the property.

Access to the family resource center, a small single-story facility by one of the swimming pools at the complex, has been another huge sticking point for Valley Palms Unidos.

In 2017, the Santa Clara County Probation Department’s Neighborhood Services Unit allocated $173,263 to the Los Angeles-based nonprofit Project Access in exchange for another few years of staffing the center for at least 40 hours a week. Since 2016, the center has given the county, city and nonprofits a space to coordinate violence prevention activities. During that time, the apartment’s neighborhood association evolved into Valley Palms Unidos, which came up with its own plan to improve safety.

“The approach was working,” county Probation Chief Laura Garnette wrote in a Jan. 31 memo about the collaboration. “The [family resource center] was well utilized and year after year, performance goals were overwhelmingly exceeded and there were no reports provided to the county concerns or otherwise misuse of the [center].”

That all changed last summer.

In June 2019, just as Valley Palms Unidos began to gain traction, Garnette said Project Access banned all organizations without formal MOUs from the family resource center. Project Access also announced that its staff no longer had the flexibility to work nights or weekends. Ever since then, the resource center has been closed except for business hours—when most residents are at work or school. In February, according to Esparza, the center was open for just 15 days. 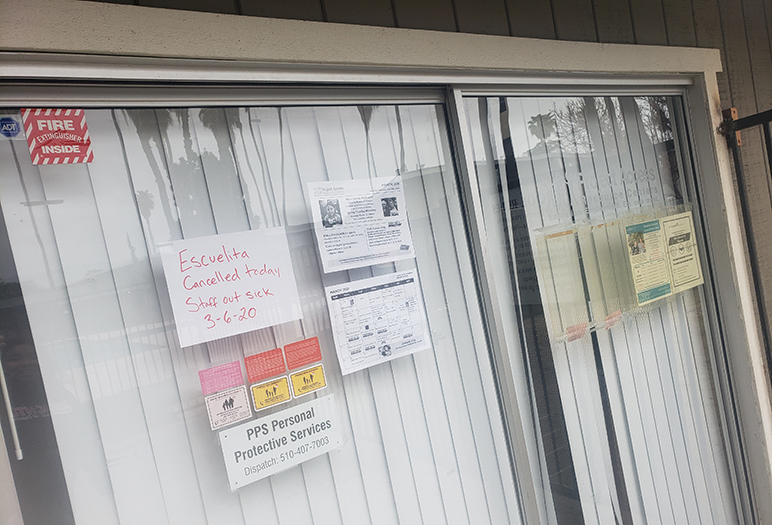 The family resource center at Valley Palms has severely cut back its hours this past year. (Photo by Jennifer Wadsworth)

Garnette said she tried negotiating a use agreement for probation and Valley Palms Unidos, but in her memo slammed the process as “burdensome, complicated and slow.”

Barely two weeks before another shooting took place at the apartment complex, Valley Palms Unidos penned a letter that echoed many of Garnette’s concerns.

“The Valley Palms Unidos supports equal access to existing (and future) family resource center space because we have learned through our root-cause analysis of violence in our neighborhood that active communities are safer communities,” the group wrote in a Jan. 30 letter to the City Council. “We have worked hard to complement the services of Project Access by coordinating and promoting pro-social activities that are culturally relevant, accessible to our community and responsive to the goal of preventing violence in and around Valley Palms. However, recent actions to restrict access to the family resource center have halted all programming—putting our children and our neighbors at risk.”

KDF has come under fire for mismanaging properties before. In 2018, Redwood City fined the company $35,000 for leaving a 72-unit affordable apartment complex called Hallmark House abandoned since a 2013 fire. Earlier this year, KDF asked the city to authorize $25 million in bonds to renovate that same complex on Woodside Road.

In San Jose, KDF Communities owns Foxdale Village Apartments, which remains in un-repaired since a two-alarm fire killed a woman earlier last year. Valley Palms Unidos noted in its Jan. 30 letter that the same KDF-hired property managers they’ve been battling at their complex runs Foxdale, too.

Tenants say both sites experience similar problems, including illegal unannounced inspections and dangerous disrepair, such as sparking stovetops. One Valley Palms tenant, who chose to remain anonymous for fear of reprisal, says she had to pay full rent despite enduring a hole in her ceiling for eight months.

In a phone call Monday afternoon, Esparza applauded the landlord for cooperating. “I feel very good that KDF came to an agreement with both the city and county,” she said. “I hope they honor that agreement—or we will hold them accountable.”

On Tuesday, Gonzalez plans to join several of her neighbors and Valley Palms Unidos cohorts to speak at City Hall in favor of the conditional refinancing. “I’m glad that they’re taking this seriously,” she said. “I’m glad they’re listening.” 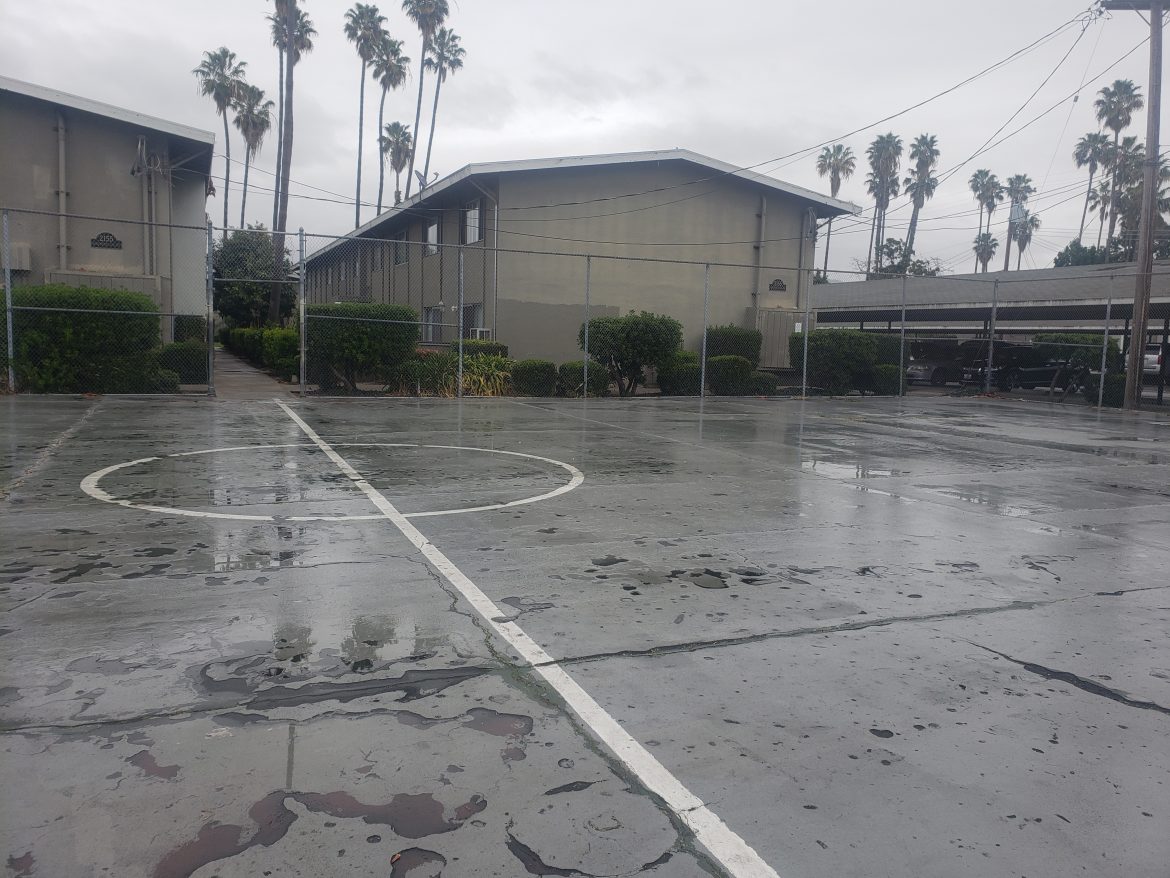 KDF agreed to spend $100,000 to replace its cracked tennis courts with a soccer field. (Photo by Jennifer Wadsworth)