With shakeups in the U.S. Postal Service stoking fears about a deliberate attempt to undermine mail delivery ahead of election day, it’s no wonder the flyers struck a nerve.

Taped on dozens of USPS collection boxes throughout the South Bay, the notices announced an impending extraction of the signature blue bins “due to low volume.”

Retired Santa Clara County Judge LaDoris Cordell published a photo to Facebook of one such advisory on a box in Palo Alto—the only one within a two-mile radius.

“All of a sudden the mail volume is so low that they are shutting our mailboxes down just 80 days before the election?” she wrote in a comment posted alongside the photo. “Permanent removal is probably next.” 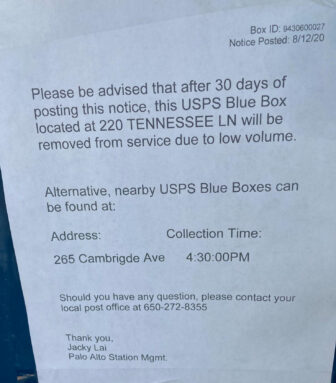 One of the dozens of notices posted on local collection boxes this past week. (Photo by LaDoris Cordell, via Facebook)

The Facebook post garnered scores of comments, some likening the blue box purge to voter suppression, others urging people to sound the alarm with lawmakers.

Similar removals were reported in Oregon, Montana and New York, along with stories of dismantled mail-sorting machines, prompting a flurry of news coverage and letters from lawmakers demanding answers.

When San Jose Inside reached out to USPS spokesman Augustine Ruiz Jr. for information about the local removals, he sent back a boilerplate response about how it’s all part of a routine process in which scarcely used bins are taken out of service.

“For decades, the installation and removal of the Postal Service’s iconic blue collection mail boxes from streets across the country has been based on mail volume received in those boxes,” he wrote in an email seemingly made up of copied-and-pasted paragraphs from USPS fact sheets. “It is a fluid process and figures can vary from day-to-day. Historically, mailboxes have been removed for lack of use and installed in growth areas. There are nearly 142,000 blue steel collection boxes nationwide.”

Generally, the metric for decommissioning a dropbox is if it receives less than 25 pieces of mail a day, the email explained.

“When a collection box consistently receives very small amounts of mail for months on end, it costs the Postal Service money in fuel and work hours for letter carriers to drive to the mailbox and collect the mail,” Ruiz wrote. “Removing the box is simply good business sense in that respect. It is important to note that anyone with a residential or business mailbox can use it as a method to send outgoing mail.”

The mail-volume assessments are called “density checks,” he added, and have been standard practice for many years.

Asked for local data on the practice, however, Ruiz said he had none.

“I do not know how many, or if any, are being removed from Santa Clara County,” he wrote, adding that he would follow up once he does know.

While the spokesman presumably poked around for answers, San Jose Inside called the number listed on one of the taped-up removal advisories: 650.272.8355. The gentleman who picked up the phone was slightly more helpful than Ruiz.

The clerk explained that the Palo Alto branch is at the tail-end of a months-long test to measure which boxes are least used and now plans to nix anywhere from 30 to 50 of the bins that got fewer than 15 pieces of mail a day. He said he didn’t have the total number of collection boxes in the city or the county but that each posted notice should direct people to the next-closest drop-off bin.

As San Jose Inside proceeded to call other Silicon Valley branches with the same questions about collection box takedowns, Ruiz circled back with an update.

“We are suspending the removal of collection boxes at this time,” he wrote in a late afternoon email. “All postings on collection boxes will be removed, as we will no longer be pulling any boxes. This has to do with boxes on the Peninsula, including Palo Alto.”

What prompted the decision?

“Not sure,” he said in a separate email.

Then who should we talk to for answers?

By day’s end, Ruiz had yet to relay any rationale. He also never followed up with the number of boxes stationed in Santa Clara County.

In the meantime, anyone trying to find the nearest dropbox can do so via this handy USPS search tool, which pinpoints the exact location of every single one in the U.S.

A search of all collection boxes within a 25-mile radius of downtown San Jose results in a list of 199 locations. With all the conflicting information being relayed to the public from one branch to another, however, it’s unclear whether the listings are even up to date.

Mail collection boxes, which the U.S. Postal Service began using in 1858, have been the subject of multiple audits by the USPS Office of Inspector General (OIG).

In a 2017 report on the collection bins, the OIG found that the USPS failed to effectively manage out-of-service boxes, lacked consistent policies about how and when to remove them and often left customers in the dark.

“Without clearly defined policy and procedures,” the report presciently cautioned, “the management of out-of-service boxes will not be consistently applied, which may negatively impact management decisions and service to the public.”

The uncertain fate of the iconic blue boxes is merely a symptom of much deeper problems in the U.S. Postal Service.

Long before the present pandemic entered the equation, the USPS was pushed to the brink of financial ruin by a 2006 law requiring it to pre-fund several decades of retiree health benefits—a condition unheard of for any organization, public or private.

Yet the agency has been excluded from federal relief efforts as President Trump—by his own admission on Thursday—holds up a stimulus package over demands for postal funding. The reason for the hold-up? Because he says he worries the money would be a little too helpful to the USPS as it prepares for an anticipated influx of mail-in ballots.

Since Trump appointed him postmaster general in June, DeJoy has enacted disruptive changes, including a clampdown on overtime and reassigning a host of high-ranking executives, that have reportedly led to mail delivery delays throughout the U.S.

“[T]he United States Postal Service is a pillar of our American democracy that is enshrined in the Constitution, which empowers Congress to ‘establish Post Offices and Post Roads,’” they wrote in a letter dated Aug. 12. “The Postal Service provides critical services for the American people: delivering medicine to seniors, paychecks to workers, tax refunds to millions and absentee ballots to voters.”

Amid a once-in-a-century pandemic, the letter goes on to state, the timeliness of postal service becomes all the more critical—a matter of life or death.

It also voices concern over how some of DeJoy’s new policies—such as an order to no longer treat election mail as First Class—threaten to disenfranchise voters in one of the most consequential election years in a generation.

The letter ends with the USPS motto—“neither snow nor rain nor heat nor gloom of night stays these couriers from the swift completion of their appointed rounds”—and a plea for DeJoy to “keep the promise provided for in the Constitution to the American people.”