When the American Rescue Plan (ARP) was officially signed into law on March 11, the goal of the $1.9 trillion federal relief package was to reinvigorate the national economy following the devastating pandemic-induced downturn.

Two months after President Biden signed the bill, Bay Area transit riders and transit employees are waiting for $1.68 billion of that fund that went to the Metropolitan Transportation Commission. The money was meant to restore services across the nine Bay Area counties’ 27 transit agencies, all of which are in desperate need of financial assistance. The MTC has instead adopted austerity budgets until July 1, the start of the 2022 fiscal year, as ridership remains well below pre-pandemic levels.

But advocates say they are fed up with waiting for service increases.

Dozens of transit workers, riders and advocates gathered at the Salesforce Transit Center in San Francisco last week to air their concerns about the frozen funds and the future of Bay Area transit. The event was organized by 24 advocacy and alliance groups across the Bay Area, including San Jose’s Amalgamated Transit Union Local 265, the South Bay Labor Council, Working Partnerships USA and Silicon Valley Youth Climate Action.

“We're out here getting passed up, watching overcrowded buses roll right by us, as we miss our doctor’s appointments, school and work every single day,” said Jovanka Beckles, an AC Transit director. “It's hard to not see that what they're doing is, is a deliberate move, that will suppress public transit, as well as the communities that rely on it for years and years to come, especially at a moment when it's so vulnerable.”

Joty Dhaliwal and Nathan Swedlow of the East Bay’s People’s Transit Alliance—two of the event’s organizers—say they hope the advocacy leads to more rapid action. The MTC’s Programming and Allocations Committee met Thursday to discuss recommendations about divvying out the federal relief funding, which would include potential increases to services in the future.

“I think that  [with] public transit being cut, it is people we’re classifying as essential workers who are most impacted,” Swedlow said. “We’re calling them essential, but we’re not doing anything to meet their needs to provide the essential services to get to work.” 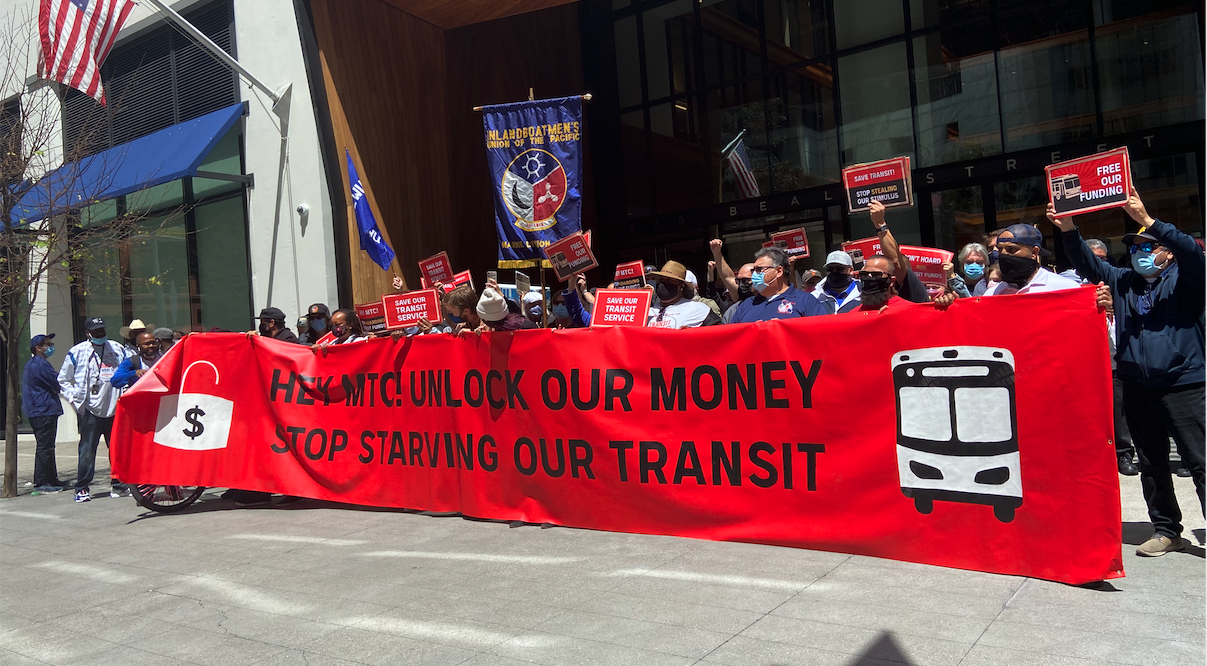 But even before the pandemic, there wasn’t always convenient routes, Dhaliwal said. Pre-Covid-19, her commute from downtown Oakland to Bayview in San Francisco often took about 100 minutes one way and cost approximately $9.

“One of the things I’d like to think about for the ARP funds is how we can use this to reimagine routes and think about increasing service substantially,” Dhaliwal said. “But service is just the bare minimum. To make public transit competitive, we need more service and better routes.”

John Courtney, president of San Jose’s ATU Local 265 and a member of Valley Transportation Authority since 2011, agreed that transit riders’ needs have not been addressed before or during the pandemic.

“In the early days of the pandemic, ATU and VTA were able to work on things together to get the essential personnel moving through the county,” he said. “As we come out of the pandemic and start to re-enter what the post-pandemic world is going to look like, I think the VTA and MTC are missing the opportunity now to do it sooner rather than later.”

One big issue throughout the Bay Area during the pandemic has been the rise of “pass-ups,” in which bus drivers are forced to leave behind riders at stops due to the county’s social distancing measures. Courtney estimates that between 800 and 1,000 pass-ups are happening daily in the county. That could hinder more riders from coming back, he said.

Advocate Monica Mallon—who founded the nonprofit Turnout4Transit to save and improve the county’s transit routes—has dealt with pass-ups during the pandemic as well, but is more concerned that transit service hasn’t been fully restored as offices reopen and restrictions ease.

“There’s not been any service increase since August,” she said. “That’s one of the biggest challenges: to get agencies to increase service so more people aren’t left behind. It’s not an issue of money for the VTA. ... They have plenty of money, they’re just not making it a priority to get services out and plan around that.”

The MTC said in a memo this week that ridership remains down by more than 75% compared to pre-pandemic levels, but acknowledged that the Bay Area has received more than $2.3 billion in emergency transit funding since March 2020.

With that in mind, Therese McMillan, executive director for the agency said in the memo the money the MTC has already gotten will fund “current operating expenditure levels through at least the first quarter of FY 2021-22.”

“This provides a valuable window to shift from looking ‘in the rear-view mirror’ of pre-pandemic assumptions, to looking ‘through the front window’ into what restored or new transit service should be going forward beginning FY 2021-22,” McMillan said in the memo.

Though MTC documents show it is looking at increasing services in its new fiscal budget, Courtney says waiting that long to implement the changes could damage the region’s transit systems.

“I have been told there are people calling in, crying, about not having the proper amount of service out there,” he said. “It’s having a huge impact on the people who need transit the most in our area, who are the underprivileged and underserved.”