Trade unions are bracing for a fight with San Jose over tax breaks for developers. The dispute centers on an incentive that gives half-off discounts on park fees and construction taxes to companies that build residential high-rises in downtown by 2020.

The City Council on Tuesday will consider whether to renew those incentives for the next 1,500 housing units beyond the sunset date this month. But the Santa Clara and San Benito Building and Construction Trades Council said the benefits should extend to local workers, too. Together with the South Bay Labor Union, the trade council is asking the city to require developers to hire locally and pay prevailing wages as a condition of qualifying for the incentives.

If the city eschews those demands, the unions vowed to take the matter directly to voters. Although, the soonest that would happen is 2018, union officials said.

In a letter sent to the city last week, the labor groups cite Measure JJJ in Los Angeles as a template for a ballot initiative in San Jose. Like the SoCal measure, which passed with 64 percent of the vote this past fall, the local version would require companies to pay contractors the region’s prevailing wage and benefit rate.

The measure would mandate that at least 35 percent of a project’s construction hours are performed by local residents and at least 10 percent by groups that struggle with chronic under-employment, such as veterans and single parents. Companies would have to guarantee that 60 percent of the workforce includes graduates of local apprenticeships. To hire from out-of-state apprenticeships, the programs would have to be approved by the state of California.

The proposed measure would also offer alternatives to the above-mentioned standards, as it does in Los Angeles. The first would be a binding labor agreement for all contractors and subcontractors. Developers would also have the option of paying a public safety impact fee to cover the cost of policing and protecting new developments.

Mayor Sam Liccardo said the city has already been looking at similar requirements.

“We're studying the issues raised by the advocates for local hire, apprenticeships, and related issues through a formal task force with labor and business representatives,” Liccardo wrote in a prepared statement. “A local hire and apprenticeship program is already incorporated in the high-rise fee reduction proposal.”

Apartment towers bring economic and environmental benefit to the city, he said. However, he added, despite considerable growth, new high-rise development remains a risky investment proposition.

In a memo co-signed by downtown Councilman Raul Peralez, the mayor notes that the city hasn’t seen developers break ground on a tower in downtown since February of last year. Plus, construction prices have risen by 60 percent in the past 36 months, he adds, while marketing costs have increased and rents have flattened.

“Extending our prior high-rise fee reduction program is critical to ensuring that these projects can secure the financing to get shovels in the ground,” the mayor said. “The real cost lies in doing nothing.”

Meanwhile, developers typically want a guaranteed 20 percent profit margin on each project before breaking ground. Council members who support the tax breaks say they will spur seven proposed towers in downtown. Liccardo, however, dismisses concerns that the tax breaks are a giveaway of public money.

“To the contrary,” he writes, “for several projects, which remain stalled for lack of financing, this can result in a net fiscal gain to the taxpayer if future revenues are properly discounted over time. Why? A project that does not get built will not generate any fee revenue. Regardless of the fee rate, 100 percent of zero is zero.”

Tom Saggau, a spokesman for the trade unions, said he doesn’t buy that line about developers refraining from building unless the city gives them a discount.

“That’s a bluff that ought to be called out,” he told San Jose Inside.

Another talking point that Saggau takes issue with is that city fees have become too cumbersome. In his memo, Liccardo cites rising park dedication and affordable housing fees as one of the main reasons high-rise development has become tough to finance. But the unions pointed to a recent report by Management Partners, a consulting firm hired by the city to study its fee schedules, which found that San Jose has consistently failed to recover the full cost of providing services related to new construction projects.

According to Management Partners, the city delivered $60 million of work for $49 million this fiscal year. In other words, San Jose only recovered 81 percent of eligible costs for providing development services despite a city standard to recover 100 percent. The consultants, who presented their findings at a work group last month, concluded that unless the city re-calibrates its fees, streamlines services or deregulates permits, it will continue to subsidize the cost of development by millions of dollars a year. 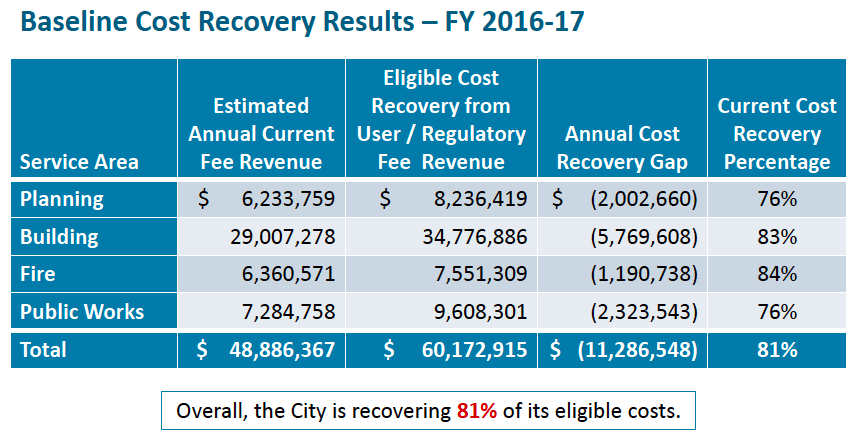 Liccardo and Peralez agreed with the unions that the city should tie at least some of the high-rise incentives to a requirement to hire a certain percentage of workers certified through local apprenticeships. But city staffers knocked that suggestions in a supplemental memo released Friday, citing the need for more analysis.

Construction taxes, park fees and other charges paid to local governments are designed to offset the impacts of development on the surrounding community. Revenue collected from such fees pay for public lands, police, fire and other services. In San Jose, some of those fees pay for below-market-rate housing, since studies have shown that new market-rate development contributes to the inflation of housing costs.

These local offsets often fall prey to political pressure, however. In many cases, through bargaining and concessions in San Jose and elsewhere, developers can shape local planning and urban growth more than elected policymakers. The standard for commercial viability—that 20 percent profit margin—is rarely challenged by local elected officials or advisory planning commissioners.

Builders of residential high-rises already get a pass on a citywide $17-per-square-foot affordable housing fee. Last week, the council debated whether to give even more developers a break on that impact fee, too. But the council shot down the proposal. Affordable housing advocates criticized the city for even considering chipping away at the fee—especially considering that not a penny had been collected on it yet.

More from the San Jose City Council agenda for December 13, 2016: