In a 7-3 vote Tuesday—with Don Rocha, Xavier Campos and Ash Kalra opposed and Kansen Chu absent—the City Council adopted a motion that restricts pot clubs from all but a small fraction of parcels citywide. All but about 10 will have to shut down by next year.

Remaining shops will have to comply with strict new rules. They’ll need 24-hour security and keep store hours from 9am to 9 at night. They can’t sell candy flavored product. They have to grow all marijuana in or next to Santa Clara County and can only sell product they cultivated themselves to make sure it isn’t coming from gangs and drug cartels. Employees have to be at least 18 years old and without a criminal record. They have to prohibit loitering. And customers can’t get high at the collective.

Distance requirements will squeeze out the bulk of pot businesses, too. They have to be at least 1,000 feet from schools, parks, anywhere children gather and business parks, including Edenvale and International Business Park. They have to stay 500 feet away from drug rehab clinics and 150 from homes. That leaves 600 parcels in the city, most in north San Jose and the East Side. 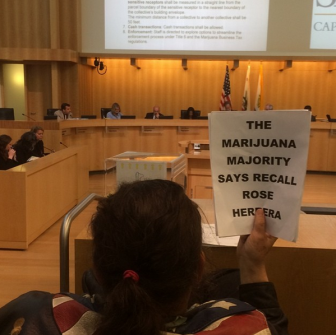 “This will provide critical tools for San Jose police and code enforcement officers in taking action against the bad operators,” Michelle McGurk, Mayor Chuck Reed’s spokeswoman, wrote in an email after the decision. “It is important to note that all medical marijuana facilities operating in San Jose are currently illegal under the zoning code. They have proliferated during the city’s recent budget crisis due to short-staffing in code enforcement. This has had a significant impact on our neighborhoods and community.”

A recent city-led survey found that 60 percent of San Jose residents wanted comprehensive pot regulations, she said. City leaders tried to pass regulations five years ago, imposing a 10-club cap, but the ordinance was overturned by referendum. The population of clubs boomed in the ensuing years, reaching more than 100 at one point. City leaders began to fear that the businesses attracted blight and crime and made it easier for children to get their hands on the drug.

In the absence of regulation, city leaders enacted a marijuana business tax, which demanded 10 percent of gross receipts from collectives. Only a fraction complied, however. Some held out, arguing that it wouldn’t pay an agency hostile to their enterprise. The city collected about $5.4 million from tax in the past year. 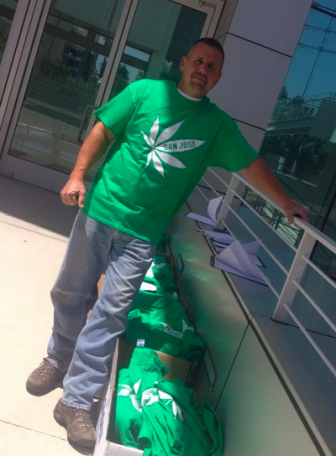 Pot club proponents showed up to the council meetings in green T-shirts emblazoned with a pot leaf. (Photo: Dave Hodges)

Under the rules passed this week, shops out of compliance with that tax will have to close.

Limiting eligible property to a small number of parcels will benefit a few select landlords, he added.

“This is a nascent industry on the verge of legalization,” he said. “The value of that real estate just doubled or tripled. People will come knocking. You can look up the title on those 600 properties and send those people a letter of congratulations because the council just handed them a huge check last night.”

Another loss for clubs: the restrictions on edibles that will force collectives to make their own or stop selling them.

“It’s like suddenly saying that every pharmacy has to compound their own medication,” Anthony said. “You’re going to get lower standards or nothing at all. It’s pushing everybody back into grandma’s kitchen and out of the commercial production facilities. Those edibles are the option for patients who cannot or don’t want to smoke their medicine. The professionally made tinctures, capsules, the different edible medication and lozenges—that’s all pretty much gone now. And for a lot of people that’s extremely unfortunate.”

Anthony plans to get an initiative on the fall ballot that would offer a laxer set of rules. Sensible San Jose, which gathered 38,000 signatures, spells out its proposal here. Another effort, led by Dave Hodges of the Silicon Valley Cannabis Coalition, seeks to place their own ordinance on the November ballot, one that would establish a cannabis commission to help oversee the local industry.

“For the past five years the council has taken the wrong approach to cannabis clubs,” said Hodges, who had to file his initiative with the City Clerk five times to meet criteria they said he was missing. “Creating regulations that make it impossible to operate does not move San Jose forward.”

Nearly every other city in the region has enacted an all-out ban on dispensaries. At a meeting later this month, the county Board of Supervisors will consider prohibiting them in unincorporated areas. Councilman Sam Liccardo said Tuesday that a county ban would likely push more pot shops into San Jose.