Inadequate policies and procedures led to numerous mistakes in Santa Clara County’s election office, according to a newly released state audit. Over the course of 30 elections from 2010 through last year, the county’s Registrar of Voters (ROV) reported 26 errors in creating and disseminating election materials, the California State Auditor’s office found.

But rather than bolstering contingency plans to prevent future slip-ups, auditors stated, the county addressed each mistake on an ad hoc basis.

“Because some of the more significant errors Santa Clara [County] experienced were related to mapping and to inaccuracies in ballots and voter information guides, we expected to find that it had developed comprehensive policies and procedures to prevent these types of errors from recurring,” per the report. “However, it has not done so.”

The probe—ordered by the Joint Legislative Audit Committee at the urging of Assemblyman Evan Low (D-Campbell)—also called for stronger oversight of county election divisions by the California Secretary of State. Although the state enforces election laws and ensures that counties conduct elections efficiently, it doesn’t oversee voter materials to make sure they’re in compliance.

The county’s errors ranged in significance from minor typos to sending the wrong ballots, and issues largely stemmed from faulty maps, insufficient proofreading and weak oversight of vendors, according to the audit. In each of the past dozen years, for example, the county sent ballots to about 850 voters that didn’t include the contests or measures relevant to their respective community college district.

Vendors were responsible for seven of the 26 errors cited in the report, including times when software used by a company assigned voters to the wrong precinct. But in six of those vendor error instances, the county failed to seek reimbursement from the contractors. The cost of a single mistake could exceed $250,000, according to the audit.

The report also criticized the county for failing to adequately inform voters about what caused the mistakes or what it would do to prevent them from happening again. That kind of information should be part of the post-election reports that the registrar’s office produces anyway, auditors said.

Fortunately, Low said, none of the mistakes impacted the outcome of any election. Further, preventing future errors will require only a low-tech fix.

“When I met with state auditors about this, I asked them what caused these problems—was it a lack of resources or a lack of staffing and people power?” Low said. “The answer was no. The problem was that the issues were not clearly articulated in writing. The result was that when when errors occurred, they would take it on a case-by-case basis instead of putting into writing what the context was. That’s what was missing.”

Though the problems uncovered by the audit were systemic, Low added, they largely predated county ROV Shannon Bushey, who took over the department in 2014.

In a press release, Bushey said she welcomes the audit’s recommendations, which include adopting more detailed rules and procedures as a way to convey institutional knowledge going forward.

“We appreciated the opportunity to have an outside agency come in and review what we do and how we do it,” Bushey said. “We commend the California State Auditor for its efforts in explaining the complexities of our election process in the report.” 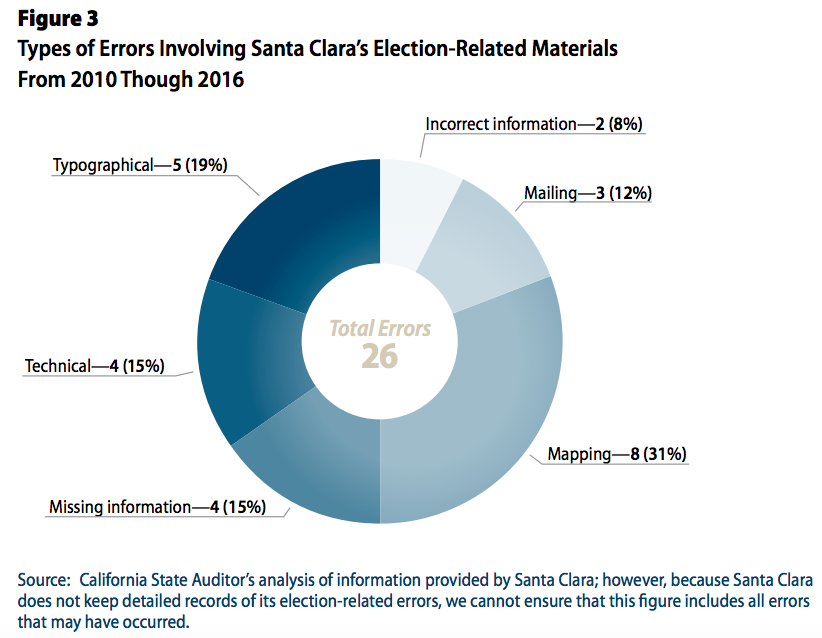