San Jose approved two tax hikes last year to fund core city services, such as repaving dilapidated roads and building up a depleted police force. But the $52 million-a-year in revenue collected from Measure B’s quarter-cent sales tax and Measure G’s business tax is being eaten up by the city’s soaring pension costs, according to an analysis by Stanford University’s Institute for Economic Policy Research.

The City Council on Tuesday will discuss the Stanford report, which Mayor Sam Liccardo ordered earlier this year to review an internal audit of San Jose’s retirement plans.

Unlike a special tax measure, which needs super-majority approval and restricts revenue to a specific purpose, the two passed by voters in 2016 were general tax initiatives requiring only a simple majority to raise money for the general fund. With budget shortfalls projected over the next several years and pension liabilities continuing to increase, there’s growing concern that the city is failing to deliver what it promised.

Since San Jose voters OK’d measures B and G, the city’s projected pension and retiree healthcare costs rose by $29 million more than anticipated in 2018 and $57 million more by 2021. By paying the difference from the general fund, the city will basically offset the additional tax revenues.

Unlike private 401(k) accounts or defined-benefit plans that depend on investment returns, public-sector employees are guaranteed an annual benefit based on set formulas. Thus, even if the stock market performs poorly and liabilities rise, the pension payments remains the same, forcing cities to scale back other services to cover the cost.

As pension costs more than tripled over a decade in San Jose, the city tried to rein in liabilities by enacting a controversial voter-approved reform measure, which ignited a years-long legal battle between City Hall and its public employee unions. In 2016, the city finally reached a compromise measure, which promised to save taxpayers money even as San Jose reached about $3.8 billion in unfunded liabilities this past fiscal year.

Stanford researchers Joe Nation, Olympia Nguyen Tulloch and Clive Lipshitz spent the past several months evaluating San Jose’s federated and public safety pension plans against those in other major cities in the Bay Area and beyond. They found that San Jose is especially prone to weaker investment performance because of the shortfall of contributions compared to benefit payments. San Jose—like most U.S. public plans, but to a greater extent than peer cities—saw the highest increase in retirees and the largest decrease in the number of new members actively paying into the system. 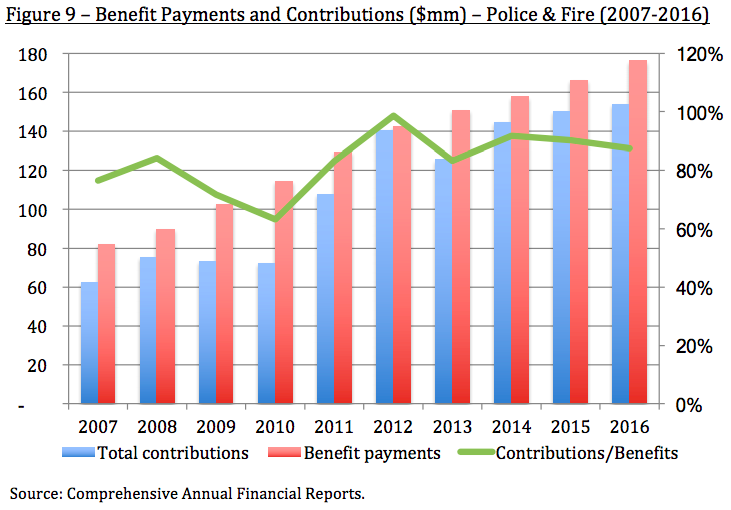 Though San Jose is hardly unique in this regard, the funded status of the city’s public pensions has deteriorated over the past several years to 72 percent for the police and fire plan and 50 percent for federated employees.

Researchers suggest that portfolio management can be an important tool to address that funding shortfall. However, compared to other cities in the study, San Jose already pays more to manage its pair of pension plans. While most other plans have an investment staff of one or two people, San Jose has 10.

“Over the last 10 years, reforms to the city’s retirement plan structures has populated the boards with members possessing greater professionalism and expertise,” Liccardo wrote in a memo requesting the Stanford analysis earlier this year. “I thank the members of both boards for their service to the city and to our retirees. Still, the poor performance of the plans’ investment over the last three years, by any measure—whether compared to peer public pension plans, to policy benchmarks, or most importantly, to the board’s own actuarial assumptions for rates of return—have substantially added to both plans’ unfunded liabilities and the general fund’s burdens.”

More from the San Jose City Council agenda for November 28, 2017: