James Gonzales spent the first decade of his career as a San Jose police officer in the closet. When he was ready, he came out gradually.

He told his family first. Then, his colleagues and supervisors. In 2008, he came out to the broader public on live TV while protesting against Prop. 8, a ballot measure that would have outlawed same-sex marriage in California.

“You reach a breaking point,” Officer Gonzales said of his decision to openly embrace his sexual orientation. “You become exhausted with trying to hide who you are. I wanted to live a full life. I had the confidence that if I did come out, that people would support me.”

He was right. People welcomed him in both his personal and professional life. The veteran officer is now SJPD’s designated LGBTQ community liaison.

On Friday morning, Gonzales reflected on that journey as he watched the San Jose Police Department—an agency that supported him as an individual—affirm its embrace of the LGBTQ community as a whole by becoming the first major law enforcement agency in the US to raise the rainbow flag. Chief Eddie Garcia called the moment historic for the law enforcement profession and the nation.

“This is long overdue,” Garcia said the flag-raising ceremony outside SJPD’s Mission Street headquarters. “Flying this flag shows that we stand with our LGBTQ community members and members of this police department that are part of the LGBTQ family. This simple act is just as important as all the efforts we have done.”

The show of acceptance comes after a series of progressive policies adopted in recent years to change the way the city polices the queer and trans community and welcomes non-straight people within its own ranks.

In 2016, the city stopped targeted enforcement of lewd conduct laws on gay men outside public restrooms. The following year, the department launched an advertising campaign to recruit officers from the LGBTQ community, making it the first police department in America to show same-sex couples in hiring ads.

Though the results of the recruitment campaign are tough to track in terms of real numbers—federal law prohibits employers from asking questions about anyone’s sexual orientation—the impact of the messaging has anecdotally resonated within the department and the public it’s sworn to protect.

Just last week, SJPD launched the “SAFE PLACE” program to curb hate crimes, partnering with local businesses to encourage people to report suspected hate crimes. After all, hate incidents are widely thought to be under-reported because so many minority groups affected by the crimes are afraid to turn to police for help. 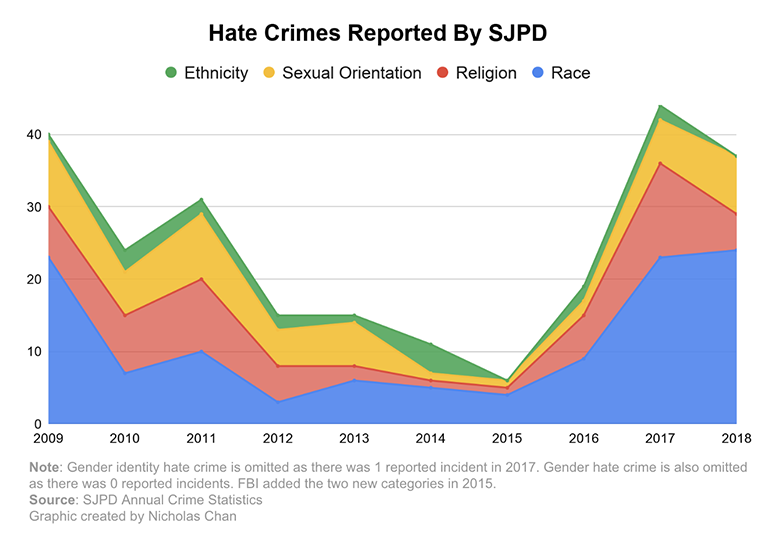 The hate crime reporting program launched here in San Jose is modeled after a similar initiative by the Seattle Police Department, which in 2015 became the first in the nation to implement such a campaign. Though originally designed to prevent hate crimes against gay and trans people, the program has since expanded to address those that target other populations disproportionately targeted by discriminatory acts.

As of now, 62 Starbucks cafes and 25 Wells Fargo branches have posted decals with the “Safe Place” symbol to indicate that they’ve joined SJPD’s hate crime-reporting program. “If you’re walking down the street and you see that ‘Safe Place’ hate crime sticker every couple blocks, you will know that people care, the police care and the community cares,” Gonzales said. “It’s going to give you the confidence to report.” 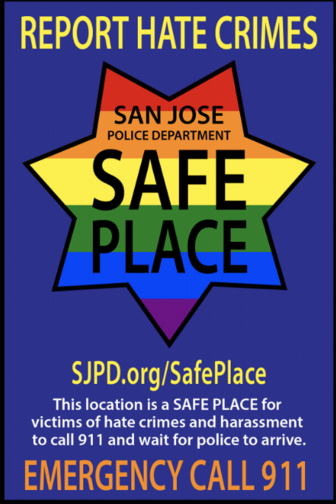 Businesses throughout the city will advertise their participation in the ‘Safe Place’ program by posting decals with this symbol on their storefront.

In addition to the “SJPD Safe Place” decals affixed to storefronts, the agency will provide training materials for employees, with guidelines about calling 9-1-1 when someone reports a hate crime, and allowing the victim to stay inside until police arrive.

“The fact that we are partnering with other corporations sends a message to everyone: the city and the residents are not going to tolerate hate,” Garcia told San Jose Inside in a brief on-the-spot interview at Friday’s ceremony. “It’s important for us because we have seen hate crimes on the rise.”

But Garcia said one should interpret the trend with nuance: there are many reasons for the uptick in reported hate crimes, including more frequent and detailed reporting. “In 2017, we expanded our policies to ask if the victims of a crime felt that bias played a part—that may have increased the numbers.” he suggested.

Hopefully, the chief continued, the increased reporting stems from a growing trust in police to address hate crimes.

At the same time, Garcia acknowledged, “there may be more hate crimes occurring as well. It’s a conflux of all those factors.”

“Unfortunately, LGBTQ individuals are often the victims,” Rosen said. “While the numbers have risen somewhat in our county, they are still pretty low. All in all, it’s a diverse country and people are pretty respectful of one another.”

As though to affirm that point, the rainbow flag now flies outside the police station of the 10th largest city in the nation. It’s symbolic, of course. But for Gonzales, who works within the ranks on actively building relationships with San Jose’s LGBTQ community, it’s a sign that a more progressive era of policing has come. 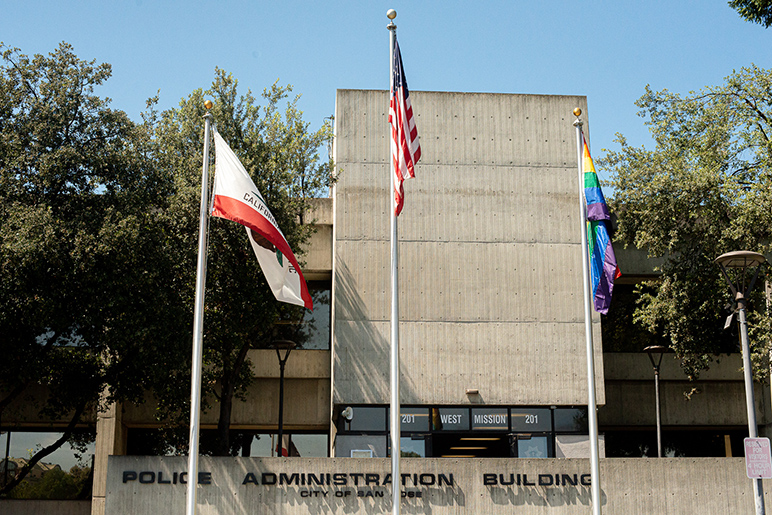 Officials say SJPD has become the first major-city police agency in the nation to fly the pride flag. (Photo by Nicholas Chan)