In his annual state of the downtown address, held Oct. 11, Knies espoused pointed opinions on equity, a strong mayor system and a ballot initiative that aims to align San Jose’s mayoral contests with presidential election years. All three topics have been part of ongoing debates in recent months among city leaders.

But Knies’ words about how five San Jose City Council members invoked the “issue of race” on a number of recent votes prompted outrage from at least two council members: Sergio Jimenez and Raul Peralez.

Jimenez expressed frustration to San Jose Inside immediately after the speech, saying Knies’ opinions came from a place of privilege. A few days later, Peralez, who represents Downtown San Jose, wrote Knies a letter saying he was “disappointed” and “personally offended” by the remarks. “Scott’s words were not only insensitive but they were offensive to me and my council colleagues,” Peralez wrote. “Adding insult to injury, the message was also false and misleading.”

“Scott was personally on sabbatical and not present at the controversial votes referenced,” he added. “Upon return, Scott and I met and he asked me about those contentious votes, but surprisingly he chose not to share the context I provided. I explained the history behind them and how neither were attempting to divide the council along racial lines (Vice Mayor Chappie Jones and council member Lan Diep stand as examples), but rather they were rooted in the socioeconomic inequities and historical racism that undeniably played a part in shaping San Jose’s history.” 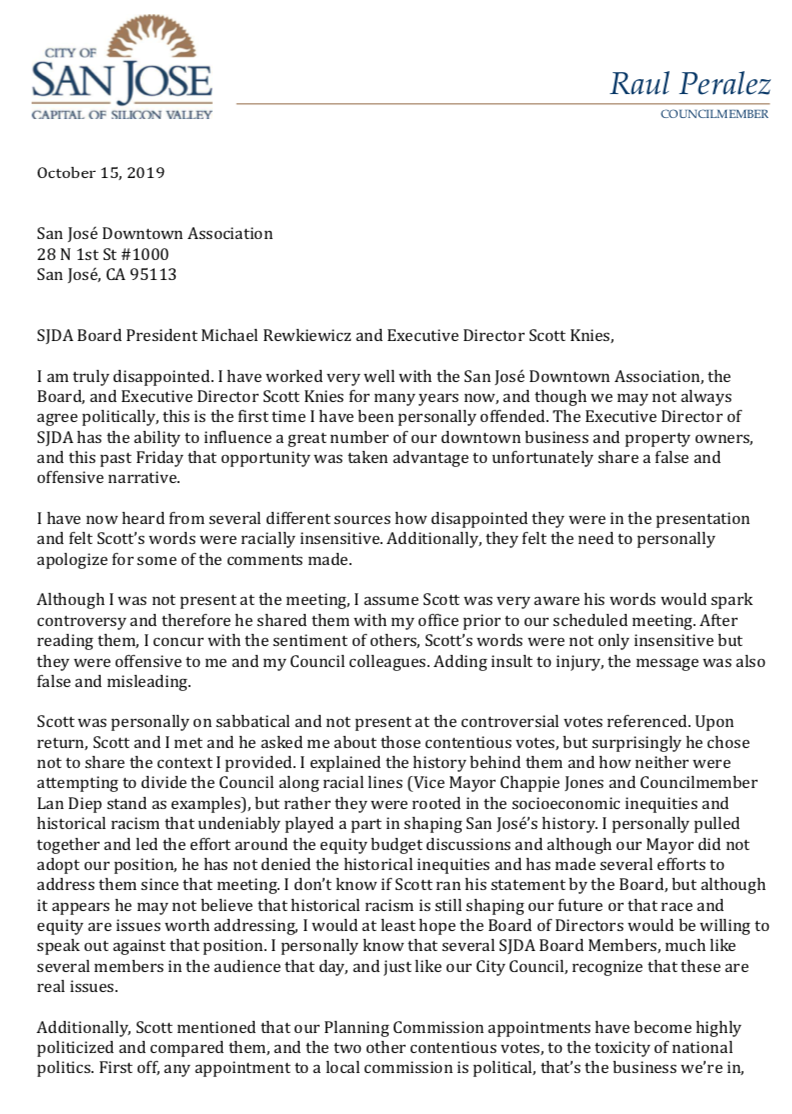 Peralez continued his letter by criticizing the executive director’s take on recent Planning Commission appointments. Peralez and a number of his council colleagues on all political sides agreed that the commission needed to be reformed to be more representative of San Jose. Before the recent appointments, a majority of the commissioners resided in District 6—one of the more affluent areas of the city—leaving parts of San Jose, particularly the East Side, without representation on the city’s most influential commission.

“Yes, our council debated this issue, and yes five council members who share the same values and ethnic background came up on the losing side trying to change this during one appointment vote,” Peralez wrote. “Subsequently, our mayor and council colleagues agreed we did need to change the process and we are doing so now.”

“So to bring these up as if they were issues of ‘tribalism’ meant to ‘divide us’ and to say that somehow this kind of progress has ‘never been the San Jose way,’ demonstrates how out of touch Scott is with social progress and especially with San Jose’s needs,” he added.

The D3 rep also asked for an apology from Knies and/or the Downtown Association’s board, and extended an offer to attend the council’s equity study session in December. 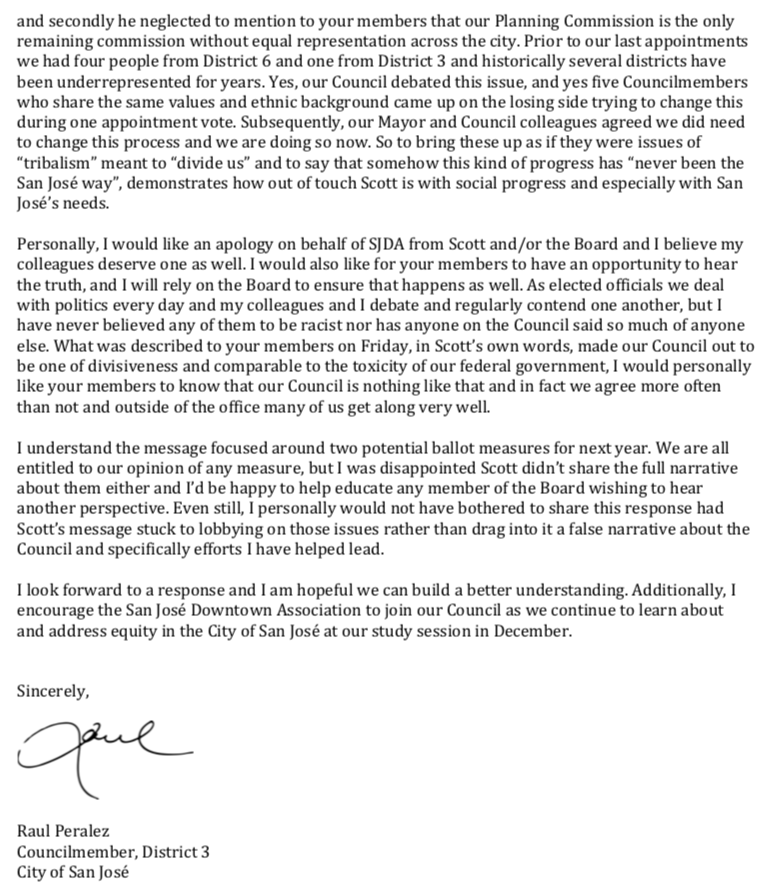 San Jose Inside/Metro publisher owner Dan Pulcrano, an SJDA founder who serves on the group’s board, chimed in with an email saying Peralez was “playing the race card.” Peralez disputed the notion.

A day later, Knies complied with Peralez’s request by issuing an apology.

“As I reflect on my intentions, I realize I also did not fully convey how we don’t want to be what we see on the federal level, especially when it comes to their win-at-any-cost approach,” Knies wrote. “None of use want that to become the San Jose way.”

“I love my city and know you do, too,” he continued. “My main message is not that far apart from the council, the activists or labor: none of us think San Jose is reaching its potential and we want to shake things up and make changes for the better.”

Knies also accepted Peralez’s offer to attend the December equity study session, saying that, “the increase in diversity, equity and inclusion roles for private and non-profit businesses is an overdue need and we embrace the understanding it brings to improve organizational functions, address ethnic justice and frame how we talk to people.” 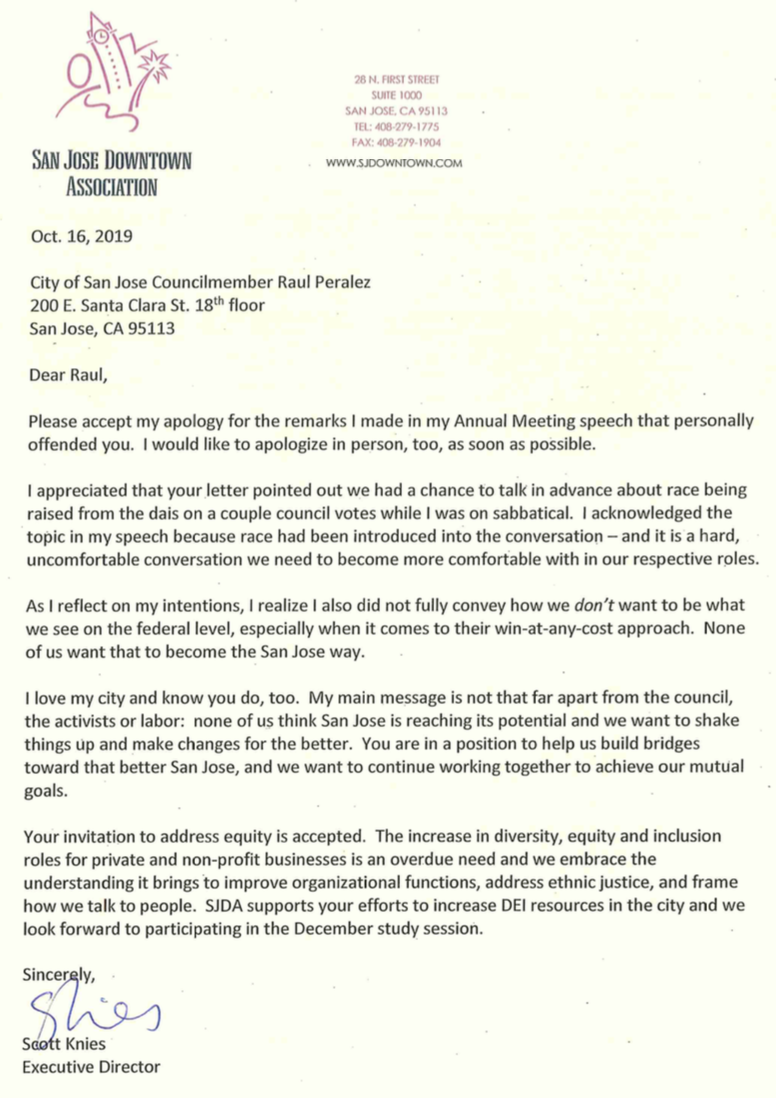