It’s official. Jenny Higgins Bradanini is back on the campaign trail.

The Bay Area Women’s March president, who’s running for San Jose Councilman Johnny Khamis’ open District 10 seat, suspended her campaign last month after she struck and killed a pedestrian with her SUV in Los Gatos. But on Tuesday night, in an email addressed “Campaign Update,” Higgins Bradanini confirmed that she was moving forward with her political bid with “a heavy heart and reflection.”

“San Jose is in a time of change where the decisions made at City Council will shape the future of Silicon Valley,” Higgins Bradanini wrote. “Many residents are thriving, many more are being left behind and we are all worried about the sustainability of our days ahead. … I would be honored to be the voice who makes our neighborhoods heard at City Hall. I will work toward real solutions to the issues that are important to us all.” 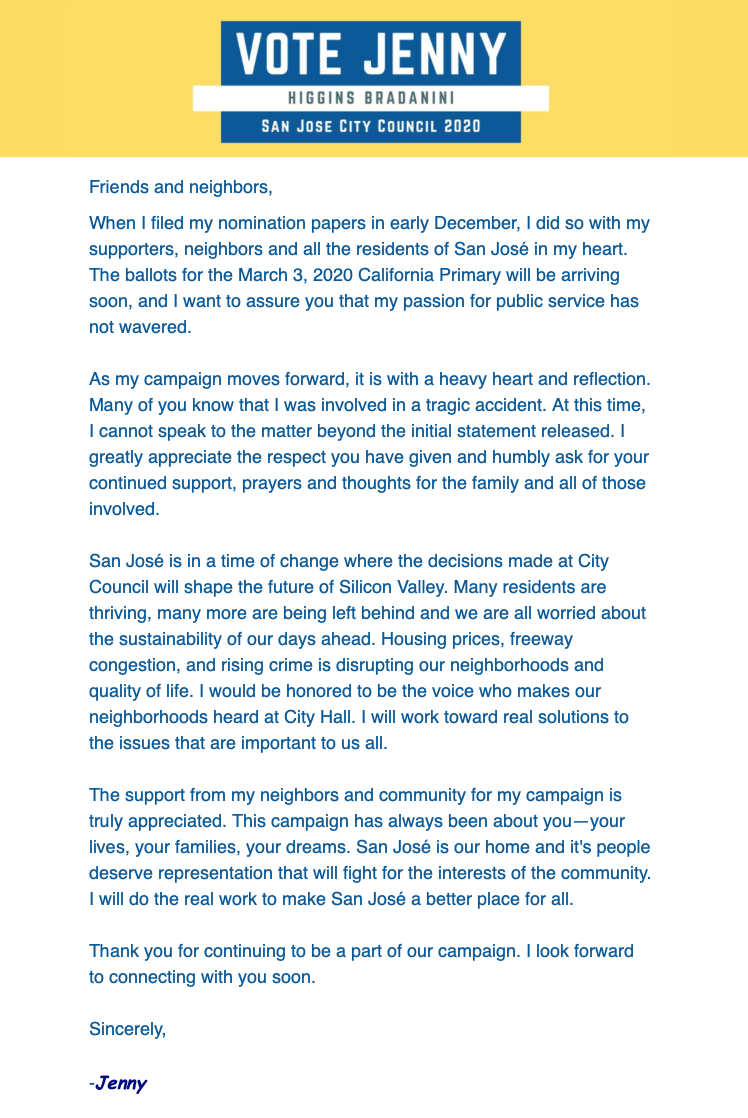 On Dec. 16, the D10 hopeful was driving down the 900 block of Blossom Hill Road by an elementary school when she fatally struck 66-year-old Santa Cruz resident Timothy Starkey.

The victim in the crash had reportedly gone over to a friend’s house to hang Christmas lights and was retrieving something out of his parked car when the collision occurred, friends said. Los Gatos-Monte Sereno police have yet to give the public an update on the investigation.

Higgins Bradanini also addressed Starkey’s death in her recent email, thanking her family and friends for their support and saying she’d be unable to offer any details beyond her original statement.

Over the last few weeks, Higgins Bradanini has been spotted at a number of public events including local debates and the South Bay Labor Council’s primary election canvassing kickoff. The sightings drummed up speculation that she was back on the campaign trail, however, neither Higgins Bradanini nor her political consultant made any public indication about whether she’d resume her bid for the Almaden Valley seat.