Since launching a campaign in 2015 to end homelessness among veterans, Santa Clara County’s multi-agency All the Way Home campaign has placed 1,237 ex-military men and women in stable housing.

The original goal was to house the South Bay’s entire population of homeless veterans, which amounted to about 700 three years ago—one of the highest rates of veteran homelessness in the nation. Despite the program placing 15 to 36 veterans a month, the region’s persistently exorbitant home prices have led to a significant inflow of newly unsheltered veterans.

As of the latest tally, some 660 unhoused veterans live in this county, according to Destination: Home, the nonprofit leading the campaign along with the county, the local Housing Authority and the city of San Jose. Only this year did the program begin housing veterans at a higher rate than that of veterans entering homelessness.

San Jose Mayor Sam Liccardo joined county Supervisor Dave Cortese and Destination: Home officials on Sunday to unveil the latest progress report in time for Veterans Day and to announce plans to continue the program for another two years. 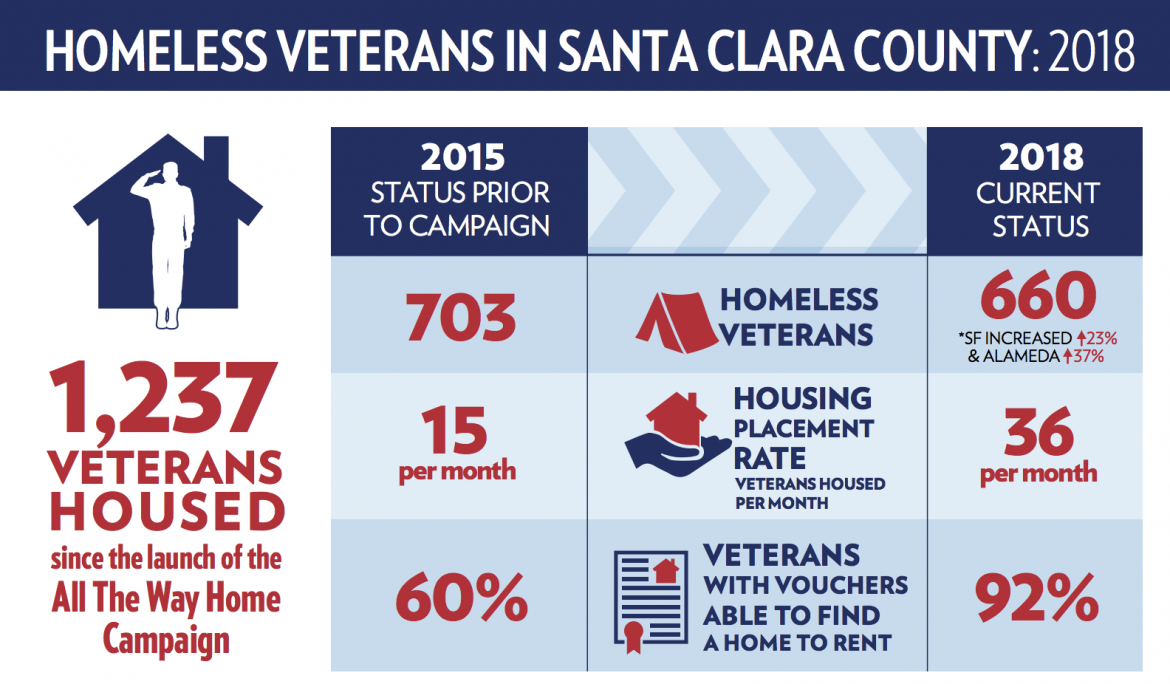 All the Way Home—which is led by Maya Esparza, who’s on track to unseat San Jose Councilman Tam Nguyen in District 7—works by matching landlords with veterans who qualify for housing subsidies. Former First Lady Michelle Obama inspired the campaign through her Mayors Challenge to End Veteran Homelessness led by the U.S. Department of Veteran Affairs (VA) and the Department of Housing and Urban Development (HUD).

“The success of All The Way Home so far has been a testament to community collaboration,” Esparza told San Jose Inside on Monday. “Now that we've seen a reduction of veterans becoming homeless, we can focus on getting even more veterans housed over the next two years.”

HUD’s rental vouchers have been a critical tool for the All the Way Home campaign, according to the new report. This year, the federal agency allocated an additional 140 vouchers for veterans in the South Bay, in part because of the county’s success with finding landlords to accept them by offering financial incentives.

The monetary benefits  known as “gratitude payments” came under scrutiny in 2017 after the Mercury News reported on an unscrupulous landlord—Peggy DeMaio and her family—cashing in on them by evicting one low-income veteran to house another with a subsidy and a bonus payment through All the Way Home. But the city cracked down on the practice that year by prohibiting owners of rent-controlled apartments from charging market-rate rents to veterans with housing vouchers.

When All the Way Home launched, the county Board of Supervisors authorized an additional $1.5 million in annual housing and services for homeless veterans and upped its commitment to landlord incentives by $1.16 million for the duration of the campaign. The board has since made landlord incentives a permanent resource and increased ongoing funding for supportive housing for homeless veterans by $1.8 million a year.

San Jose’s City Council, for its part, has allocated $4 million to help landlords renovate their properties in exchange for housing homeless veterans. The city is also exploring the idea of allocating another $1 million for a veteran housing subsidy with the county, which is slated to come before the council before the end of the year. Meanwhile, the Housing Authority of the County of Santa Clara has close to $7.5 million on hand for VA vouchers.

Local officials this week will also celebrate the grand opening of the Vermont House in San Jose, which will house 16 formerly homeless veterans thanks in part to a $3 million grant from the city to rehabilitate the homes.

“We’re showing that we can make an impact when we set collective goals,” Destination: Home Executive Director Jennifer Loving said in a news release sent to reporters over the weekend. “And while the unfortunate reality is that we will continue to have veterans entering into homelessness, we will achieve our goal of ensuring that veteran homelessness is rare, brief and non-recurring.”