UPDATE, Oct. 26, 2015: By 5pm Friday, the number of cases reported shigella cases reached 182. Of those, 144 live in Santa Clara County and 38 in other counties. Almost all of them ate at Marisco’s on Oct. 16 and 17, but some caught the infection from coming into contact with a person who ate there. Health officials are continuing to collect data on the outbreak and caution that the disease is highly contagious.

Public health officials have tallied 110 people who have been sickened by a bacterial infection from eating at a San Jose seafood restaurant.

Of those, 92 live in Santa Clara County. All suffered diarrhea, fever and abdominal pain after dining at Mariscos San Juan Restaurant No. 3 on North Fourth Street over the past week, according to the county’s Department of Public Health.

Several of those patrons wound up in the hospital and a dozen in intensive care treatment, though that number is expected to grow as local hospitals receive reports of new cases. By Thursday, doctors reported several cases in San Mateo, Alameda and Santa Cruz counties.

Of the 110 cases connected to the restaurant outbreak, 24 have been lab-confirmed to be shigellosis, a diarrheal disease spread through contact with stool of an infected person. Caused by a type of bacteria called shigella, the illness can be fatal and is very contagious. It usually lasts up to a week, but it may take months before symptoms of vomiting and diarrhea subside.

Health officials shut down Marisco’s on Sunday after initial reports of an outbreak began trickling in from people who ate there the prior two days. Inspectors believe, but have yet to confirm, that an infected food handler spread the disease. Lab results from all food handlers aren’t expected until next week, county officials said.

“Our top priority is to protect the public from any further illnesses and to identify the source of the contamination,” said Jim Blamey, director of the Department of Environmental Health. “Our specialists have inspected all cooking and safety processes at the restaurant, and are working with the owner and staff to educate them on safe food handling practices.” 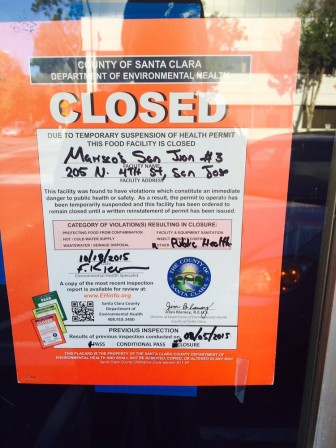 The restaurant will remain closed until health officials conclude their investigation. (Image via Yelp)

“We urge anyone who is ill to seek medical care and to take steps to not spread the infection further,” county Public Health Director Dr. Sara Cody added. “Meticulous hand washing by those who are sick is critical. Our thoughts are with those who are sick as we work to prevent any further illnesses.”

On Wednesday, Independence High School’s dean of student affairs, Greg Meissner, sued the restaurant after coming down with the disease, according to ABC7 news. The lawsuit was filed by William Marler, a Seattle lawyer who specializes in food-borne illness cases, on behalf of Meissner and another patron named Daniel Estrada.

On Thursday, attorney Robert H. Bohn Jr. filed a complaint against Marisco’s for husband-and-wife patrons Martin and Manuela Chavez. More lawsuits are expected. Restaurant owners Sergio Becerra Cruz and Lourdes Garcia Becerra have yet to return a request for comment.

“Unfortunately, I was a victim of this horrific experience that I will never forget,” wrote a reviewer with the handle Moises F. “I went on 10/15/15 and had a plato mixto de pescado y camaron (mixed platter of shrimp and fish). All was well until Sunday at 3:00 am when I awoke with shivers, body ache, diarrhea, stomach ache and a massive head ache. Unfortunately for my luck I was out on vacation at Disneyland. This ruined my trip.”

Yelp posted an “Active Cleanup Alert” on the restaurant’s page noting that because the business recently made headlines, the website would delete comments prompted by media attention and not a customer’s experience. But several of the comments come from people who had patronized the place and became ill. The site shuffled most of those under fold, labeling them “not currently recommended.” 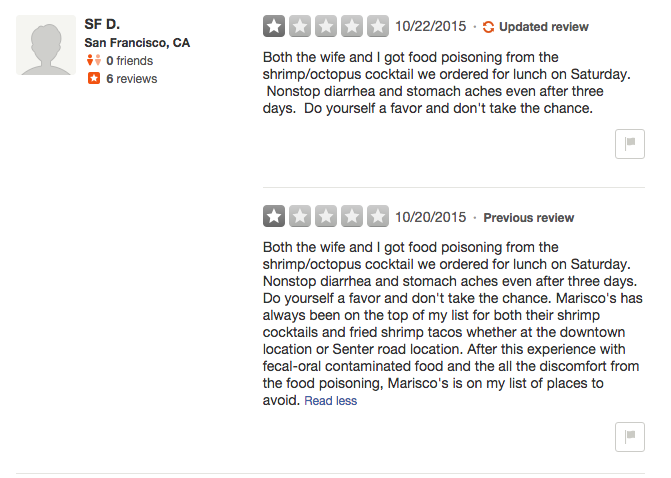 KQED ran a report Thursday about how epidemiologists sometimes rely on Yelp and related apps to track food-borne disease outbreaks. In this case, however, county officials learned of the incident through local doctors.

The county has posted reporting requirements online for doctors, and it expects to release a new tally of patients sometime today.

In 2000, upward of 220 people were sickened by the same bacteria contracted from a Mexican restaurant in Redwood City, according to news reports. That eatery is now closed.

Last year, the county launched an online database and attendant mobile app that lists the inspection reports for every restaurant in its jurisdiction. Here’s a link to the main page, where you can search by name or address. It also includes a list of closures, 18 of which took place this month alone.