For a contest marked by so much scandal and mudslinging leading up to the June primary, the Santa Clara County sheriff’s race seemed oddly quiet lately. But Sheriff Laurie Smith’s challenger, retired Department of Corrections chief John Hirokawa, was apparently scrambling behind the scenes this past week after missing a deadline to get his candidate statement on the fall ballot.

It took two court motions and a whole lot of finger-pointing to remedy the misstep so Hirokawa’s name wouldn’t appear next to a blank box on the election booklets mailed to about 850,000 prospective voters. He pulled it off by simultaneously shifting blame on the county and tapping insiders at the same agency for help, putting one political backer especially in a tough spot.

The amateur move of missing a deadline most other candidates routinely meet is another apparent misstep in a campaign that has cycled through campaign managers and struggled to find its footing since Hirokawa emerged second in a field of five candidates to challenge Smith in the general election—the first contested runoff in two decades. Rather than picking up momentum, however, Hirokawa remained on the defensive over the the involvement of his leading backer and close political ally, Deputy Sheriffs Association President Don Morrissey, in a racist texting scandal. Morrissey resigned as union head on July 26, eight weeks after the primary.

The last day to submit a candidate statement to the Registrar of Voters (ROV) was Aug. 10, but Hirokawa didn’t realize he blew past the deadline until three weeks after the fact, on Aug. 31, according to his initial legal petition.

“I was unaware of this requirement as I never received the candidate booklet from the ROV and due to confusion, neglect or mistake failed to recognize this was a required deadline as set forth in the primary booklet,” he wrote under penalty of perjury, which seems to contradict records showing that he signed for a copy of the guide on March 8. 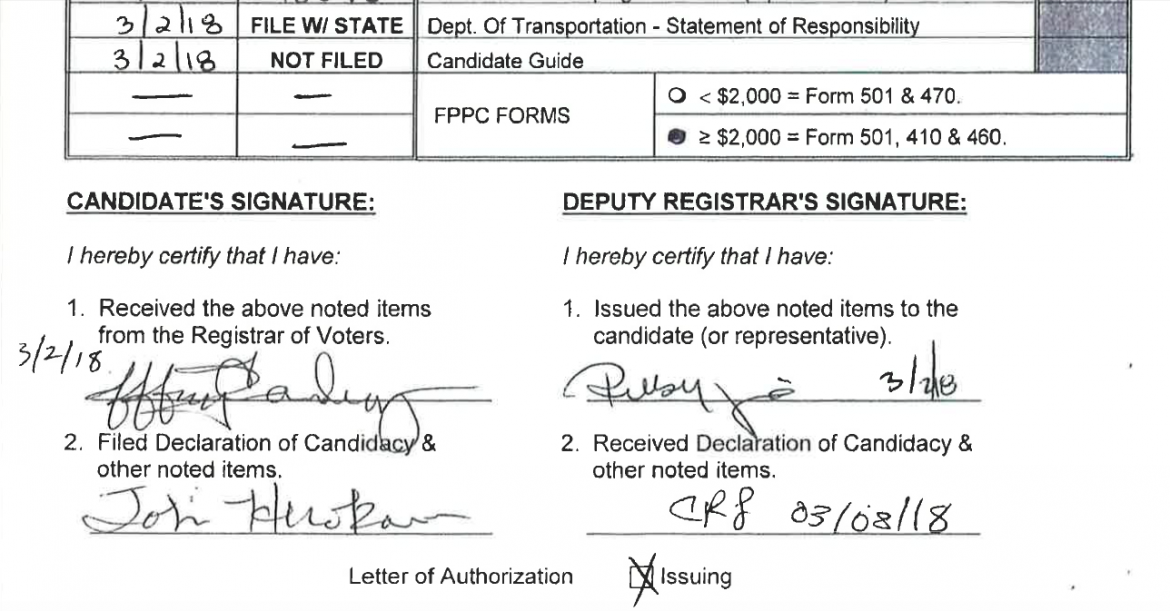 So Hirokawa gave it another shot.

This time, however, he cast his noncompliance as more the county's fault. In a more detailed petition filed Sept. 4—just two days before the ROV sent its voter guides to the printer—the ex-undersheriff said he was “puzzled” by his statement not automatically rolling over to the runoff, blaming the county’s “unclear and confusing” rules and unnamed ROV staff for misinforming him about the process. Though records show that the ROV sent a letter dated July 12 from interim Election Division Coordinator Linda Tulett to remind Hirokawa of the upcoming deadline, he said he never saw it.

Again under penalty of perjury, Hirokawa stated that nothing in the candidate booklet—the one he said he didn’t obtain in time—addresses the issue of repurposing statements filed before the primary. Maybe he skipped the multiple pages in the candidate guide listing important dates to remember, including the Aug. 10 deadline in question.

Four county employees helped Hirokawa salvage the situation, according to court records. On Aug. 31, he spoke to Assistant Registrar of Voters Virginia Bloom, who, in his telling, acknowledged that the rules are confusing and assured him that the county would refrain from opposing his appeal.

Over the next few days, Hirokawa also emailed back and forth with County Counsel deputies Steve Mitra and Danielle Goldstein, telling them about his conversation with Bloom and his intent to challenge the ROV in court. He looped in a third county attorney, Hirokawa campaign donor Cheryl Stevens, on her private email address. 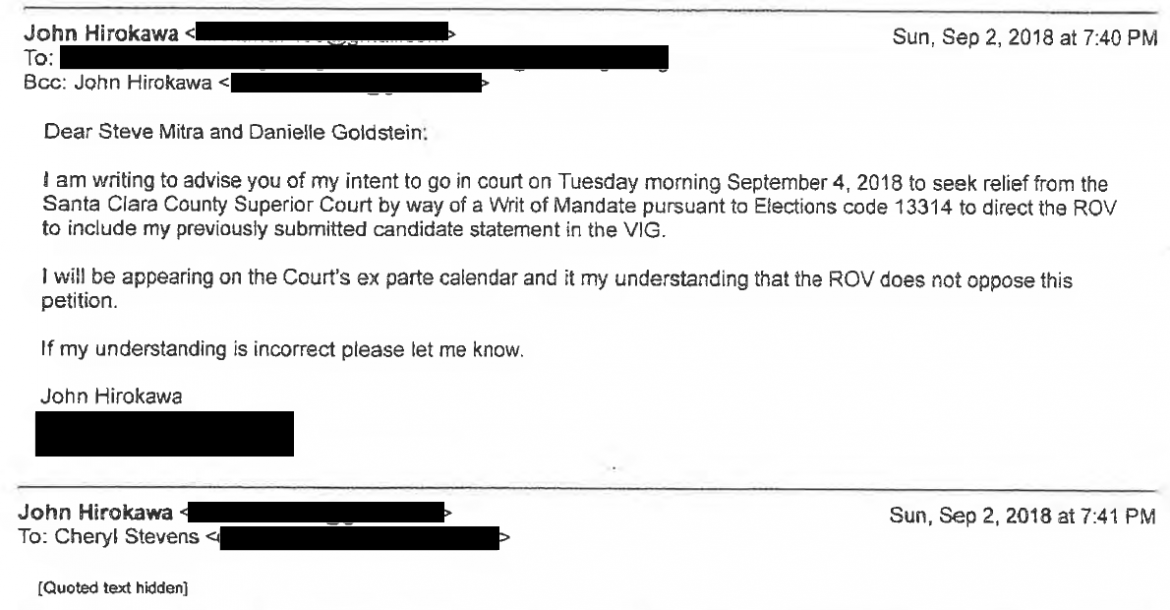 The possible conflict came to light when Hirokawa attached email headers to his court filings and Smith supporters brought the email chain with Stevens to the attention of the Santa Clara County District Attorney’s office. John Chase, head of the DA’s Public Integrity Unit, contacted on Tuesday, refused to confirm or deny whether an investigation was underway into possible conflicts of interest in the counsel’s office.

Stevens was not available at her office telephone number on Tuesday, but the county’s Employee Services Agency described her status as “active.” She didn’t answer multiple emails to her county and personal addresses by press time.

County Counsel Legal and Compliance Officer Kim Forrester said Stevens has been out of the office since Sept. 5. That’s a day after Hirokawa’s ex parte court hearing, when he submitted copies of his email correspondence to the judge.

When reached for comment, Hirokawa directed questions to his new campaign manager, Vincent Rocha—his third in a year after Barry Barnes quit last fall for undisclosed reasons and Jeffrey Cardenas left in July, citing frustrations in a text to San Jose Inside “that people didn’t see Laurie [Smith] for the partisan that she is.”

Cardenas said he’s too busy to elaborate on what he meant, and Hirokawa said in an email sent by Rocha that he wishes him “only the best.” As for the missed deadline fiasco, Hirokawa chalked it up to “simply a bureaucratic error on the ROV’s part.”

“In fact,” he added, “my petition was not opposed in court by the ROV and my candidate statement will be on the November ballot. I am glad the voters will have the chance to base their vote in November with information from both candidates’ statements.”