Santa Clara County Supervisor Dave Cortese has been accused of illegal electioneering as he makes a bid to replace terming-out state Sen. Jim Beall (D-San Jose). But the D3 rep claims that at least one of the allegations against him was fabricated.

Filed on Oct. 14 with the state’s Fair Political Practices Commission (FPPC) by someone named Elaine Jennings, the complaint alleges that Cortese failed to make advertisement disclaimers as outlined in California’s Political Reform Act. Jennings—whom San Jose Inside was unable to reach Monday—says Cortese used his county email and phone number on materials sent out by his campaign. She also alleges that Cortese did not include the required “paid for by” disclosure in his emails.

The email snippet provided to the FPPC is date-stamped on Sept. 23, and announces a new endorsement for Cortese’s state Senate campaign and solicits donations. The email is signed, “You can always call my office at 408-299-5030 or email me at [email protected]” 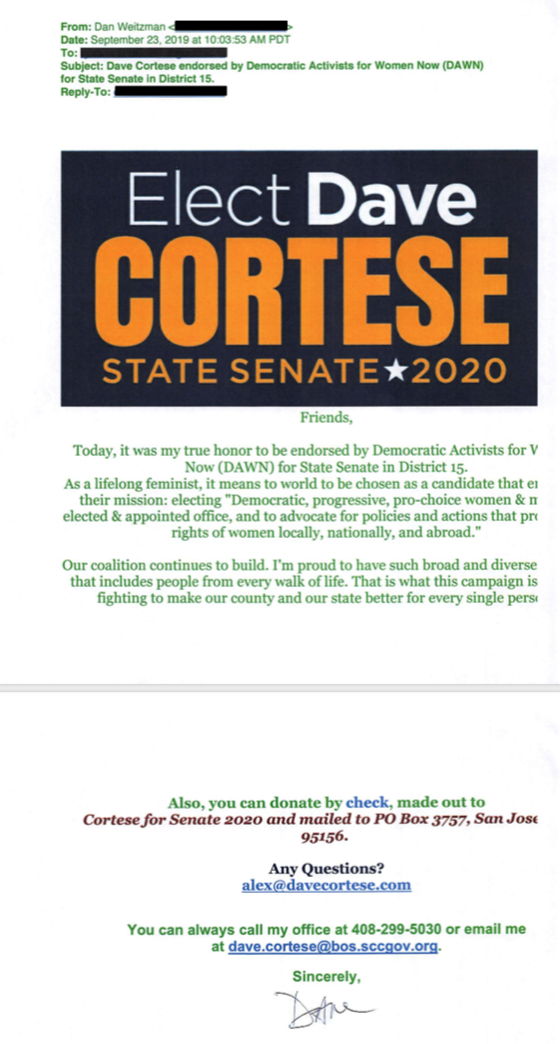 Yet in a phone call Monday, the state Senate hopeful called the accusations “ridiculously false.”

Cortese and his campaign manager Alexander Maykowski say the email Jennings gave the FPPC as an attachment didn’t originate from their office and appears “doctored.” San Jose Inside reviewed a copy of what Cortese claims is the original Sept. 23 email, and while much of the text looked the same, it bore Maykowski’s signature.

The email Jennings submitted with the complaint, on the other hand, was apparently sent by Dan Weitzman—a consultant and controller of the California Democratic Party who could not immediately be reached for comment. But Cortese says Weitzman didn’t send the email.

“I’m not sure it would matter on a campaign email if I let people know how to reach me at the county,” he added. “We don’t mix and match those things.”

Email records show that Weitzman has disseminated Cortese’s campaign correspondence in the past, however. Earlier this summer, an email went out to subscribers of the Capitol Morning Report—a state government-related newsletter—from Weitzman that touted Cortese’s fundraising accomplishments.

The second part of Jennings’ complaint echoes recent criticisms that Cortese has received for handing out county-funded swag during what some people considered campaign appearances. He has also taken flak for dipping into the county budget to sponsor events outside the supervisorial district he represents but within the bounds of State Senate District 15—allegedly in an effort to elevate his political profile.

Jennings makes her case by detailing Cortese’s county-funded sponsorship of the Rose, White and Blue Parade, an annual Fourth of July festivity that winds through Supervisor Susan Ellenberg’s District 4. “In this county funded parade, Cortese rode in a vehicle emblazoned with his campaign banners and had individuals (some of whom may have been county staff members) holding campaign signs,” Jennings wrote.

She goes on to say that Cortese’s staffers “were also handing out tote bags that had the county logo on them and were paid for with county funds.”

According to an expense log for Cortese’s officeholder account obtained through a public-records request, the D3 supervisor spent $17,698 and some change on the canvas totes this past June and another $890.39 for a batch about seven months prior.

But while some have singled out Cortese’s involvement with the Rose, White and Blue parade, he attests that the full county Board of Supervisors endorsed the celebration. According to the board’s June 6 agenda, the county sponsored the parade and used $1,200 from Cortese's D3 office budget to “support outreach activities in promotion of the event and entertainment activities on the day of the parade.”

“It has nothing to do with the campaign,” Cortese says. “It’s just somebody making stuff up, basically. The whole complaint is sort of make-believe.”

Records indicate that the D3 supervisor went on a banner spending spree this summer, as well. His office charged at least $9,000 for promotional signs, some ostensibly for a Day on the Bay event in Alviso, for which he advertised heavily in Supervisor Cindy Chavez’s domain and parts of State Senate District 15—namely Campbell and Los Gatos.