“We are disappointed to learn that SEIU Local 521 has rejected the tentative agreement,” County Executive Jeff Smith said in a statement. “The county is prepared to meet with SEIU in negotiations if the union is prepared to do so.”

The union’s bargaining team met with county officials over the weekend to work out a new deal. It was the first time in more than two decades that a union voted against a proposed contract, according to the county.

“The tentative agreement was a package proposal from the county which required that all bargaining units pass their respective side agreements in order to ratify the entire (agreement),” the union wrote on its website. “One bargaining unit voted ‘no,’ resulting in the entire (deal) being rejected. The negotiating team is meeting this weekend to strategize a path forward that puts our community first. At the present time, we are working without a contract.”

The contract proposed a 4.5 percent raise in the first year and 3 percent raises for the remaining three of the term.

It appears the unit opposed to the deal was the one that represents social workers, who have been appealing to county leaders to restore positions cut over the past several years. While the county restored two-dozen of those jobs in the current-year budget, several of the department’s employees said that isn’t enough to make up for the loss.

There’s also concern that some information was misrepresented to the social services bargaining unit and that affected the outcome of their vote, according to the union.

“Our master negotiating team is committed to ensuring that all members are informed with correct information during ratification votes,” the union wrote in a notice to members. “The negotiating team has found extensive evidence of misrepresentation given primarily to the Social Services Unit membership by sources that have an obligation to correctly inform membership about the tentatively agreed upon package proposal.”

Members took to Facebook to voice their disapproval of the decision to vote against the deal.

Union members debated on the SEIU Local 521 Facebook page about the merits of the contract. Some social service workers said they got the raw end of the deal, while others complained that because of their “no” vote, “9,800 workers are without a contract for a few hundred.”

“No one is discrediting the hard work and efforts of our negotiators,” wrote a commenter named Eric Lopez. “I’m glad everyone but [social services] got a good deal. So what I’m understanding is (eligibility workers) eat it, continue to work under unmanageable conditions, oh well because everyone else is getting a fair deal? That’s great you’re offered overtime while we drown in our cases with no (overtime) no relief. We’ve been kicking and screaming for help and people say this isn’t the forum to fight for what’s fair to us as workers and to the clients we serve? Do we not also matter to the rest of our members? Have you spoken to a worker and listened to what exactly our concerns are?”

The union called for a re-vote of the social services agreement on July 22, with time and place to be announced. 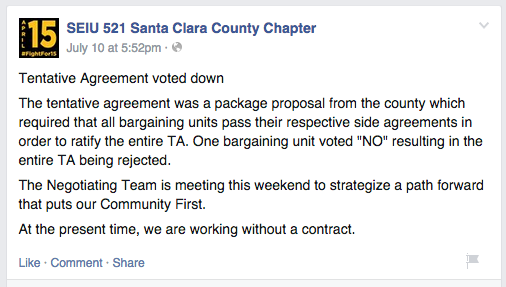