Update, 1am: In the notoriously troubled Alum Rock Union Elementary School District, 20-year trustee Esau Herrera appeared headed for defeat. But, surprisingly, his political ally, the outspokenly inflammatory Khanh Tran—who’s the subject of a restraining order that prevents him from even attending meetings where the superintendent is also present—was on track to keep his spot on the five-member board.

Andres Quintero, who generally votes against Tran, secured the most votes by early Wednesday, putting him well ahead of Tran, who himself pulled just a couple-hundred votes ahead of third-place contender Linda Chavez.

Update, 12am: In the San Jose council races, incumbent Tam Nguyen edged ahead of second-time challenger Maya Esparza by 10 percentage points in District 7.

In District 9, where Don Rocha terms out at the end of the year, it appears that San Jose Unified trustee and decades-long real estate broker Pam Foley will succeed him. With 77 percent of precincts reporting in the wee hours of Wednesday morning, Foley beat Campbell Union High School District trustee Kalen Gallagher by a 7-percent margin.

Update, 8pm: Broadcasts of MSNBC and CNN played on two projectors at the Orchard City indivisible shindig in Campbell. The room erupts in applause when both channels announced that the Dems were on track to win control of the House, and with “boos” when the returns showed Beto O’Rourke trailing Sen. Ted Cruz in Texas. 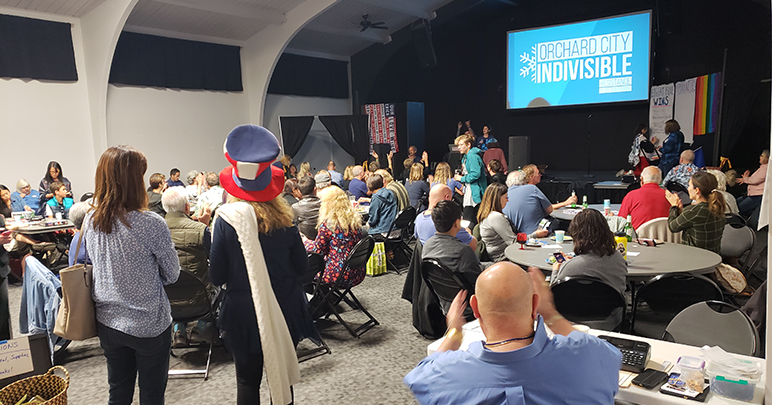 Orchard City "snowflakes" met at a local church to watch the returns.

Update, 5pm: Santa Clara County election officials say 600 people submitted conditional voter registration forms Monday. About twice as many are expected today, ROV spokesman Eric Kurhi said. By comparison, the county had 432 conditional registrations before the June primary. Conditional registration, which allows people to register beyond the October deadline, has only been an option since Jan. 1, 2017.

The conditional registrations are one of many numbers trending up this election—both here and throughout the U.S. One of the latest national early voting tallies set the number at a staggering 40 million with a record number of youth voters and people of color. That’s 4 million higher than the previous, already record-smashing estimate.

Melinda Jackson, who chairs San Jose State’s Political Science Department and studies the intersection of politics and identity, said Trump’s presidency has been so unprecedented that the midterms are bound to be, too.

“This president has been pursuing an unusual political strategy, which is to just focus on the base,” she said. “He’s not a typical Republican in that with Trump, it’s Trump who always comes first. He’s focusing on the people who already really like or support him, but that doesn’t reflect the whole Republican party. So, how that strategy pays off for him will be interesting to see.”

In largely Democratic regions like the South Bay, of course, it’s bound to motivate more people to vote against everything he represents.

“A lot of people in places like this are feeling personally attacked,” Jackson said. “They’re feeling threatened. Having a high Democratic turnout means they can potentially take back control of the House, although the Senate is more of a long-shot. It could also mean that a lot of voters want to send a message to Trump, that they don’t like his rhetoric, they don’t like what he represents and they’re fighting back.”

Jackson says she expects that a lot of young voters will turn out to the polls today for that reason, which would translate to a significant demographic change in the electorate.

“In midterms, you tend to have an older, higher-income voters, but right now we have more engagement from young people than we’ve seen in at least a generation,” Jackson said. “And that’s really significant when we have four props on the ballot dealing with housing issues, especially Prop. 5 and Prop. 10, which would give cities more authority over rent control. These are issues where that older demographic are going to have completely divergent interests.”

National politics and cultural shifts will no doubt sway our local elections, too, Jackson noted. The #MeToo movement culminated in a what’s being widely hailed as the “Year of the Woman.” Naturally, she said, that bodes well for female candidates such as Susan Ellenberg in the District 4 supervisorial race against Don Rocha and Sheriff Laurie Smith in her re-election battle against retired Undersheriff John Hirokawa.

“I really don’t know with the sheriff’s race,” Jackson said. “I mean, I wouldn’t be surprised either way. Laurie Smith is a woman, so she might stand to benefit from that, but there have been a lot of ethical questions raised about her.”

In races between two Democrats, like the one for county supervisor, it often comes down to the identity of the candidates, Jackson explained.

“That’s especially true if the voters don’t know enough about them,” she said. “Then they may end up voting based on group identities, thinking, ‘Well, I’d like to see more women elected,’ or, ‘It would be great to elect a Latino,’ or a young candidate and so on.”

Original article, 11am Nov. 6: About 887,000 Santa Clara County residents have signed up to vote in this year’s midterm election. Local officials say that’s the largest-ever pool of registered voters in this jurisdiction, surpassing that of even the 2016 presidential contest, and reflects unprecedented statewide numbers.

A record 19.7 million Californians registered to vote in today’s election—1.9 million more than in 2014, according to the Secretary of State. Early voting has been trending up, too.

As of Monday, some 257,497 vote-by-mail ballots had made their way to the Santa Clara County Registrar of Voters (ROV)—a midterm election record. Statewide, about 3.7 million Californians mailed theirs in by Sunday, according to Political Data Inc. Nationally, the early vote totals of 36 million this morning fall short of those in the 2016 presidential race, when more than 46 million early votes were counted by this time.

Still, massive early voting numbers point to high voter participation as officials from both major parties cast the midterms as an inflection point that will determine the course of the nation under a divisive President Trump. In this county, turnout is expected to land somewhere between 60 and 70 percent, according to ROV spokesman Eric Kurhi.

The polls close at 8 tonight. Eligible residents who forgot to sign up to vote by the Oct. 22 deadline can still apply for conditional registration.

If you need a way to get to the polls, the Santa Clara County Democratic Party is offering free rides (just call 408.445.9500 for more info), as are Uber, Lyft and Ford GoBike.

Results of the vote-by-mail ballots submitted to the ROV early will be posted online after the closing gun. A few more rounds of vote tallies are expected to go live tonight, but expect the counting to continue round-the-clock for several more days at least.

San Jose Inside/Metro Silicon Valley will be making the rounds at some election watch parties (some of which we listed below), so look for our roundup of the evening in Wednesday’s print issue. Check out our Twitter feed @SanJoseInside for updates.