Santa Clara County saw a sharp increase in the number of domestic violence-related deaths from 2014 to the next year, according to data released last week. But the 13 killings in 2015 were more in line with the region’s 21-year average.

In one case last year, an elderly man terminally ill with cancer shot his wife in the head the week before Christmas before turning the gun on himself. The man left several typewritten letters to police explaining that he took their lives because he worried that nobody would be able to care for his Alzheimer’s-stricken wife after his own death. He thought it best, he wrote, that they “go together.”

Assistant District Attorney Cindy Seeley Hendrickson, who authored the review, said she expects many similar tragedies unfold. As the elderly population grows, she said, the healthcare system will have to deal with more terminal illness, dementia and later-in-life mental health issues.

“We’ have to figure out how we can intervene in those situations,” Hendrickson told San Jose Inside. “Some of those folks are isolated and they’re not doing anything that would catch anyone’s attention. So the best way to address that would be to have their doctors watch for warning signs. Healthcare providers may be their only contact, especially if the couple has no children.”

Of the 13 deaths last year, eight people were victims and five were perpetrators who died by suicide or suicide-by-cop, according to the report. One of those deaths was San Jose police Officer Michael Johnson, who was killed while responding to a domestic violence call. The year prior, in 2014, the county saw only two domestic violence-related deaths—an anomalous low.

The publication underscores the continued problem of underreporting prior abuse. In 80 percent of the relationships cited in the review, friends and family witnessed abuse. But past violence was reported only half the time and none of the victims had a restraining order against their killers.

Hendrickson said the county Domestic Violence Death Review Team, the group that puts out the annual report and meets several times a year to discuss prevention measures, has spent a lot of time looking at predictors of fatal violence. Two of the biggest precursors to lethal domestic violence, she said, are controlling behavior and unemployment.

“People who have nothing to lose are more prone to violence,” she said. “Another red flag to watch for is controlling behavior, which should be concerning to everybody.”

Another common denominator, which reflects national trends, is gender. Every single perpetrator in this county last year was male. Their average age was mid-to-late 30s. As in years past, domestic violence spanned the socioeconomic spectrum, affecting the wealthy, the impoverished and anyone in between.

Last year, 4,286 domestic violence cases were referred to the District Attorney’s Office. Some 757 resulted in felony charges, 1,929 in misdemeanors and 1,660 in no criminal complaints filed.

A challenge moving forward, Hendrickson said, is figuring out how to better track precursors to deadly violence. For the past two years, police and other first responders have used a “lethality assessment” questionnaire to identify cases likely to turn fatal.

“That tool makes us wiser about how we handle cases,” Hendrickson said. “It affects how high the bail will be and how much counseling a person gets. That’s why we want to make that available to decision makers every step of the way.” 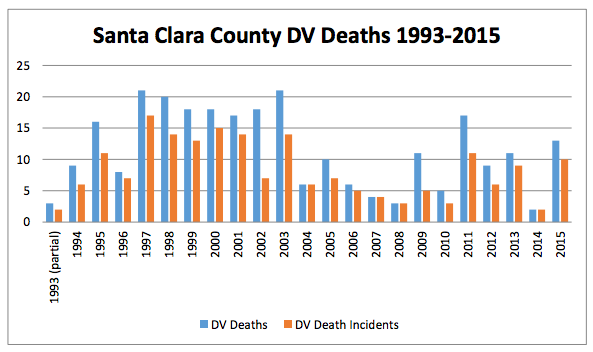