When it comes time to pay up, the South Bay’s biggest commercial denizens go up against one of three county boards to try to prove that the building land, lab equipment and machinery they use to become multinational behemoths are worth far less than the taxman says. In 2018, $81.9 billion of the county’s $483 billion assessment roll got tied up in disputes, which at a 1 percent tax rate amounts to $819 million in refunds at the expense of schools, roads and all kinds of public services.

Apple alone has appealed $10.4 billion in attempts to shrink its tax bills. That doesn’t even include appeals over the new “Spaceship HQ,” which will no doubt transpire in the years ahead. Applied Materials has appealed $6.1 billion, Hitachi $5.9 billion and Google $3 billion. Other especially contentious appellants include the SF 49ers at Levi’s Stadium, Pacific Gas & Electric, Lockheed Martin, Intel and Westfield Malls.

It’s a high-stakes game, one with a huge power disparity between nominally paid public servants and companies with vast resources. That makes the routine task of appointing people to the county’s 70-plus commissions extraordinarily consequential when it comes to the tax boards, which issue valuation rulings that can’t be appealed in court.

Though the Board of Supervisors ultimately decides who to assign, Larry Stone has spent his 24 years as county assessor quietly shaping the appellate bodies by recommending nominees who exceed the minimum eligibility requirements. Mostly, supervisors heed his advice, appointing people who meet Stone’s desired trifecta of experience in real estate law, business valuations and the highest appraisal credentialing. 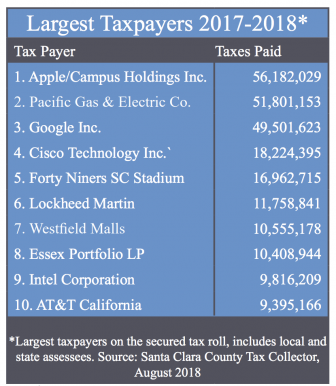 “Too much hangs in the balance,” said Stone, a soon-to-be-seven-term assessor who’s served a combined 48 years in elected office. “Putting the wrong people on such important boards puts the financial stability of the county at risk.”

If that happens, Stone said, he’ll put up a fight. He raised hell last week when Supervisor Dave Cortese bypassed his preferred candidate, certified commercial property appraiser Chris Carneghi, who holds a master’s in business administration from San Jose State University and has often been called to testify as an expert witness in court. Instead, Cortese chose David Tonna, a well-connected Los Gatos home-seller and past president of the Silicon Valley Association of Realtors with two years of higher education. Stone saw the move as retribution for refusing to fall in line with Cortese’s labor-aligned coalition.

“This was political payback to sanction me for not staying out of that race,” Stone said. He said he’s sure of it because of events leading up to Tonna’s nomination, which was endorsed by one of Supervisor Cortese’s political patrons, South Bay Labor Council Executive Director Ben Field.

To talk politics at the Santa Clara County government center, in Stone’s experience, officials take a meetings in the cafeteria. So when Cortese called him to a table in the ground-floor dining hall last month, it set a transactional tone to the conversation.

In Stone’s telling, Cortese wanted to talk about three things. The race between San Jose Unified trustee Susan Ellenberg and terming-out San Jose Councilman Don Rocha to succeed Supervisor Ken Yeager as he closes out his final year on the county board. Cortese’s 2020 run for state Senate. And a pending appointment to an assessment appeals board—a key position with power over tens of billions of dollars in commercial tax disputes against some of the most powerful companies in the world.

“He asks me about Carneghi,” Stone recounted, “and I said he’s highly recommended, he’s exactly what we need. Then he segues into the race between Rocha and Ellenberg, and says, ‘It would be really nice if you endorsed Rocha, but it you don’t, it would be really nice if you stayed out of it.’ He was basically trying to shake me down, trying to put pressure on me to stay out of a political race by dangling this vote for Carneghi.”

After meeting with both candidates, Stone chose to endorse Ellenberg, who ultimately won the election despite powerful labor interests spending more than $500,000 to defeat her. “I called Don and told him what I was going to do,” Stone said. “I said, ‘My wife and I are going to give Susan a check.’ Don was very cordial, he said no hard feelings, it’s fine. He was much more civil than Dave.”

According to Stone, Cortese punished him for going against his wishes. At the Nov. 20 Board of Supervisors meeting, Cortese appointed Tonna and went so far as to cast suspicion on Stone for voicing such strong opinions about the nomination.

“I think there’s a problem there,” Cortese said. “I think something’s rotten in Denmark.” He hinted at some kind of fox-guarding-the-henhouse impropriety, saying he plans to investigate further, and then proceeded to bungle a line from the same play: “To quote Shakespeare, ‘Thou protest-eth too loudly,’ and I don’t know what’s behind that or why.”

Cortese declined requests for an interview. Through a spokeswoman, he referred back to his remarks from the dais. Stone, for his part, was outraged. In his view, Cortese’s action throws a critical committee dangerously off kilter. Now, two of its three members have residential real estate experience but nothing in the way of commercial appraisal expertise, even though about 95 percent of the appeals coming before them involve business appeals over the value of all kinds of specialized property, from commercial aircraft to cleanroom machinery, robots and server farms.

“This gentleman doesn’t have the qualifications to be hired in our office as an auditor-appraiser [who are responsible for evaluating equipment and machinery],” Deputy Tax Assessor David Ginsborg said of Tonna. “It’s like expecting your primary care physician to perform brain surgery.”

Further angering Stone was the fact that all but Supervisor Mike Wasserman—who abstained from the 4-0 vote last week after disclosing that Tonna may have donated to his uncontested re-election bid—confirmed Cortese’s pick. The last time sparks flew over this kind of political appointment was in 2010 when then-Supervisor George Shirakawa—who wound up jailed on unrelated corruption charges a few years later—nominated real estate broker John Howe against Stone’s fierce objections. Incidentally, Howe was listed as a reference on Tonna’s application alongside Field.

Just before last week’s meeting, Stone sent a strongly worded letter expressing “profound disappointment” that Cortese wasn’t sold on Carneghi. “Mr. Tonna simply does not express the experience to contribute in a meaningful way to make value determinations of such very complex specialized property,” he wrote, noting that he’d be more than happy to have Tonna lend his real estate knowledge to one of the residential appeals boards. “The experience and acumen of potential candidates is even more important in Silicon Valley because of the complexity of our high technology industrial base.”

Following the same board session, Stone sent another stern dispatch to Supervisor Joe Simitian, the board president who also cast his vote for Tonna. “I can’t tell you how disappointed I am in you following your vote to appoint an individual with inferior qualifications and credentials to a position with billions of public dollars at risk,” Stone chided. “Your decision is fiscally irresponsible.”

Simitian defended his decision, saying he got caught in the crossfire between Stone and Cortese. “Essentially, the assessor had been unable to persuade Cortese about Carneghi,” Simitian said. “And for better or for worse, only one person gets to nominate someone.”

Tonna may not have lived up to Stone’s expectations, but he met the bare minimum eligibility threshold. If Silicon Valley’s increasingly sophisticated assessments require expertise above and beyond that, then supervisors would have to enact an ordinance elevating Stone’s desired qualifications into required ones. Otherwise, Simitian said matter-of-factly, there’s no real choice: “It’s thumbs up or thumbs down.”