Jamie Foberg walked into the methadone clinic looking for something more productive to do than anxiously check her phone for signs of life. Her friend had confided in her about wanting to kick a heroin habit, which had already brought her several times to the brink of death. But early last month, her friend suddenly stopped calling.

“I’m really worried,” said Foberg, 31, a local activist and advocate for the homeless. “But that’s also why I’m here: to learn how to save her life, if it comes to that.”

In a small room at the central San Jose addiction clinic, she joined a handful of other attendees to find out how to administer Narcan, the brand name for naloxone, which blocks opioid receptors in the brain to reverse the effects of an overdose.

Dan-Wen Tsai, the clinical nurse leading the training, opened a pink-and-white box and pulled out one of the applicators.

“What you do is use your two fingers like this,” she said, holding up one of the small plastic nozzles. “You insert into the nostril and push.”

Unlike the old naloxone kits, Tsai explained, the new ones are needle-free and easy to use. Up until a year ago, the overdose antidote came in glass ampules that had to be administered injected into a vein or muscle with a one-inch needle.

“Most people aren’t medically trained,” Tsai said, “so they might not be comfortable using a needle. But this is very easy.”

According to the Centers for Disease Control, more than 52,000 Americans died of drug overdoses in 2015, which comes to roughly one person every 10 minutes. That’s the highest count on record. Driving the increase is the soaring abuse of prescription painkillers and heroin, a category of drugs known as opioids. 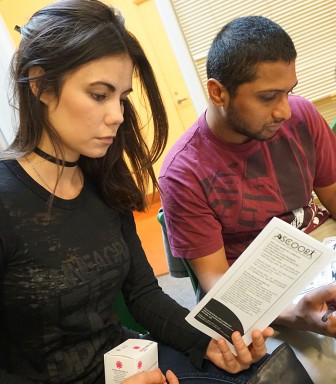 Santa Clara County saw a 126 percent jump in the number of heroin poisonings from 19 in 2011 to 43 in 2015, according to the California Office of Statewide Health Planning and Development. Preliminary data from 2016 show a continued upward trend—and that’s just for heroin.

The county has also seen an uptick in overdoses from other opioids, including fentanyl, which is 50 percent more potent than heroin. The statistics for 2016 are expected to be released by July, according to county officials.

The epidemic traces back to the boom in prescribed pain pills from the 1990s through early 2000s. Prosecutors didn’t start criminalizing physicians for opioid overdose deaths until recent years.

In 2012, police arrested a Los Gatos doctor accused of running a “pill mill.” Dr. Jasna Mrdjen dispensed powerful painkillers with little regard for whether patients abused them or shilled them on the black market, according to prosecutors, who charged her with involuntary manslaughter. But until recently, pill mills operated with relative impunity. Meanwhile, throughout the nation, doctors paid by pharmaceutical giants relentlessly pushed brands like OxyContin, Percocet and Norco.

Now, it’s up to local health officials to push the antidote.

Paramedics have carried naloxone kits since the medication was patented in 1961 and approved as an overdose treatment a decade later. But health and safety concerns kept it out of the hands of some frontline workers. Since the intranasal spray became available a year ago, however, local governments have been trying to get Narcan in the hands of as many people as possible.

Last fall, Santa Clara County began distributing the two-dose naloxone kits, which typically go for about $70 at pharmacy, free of charge to anyone who walks in for an hour-long training at one of a few local methadone clinics. In August, the Foothill-De Anza Community College District Police Department took a page from San Francisco and a growing number of other law enforcement agencies by requiring cops to carry Narcan while on duty.

“Anyone who comes into contact with people who use [opioids] should learn how to administer Narcan,” said Mira Parwiz, an addiction specialist and clinic director for Santa Clara County’s Department of Behavioral Health Services. “Police are often the first ones to arrive at the scene of an overdose, so we’re trying to spread the word that this treatment is available to them.”

As the number of pain pill prescriptions rose to new heights in the early aughts, so did their potency. When states finally created prescription monitoring programs to crack down on unscrupulous doctors, patients who had become addicted turned to cheaper street drugs, like heroin.

By the latest count, opioids caused two-thirds of the nation’s drug overdose deaths. More people die from opioids than car crashes and guns. Although the toll is far worse in rural states and big cities, the South Bay has seen a steady uptick this past decade.

“It’s taking a little bit longer to come here compared to other parts of the state,” Parwiz said. “But it’s still a very serious problem. And the effects are primarily on the younger people. We’re seeing more and more young kids get addicted, and more of the elderly. The young kids, a lot of them play sports, get injured, get prescribed pain pills, and the next thing they know is that they’re hooked. It snowballs from there.”

Amy Cooper, who sat in on the Narcan training session with Foberg last month, said she wishes someone had been there to administer the treatment to her son, Jon Gottlieb. It was on a Fourth of July getaway in 2014 when she got the dreaded call from San Jose police. Her son was 26 years old when he died from a toxic cocktail of alcohol and Norco, which, as she found out later, was prescribed by a dentist.

“If it happened to my family, it could happen to any family,” said Cooper, who has since volunteered her time with the National Coalition Against Prescription Drug Abuse to raise awareness about the dangers of opioids. “We really need to spread the word, not only about the dangers of prescription painkillers, but also about this treatment that can basically bring people back to life during an overdose.”

Dr. Deborah Stephenson, who works for the county’s public health department and specializes in preventative and addiction medicine, urged anyone who uses opioids to never use alone.

“People tend to want to isolate when they go use,” she said. “That’s the danger, that they lose consciousness and there may not be anyone there to help. But what we’re seeing in other cities, including San Francisco, is that the people who are saving the most lives are people who have addiction issues themselves, because they know the signs and they’re around other users.”

Foberg said she’s also concerned about what happens after someone administers Narcan, which sends the user into sudden, gut-wrenching withdrawal. It may save their life, but because it empties the opioid receptors of their drug of choice, it also intensifies cravings.

“We need more places for people to detox,” said Foberg, who wound up giving her Narcan doses to someone in a local homeless camp. “If people want to get clean, that’s a narrow window and you want them to have somewhere to go or they’ll just use again.”

But relapse—often repeated relapse—is part of recovery for so many people, she added. And that shouldn’t be fatal.

For more information, contact Amy Cooper, the South Bay contact for the National Coalition Against Prescription Drug Abuse, at 408.724.0140. To get trained in how to administer Narcan, walk-ins are welcome at 1pm each Friday at the Santa Clara County methadone clinic at 2425 Enborg Lane in San Jose. There’s also a smartphone app, available here, that tells users where to find the nearest supply of naloxone.