People arrested in Santa Clara County for curfew violations and other non-violent offenses while protesting the death of George Floyd will not be prosecuted.

Assistant District Attorney Terry Harman affirmed as much in a June 10 memo that her office shared with reporters earlier today. “Our general policy should be to decline to file curfew violations and failure to disperse violation,” she wrote. “First, peaceful protests honor our First Amendment. Second, the protests have been borne out of outrage against overt, systemic and implicit racial bias in our criminal justice system.”

Criminalizing peaceful dissent would, if anything, be counterproductive, Harman noted.

“Indeed,” she continued, “prosecution may be viewed as an attempt to silence or punish the protesters, when the reality is that we uphold the values of our community and our office by listening to the protesters without getting distracted by curfew violations that do not trigger public safety concerns.”

Protests that erupted in the wake of Floyd’s killing have yielded four arrests for violent offenses, according to a review by DA that looked at May 31 through June 1—nights when police were enforcing curfew orders.

An independent review of arrest records by this organization showed no arrests for violent crimes on May 29, the first night of the protests, and five for resisting arrest. On May 30, records show SJPD arrested two people for resisting and five for violent crimes or burglary. One of the arrests on the second day of protests involved that of 19-year-old Cole Rochlitz, who’s accused of running his car over protesters.

While some citations are still being processed by local cities, most of the protest-related cases submitted for DA review are for non-violent offenses, according to Harman.

A review of arrests logs from May 31 to June 2 in San Jose—the county’s largest city, by far, and the epicenter of local protests—shows that the majority involved municipal code violations related to the hastily-enacted curfew order.

The fate of folks slapped with standalone muni code violations in San Jose rests in the hands of City Attorney Rick Doyle.

In an email today, he said said his office has yet to make a determination about how to handle the curfew cases, which violate Title 8 in the municipal code and are punishable by fines of up to $500 or, technically, even incarceration.

“We’ve only seen a few, but my understanding is there are approximately 75 citations,” Doyle told San Jose Inside. “We’ll be going through them case by case before determining whether to prosecute or dismiss in the interest of justice.” 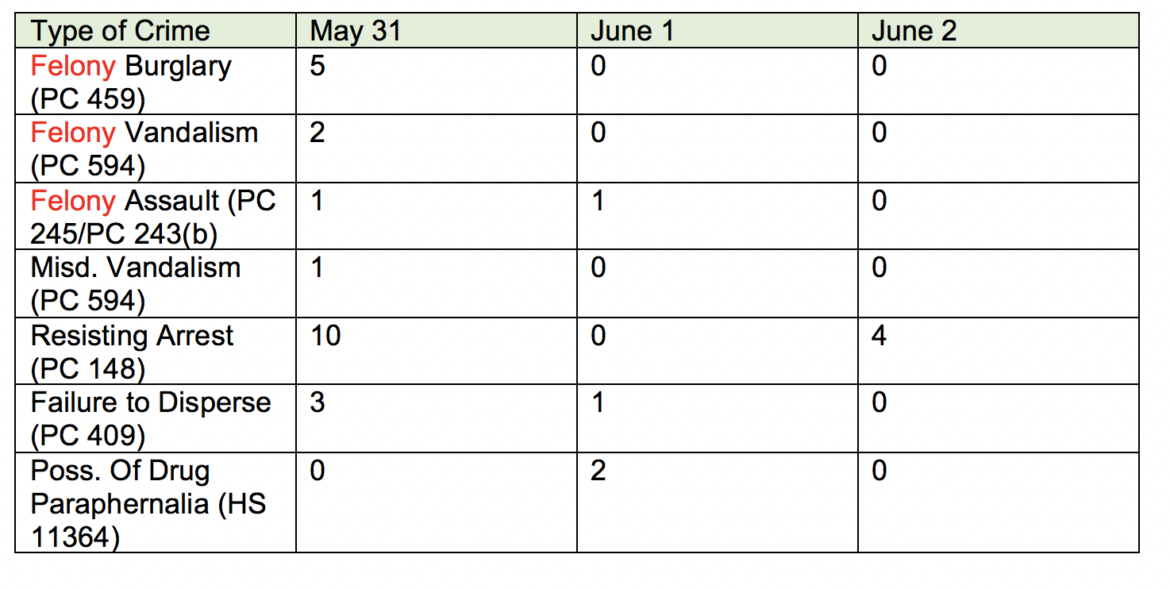 However, muni code scofflaws who also racked up misdemeanor or felony charges—say, for vandalism or other such crimes—will still have to reckon with the DA. Per Harman, several cases involve both infractions and crimes

In addition to curfew violations, police made a total of nine felony arrests for burglary, assault on an officer and vandalism from May 31 to June 1. The majority of misdemeanors were for alleged violations of Penal Code §148, that is, for resisting arrest.

“The misdemeanor and felony crimes committed during the protests that involve destruction of property, theft, assaults on police officers and resisting arrest require us to pursue accountability,” Harman explained. “These crimes were not a necessary component of the protests; these crimes were committed by people who made choices to destroy property and commit assaults. In these matters, we should file criminal charges in those cases that meet our filing criteria.”

Of course, the DA won’t just take police officers’ word for it, she assured, and will review all applicable body-cam footage to determine what charges, if any, should be filed.

“Our community is interested and engaged, and that is a very positive thing,” Harman concluded. “We need to acknowledge that engagement and respond with transparency, education, and openness to change. Ultimately, our responsibility is to seek justice, and in the case of peaceful protest actions, declining prosecution is appropriate and just.”

Since the city announced the curfew so soon before it began citing people and—by SJPD Chief Eddie Garcia’s own admission—before officers were even briefed on the order, Mayfield said Doyle would be wise to take a similar course.

“I would say that the declaration of a curfew is likely illegal and unconstitutional in any case,” he told San Jose Inside in a phone call. “So, I’m thrilled to see that the DA will not be prosecuting these cases, and I hope the city follows that lead.”