UPDATE, Aug. 10, 2016: Court workers agreed to enter mediation, but will continue the strike. “Santa Clara County Superior Court and the Superior Court Professional Employees Association have agreed to mediation to help the parties resolve our differences,” the union announced Wednesday.“We have agreed upon a professional mediator, with whom we will meet tomorrow, Thursday Aug. 11, in San Jose.”

Hundreds of clerks camped outside the Hall of Justice on Hedding Street in San Jose hoisting up signs that read, “Shame on the judges for allowing this to happen,” and “No raise in eight years, no justice.”

The walkout marks the court’s first strike in 14 years, according to workers, who say they’ve gone eight years without a raise. Union reps estimated that about three-quarters of the 383 members took part in the protest, which began Aug. 3 after negotiators reached an impasse.

“We’re sorry that we’re hurting the public,” said 36-year court clerk Ingrid Stewart, president of the Superior Court Professional Employees Association. “But we’re dealing with a 30 to 50 percent vacancy rate, cuts to service and money being spent on new buildings instead of the people who keep the courts in operation.”

Stewart added that the courts gambled with public money by building a $208 million Family Justice Center in downtown San Jose instead of investing in workers who struggle to afford living in Silicon Valley. To drive the point home, union lobbyists set up a craps table outside the courthouse Monday morning, the Mercury News reported.

Court interpreters raised similar concerns about court spending in an investigative report published by San Jose Inside in June.

Court officials said it’s inaccurate to portray the new courthouse as a choice between new facilities and employee wages.

“The Family Justice Center will save taxpayers hundreds of millions of dollars and help local families and those with serious mental health and substance abuse issues,” the Santa Clara County Superior Court wrote in a statement last week. “It’s unfortunate that it is being used to justify attempts to shut down the Court. The Family Justice Center is owned by the State of California and its funding has no direct relationship with employee wages. We are saddened by these efforts to portray the Family Justice Center as a choice between building materials and wages, especially since the Court’s last, best final offer would give a 9.5 percent net wage increase to employees.”

In 2015, the clerks’ union declined a 4.5 percent wage raise spread out over two years. This summer, the offer ticked up to a 5 percent pay increase for 88 percent of workers with at least six years in the court’s employ.

Last week, the union turned that down, too, because they want to see raises extended to future years to account for increases in cost of living. Stewart said employees want a second-year raise of 3 percent.

Court officials urged members of the public to still show up to previously scheduled hearings, even though they will likely get postponed to a later date. There will be a grace period for anyone who misses a deadline because of the strike, officials added.

The employee association has set up a GoFundMe account to raise money for workers. By end of day Tuesday, donations approached $32,000. 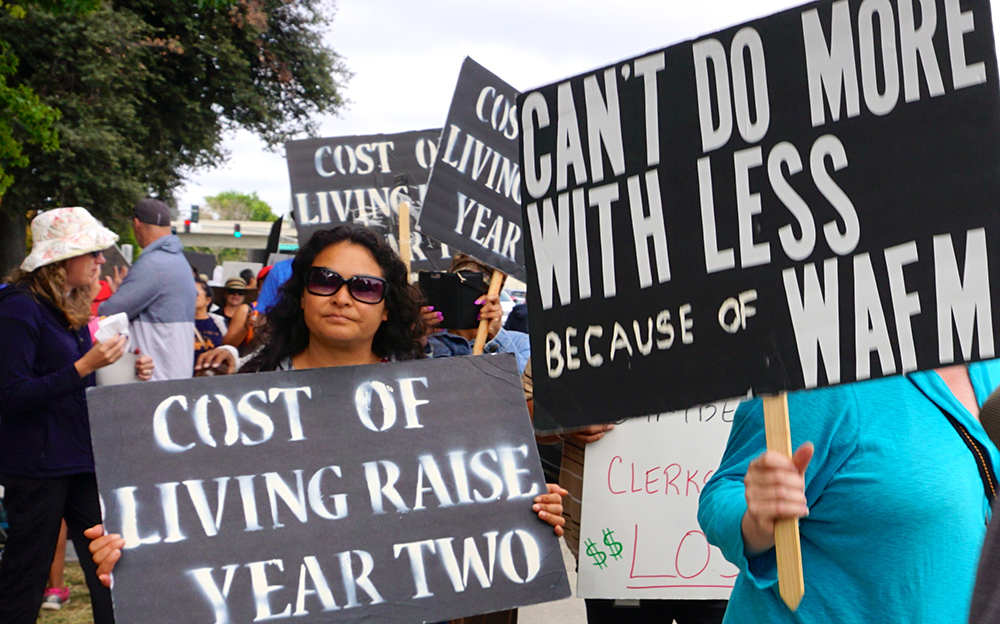 Hundreds of court employees protested on Tuesday, day five of the strike. (Photo by Jennifer Wadsworth)

Below is a rundown of services still available during the strike, according to a press release issued by the court. 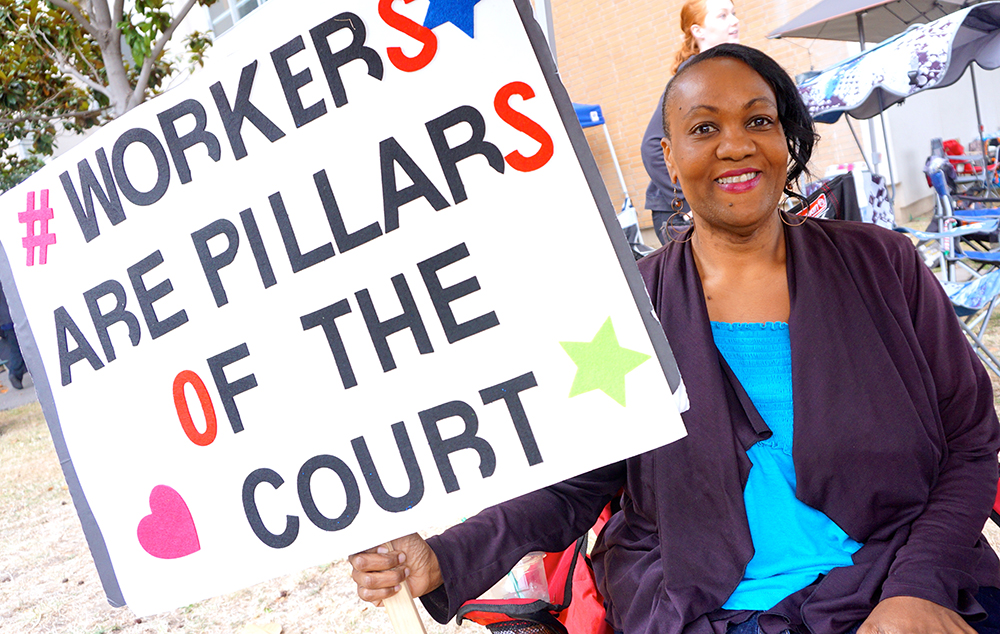 Strikers have camped out every day from 7am to dusk since the walkout began last week. (Photo by Jennifer Wadsworth)