Fifteen officers will spend the next three months piloting three types of cameras, two manufactured by Taser International and the other by Vievu. One will be worn on protective eyeglasses and the others on lapels. Each camera costs up to $600, so the city expects to spend somewhere around $1 million to equip each of the San Jose Police Department's 950 sworn officers.

San Jose sped up the timeline, which originally set field testing to begin in September. Under the revised schedule, the city will end field testing in October, review the results  and choose a device by next spring. The city expects to officially deploy the cameras by June 2016.

SJPD formed a body camera committee made up of San Jose residents, police staff and members of its union, the Police Officers Association, to drum up a draft policy that addresses the privacy of the officers and the public.

The policy—up for review here—prohibits officers from tampering with the device's evidence management software. Supervisors will have to ensure that video of officer-involved incidents are uploaded as soon as possible. Officers will rely on their own reasonable judgment in deciding when to switch the camera off, the policy states. If they delete a recording of an incident, they have to explain why.

The department states that all recordings will be considered evidence. That means that, like 9-1-1 calls, media and the public could request a recording by way of a formal Freedom of Information Act request. The department could, however, block those requests as videos could be considered part of the investigative record.

Before her retirement this month, Independent Police Auditor LaDoris Cordell—who has been pushing for police body cameras for years—criticized the policy, as drafted, for giving officers too much leeway and providing too little transparency. But the policy is expected to undergo more revisions, especially once the trial period ends and the resulting data is analyzed.

Throughout the trial, police will collect feedback from the public, starting with this survey. Police also urge the public to contact the body camera project management team for questions and concerns not addressed on the department's resource page.

Once the trial period ends, the city will look at the number of complaints against officers compared to similar periods in previous years, to see if the cameras serve as a deterrent.

Though not a panacea, cop cams can be useful in eliminating false or exaggerated claims by both officers and civilians, according to the American Civil Liberties Union. But their effectiveness depends on good policy, the civil rights group noted.

"Perhaps most importantly, policies and technology must be designed to ensure that police cannot 'edit on the fly' — i.e., choose which encounters to record with limitless discretion," the ACLU wrote in a white paper on the subject. "If police are free to turn the cameras on and off as they please, the cameras' role in providing a check and balance against police power will shrink and they will no longer become a net benefit." 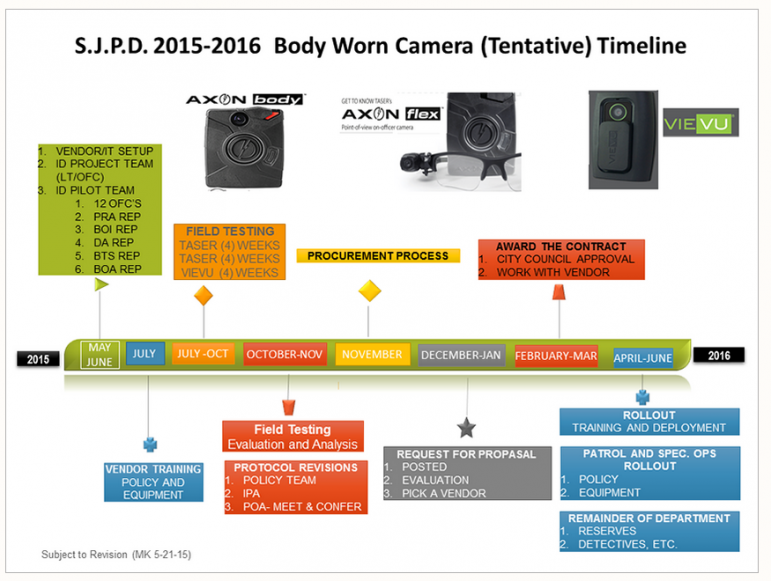