The first of four community meetings on the spending plan takes place Monday, with three more set for May 17, 18 and the 22 in different parts of the city. Feedback from those meetings will help the city fine-tune its $3 billion annual budget, which comes up for a final vote toward the end of June.

Liccardo’s cautiously optimistic outline projects a $12.4 million gap in the coming year that will need to be bridged with new revenue or spending cuts. Looking out to 2022, that projection grows to $88.9 million. That’s despite two new tax measures approved by voters in 2016 for transportation upgrades and essential city services.

Those figures don’t even account for the city’s $3.8 billion in unfunded pension liabilities and $1.5 billion in deferred infrastructure maintenance. Liccardo has pointed out that San Francisco, Oakland and other big cities face similar challenges.

Driving the deficit in San Jose, according to the mayor, are growing pension costs and declining revenue from sales and construction taxes. However, the mayor’s projects do not account for the impending sales of the Hayes Mansion, a $36 million judgment against the federal government or savings from bond refinancing.

Liccardo pointed to important milestones in the past year, which helped the city climb out of a protracted recovery from the Great Recession. Voters approved Measure F, which replaced the city’s pension framework and will save an estimated $42 million a year. The city also allocated more money to reduce emergency response times, shelter the homeless and repave old roads.

The mayor notes that his latest spending blueprint will continue to prioritize what residents say are their highest priorities: public safety, long-term financial stability, housing the homeless and repairing roads. Here’s a cursory look at some of Liccardo’s ideas, which will ultimately come to a vote by the City Council.

To read the mayor’s entire budget plan, click here. Be sure to take a look at the five-year forecast on which he based his projections and the city’s proposed capital budget—found here and here, respectively. Times and locations for the upcoming community budget meetings are posted below. 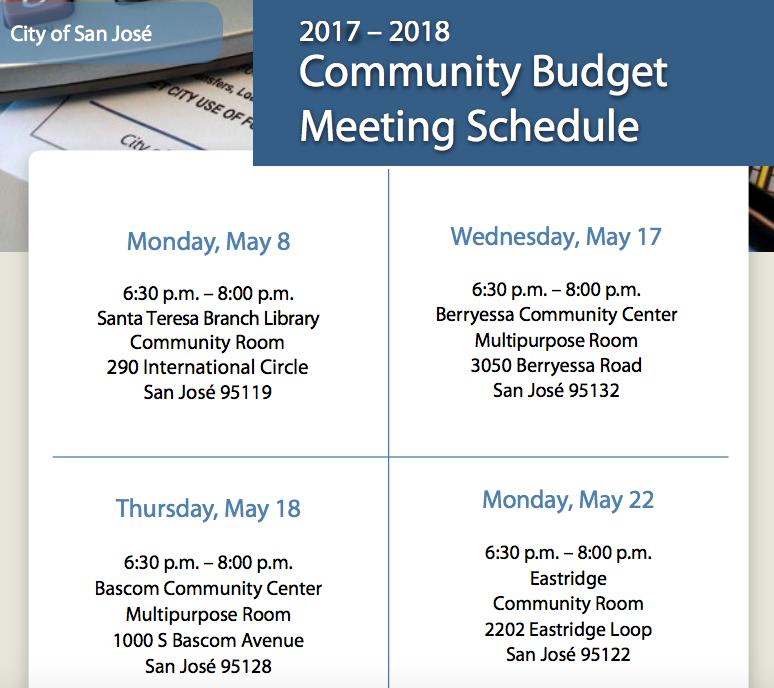