Eunice Hernandez has spent the past two years rallying low-income renters in a campaign to bolster tenant protections and stem the tide of displacement in San Jose. With her colleagues at the nonprofit Sacred Heart Community Service, the 32-year-old organizer urged residents to share their personal stories at protests and public hearings, putting a face on what advocates call an epidemic of evictions.

Those efforts culminated in a historic win last week when a divided City Council voted to outlaw no-cause evictions. San Jose—one of the few major California cities to let landlords oust tenants without telling them why—will now require landlords to cite one of a dozen approved reasons before refusing to renew a lease. Those causes include non-payment, property damage or crime.

But until the so-called “just cause” ordinance takes effect, which could be months from now, the measure designed to protect renters puts them at greater risk of retaliation.

“We are keeping an eye out and warning tenants, especially the ones who spoke out,” Hernandez says. “We’re handing out fliers with a hotline number that people can call for help if they need it.”

Come May 9, the council will vote on whether to roll out the ban immediately or by the end of summer. Applying it right away would require a supermajority, which is unlikely from a council that narrowly banned no-cause evictions in the first place. The city’s decision in 2016 to lower the cap on yearly rent hikes from 8 percent to 5 percent prompted similar fallout, Hernandez says. With a few months before the new policy was enacted, landlords took advantage of the delay to raise rents to the legal limit. Others simply evicted tenants so they could charge the next occupants market rates.

“That’s one of the lessons we learned from last year,” Hernandez says. “We can approve a new policy, but people aren’t safe until it’s active. Families have been living in fear. We needed just cause a long time ago, and we definitely need it now—as soon as possible.”

Also delayed until final council approval are new requirements under the Ellis Act, a 1985 state law that allows landlords to clear a rent-controlled building if they move in or tear it down. San Jose will soon take the lead of San Francisco by requiring landlords to cover some of the moving costs for tenants displaced by Ellis Act evictions.

The policy changes split San Jose’s elected leaders along ideological lines, with supporters calling housing a basic need and opponents framing it in terms of property rights. It also signaled how Mayor Sam Liccardo, who opposed the new eviction rules, can no longer count on a working majority on the council to advance his agenda.

Councilman Johnny Khamis, a landlord who voted against the new policy, notes that it does nothing to fix an affordability crisis caused by an intractable shortage of housing. Council members Chappie Jones, Dev Davis and Lan Diep joined his opposing vote. Freshmen council members Sergio Jimenez and Sylvia Arenas drafted the winning ordinance, which called for stricter controls than those prescribed by city housing staff.

Vice Mayor Magdalena Carrasco, who was appointed by Mayor Liccardo and considered the swing vote going into the April 18 meeting, backed the newcomers’ proposal along with council members Don Rocha, Raul Peralez and Tam Nguyen.

“The new composition of the council was really put to the test by this vote,” Nguyen told San Jose Inside. “It shows how when it comes down to a very important and difficult situation like this, people come back to their principles.”

As someone who once owned a home and now rents a shared space in the district he represents, Nguyen says he sees both sides of the discussion. But tenants made a more convincing case, he adds, while landlords presented little in the way of solutions.

“I understand that landlords want to get a fair return on investment,” says Nguyen, who lost his house in a divorce just before getting elected to the council in 2014. “I can live with that. But I thought they should have come up with a better story. For me, I thought the vote was a show of people standing firm on their core values and their constituents.”

For decades, San Jose had some of the weakest tenant protections of any big city in California—especially for the progressive-leaning Bay Area. But as the population of renters began to grow in the wake of the Great Recession and the average asking price for rentals in the nine-county region rose by 66 percent from 2010 to 2016, tenant protections once again entered the local political debate.

Peralez spearheaded San Jose’s rent-control revisions last year, which marked the first significant change to the policy since its adoption nearly four decades prior. Tenants continued that momentum through grassroots organizing and by calling attention to mass evictions, unscrupulous landlords and the link between the region’s widespread displacement and immense homeless population.

Despite fears of retaliation while the no-cause eviction policy remains in limbo, activists cite the reforms as proof that renters have come into their own as a political force in Silicon Valley. It also came on the heels of another victory for tenants in nearby Mountain View, where a voter-approved rent control measure survived a legal challenge from the California Apartment Association, a coalition of property owners that lobbies against rent regulations throughout the state.

“What we’re seeing, I think, is a growing awareness that rent control is the most realistic, effective tools that we have to deal with in this housing crisis,” says Daniel DeBolt, one of the chief organizers behind the rent control campaign in Mountain View. “Business as usual isn’t going to cut it.”

Former San Jose Mayor Chuck Reed, an attorney specializing in real estate law, says the debate over rent control misses the point entirely. Economists largely view rent control and other price controls as ineffective, or a way to push costs to other people. To fix the affordability crisis, Reed says, Californians must building more housing. But incentivizing new development would require sweeping reforms that have failed time and again for decades. 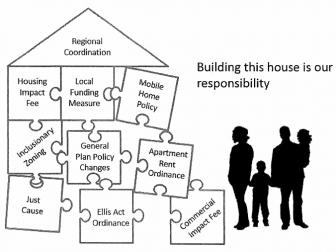 “The market is already totally distorted in San Jose because we haven’t built sufficient housing to meet the demand created by jobs for the past 40 years,” Reed says. “San Jose has made a huge effort to create jobs, but is much less successful at getting housing. I don’t think there should be rent control at all.”

Price controls are hardly the only distortion at play, according to University of California, Berkeley, professor emeritus Richard Walker, an outspoken critic of market fundamentalism. In a column for the East Bay Express, he noted how income inequality, speculation, tax havens and tax cuts all drive the affordability crisis. Take Proposition 13 as a case in point. The 1978 law keeps property taxes far lower than the rest of the country and discourages local governments from investing in housing because it generates less tax revenue than commercial development.

Even proponents of rent control concede that it’s merely a stopgap. But absent a statewide fix, local governments have no choice but to act, tenant advocates say. In a memo issued before the just cause vote last week, Councilman Rocha presented rent caps and eviction protections as one part of a whole suite of solutions that includes construction fees for affordable housing, local funding—such as a billion-dollar bond measure Santa Clara County voters approved last fall—and protecting existing rentals such as mobile homes and older apartments.

“I agree that rent control isn’t a full solution,” DeBolt says, “but it does protect people from needless rent increases and evictions.”