Under the pelting rain on a recent weekday morning, San Jose Mayor Sam Liccardo joined some of his colleagues to put the finishing touches on the city’s first so-called tiny homes for the homeless.

The cluster of 40 miniature sleeping cabins that cropped up on a Santa Clara Valley Transportation Authority (VTA) property by the Berryessa BART station after years of planning and negotiations is part of a pilot program to provide transitional shelter for the South Bay’s burgeoning homeless population.

“As we’re all muzzling through the rain, it’s too easy to forget that over 6,000 of our neighbors are actually living outside in the rain and somehow surviving,” Liccardo said at the pre-Thanksgiving Day building event. “We have a lot to be thankful for. We critically need to put that gratitude into action to do more to help our friends and neighbors who are struggling.”

Constructed by Habitat for Humanity, each 80-square-foot bungalow features a twin-sized bed, desk, shelves, electrical outlets, heating and cooling systems and some storage. Two larger homes are reserved for people with disabilities, with a ramp built outside for easy access. Residents will share bathrooms, showers and laundry services at a common area called the “wet house.”

The service provider of the project, HomeFirst, is now accepting applications for the tiny houses from partner agencies. Applicants are eligible to stay in a tiny home if they already receive case management. They must also either be employed or demonstrate a strong work history.

The project will prioritize people who can be housed quickly, HomeFirst CEO Andrea Urton said. “Currently, the options they have are encampments that are not sanctioned [and] gets swept regularly, or sleeping in overcrowded shelters—those are literally the two options.” 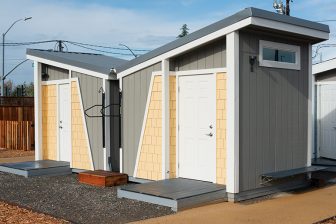 Each cabin is 80 square feet. (Photo by Nicholas Chan)

In the first month, residents will pay rent that amounts to 10 percent of their income, followed by 20 percent in the second month and, if all goes according to plan, 30 percent by the third, Urton explained. She said she hopes that residents will only need to stay at the homes for three months, though HomeFirst will grant extensions as needed.

A case manager on-site will assist residents to ensure that they have a plan to find permanent housing. HomeFirst aims to house 120 residents annually through the pilot, which will continue until January 2022 when AB 1276—a bill by former Assemblywoman Nora Campos (D-San Jose) permitting the homes—is set to expire.

The city had to jump several hurdles to finish the tiny home settlement. When it was first proposed, the idea sparked outcry among a vocal cohort of residents. At neighborhood meetings in 2017, residents said they feared that the project would attract crime and drive down property values.

Liccardo said he hopes to show that such concerns are misplaced. “My goal is to prove them wrong [and] demonstrate how tiny home communities can be great,” he said.

Seattle has also built tiny home neighborhoods and, Liccardo said, “over time, the neighborhoods really do embrace the communities—often adopting them, bringing food out, engaging them in fellowship.”

The VTA site is part of a larger proposal to build 80 tiny homes for the homeless. Habitat for Humanity plans to build another 40 at a Caltrans site near Felipe Avenue. Under SB 519, co-authored by state Sen. Jim Beall (D-San Jose) and his colleague Steven Bradford (D-Gardena), Caltrans can lease unused properties for $1 per month to the cities of San Jose and Los Angeles for these kinds of projects.

But negotiations have delayed the opening of the VTA and Caltrans site. The Mercury News reported that the VTA site was slated to open in June 2019 and the Caltrans location in August 2019. Now, officials anticipate that residents will move into the VTA site this month.

Meanwhile, Habitat for Humanity has yet to install any tiny homes at the Caltrans site. Liccardo said the city had just reached an agreement with Caltrans last month, and that the whole process was slow and complicated by legal challenges.

Liccardo said the city was required to establish an insurance fund against property damage at the Caltrans site, which came with an “unrealistic” price tag. He said that was just one among many sticking points. Now that the city finally inked a deal with Caltrans, he said he’s hopeful that that future negotiations with Caltrans will go much smoother.