Government intervention to combat Covid-19 remains heavily popular among respondents in the latest San Jose Inside Power Poll, but a majority of panelists believe that the widespread availability of vaccines precludes the need for another wave of mandatory lockdowns. 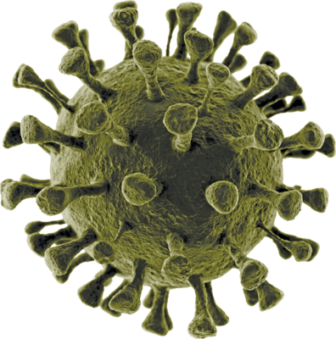 On other Power Poll topics, roughly half of all respondents believe that Sheriff Laurie Smith should resign or serveout the balance of her term and not seek reelection. Despite having been elected to her post six times previously, only 2 percent of respondents say they now support her expected bid for a seventh term in the wake of a civil grand jury’s recent accusations of misconduct against her.

Finally, poll respondents oppose the concept of enacting laws to require property owners to give their tenants first dibs on purchasing their homes in the event that they choose to put them on the market.

Here are the specific questions and responses to our poll:

In the month since omicron coronavirus variant emerged from South Africa, it has become the dominant U.S. variant of Covid-19, with infection levels surging toward new highs. Case rates in cities and among athletes, students and health workers demonstrate just how alarmingly transmissible it is. How should governments be thinking about this latest outbreak? (Select all the answers you agree with, with 1 being your highest priority.) 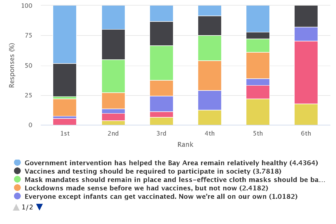 Vaccines and testing should be required to participate in society — Score 3.7818

Mask mandates should remain in place and less-effective cloth masks should be banned — Score 2.6727

Lockdowns made sense before we had vaccines, but not now — Score 2.4182

Everyone except infants can get vaccinated. Now we’re all on our own — Score 1.0182

Should employers require their employees to be vaccinated? 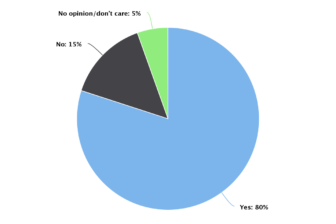 The county’s civil grand jury recently accused Sheriff Laurie Smith of seven corruption-related acts, including trading favors related to concealed weapons permits and failing to cooperate with an investigation into an injured inmate that cost the  county $10 million. What do you think about the state’s first female sheriff? 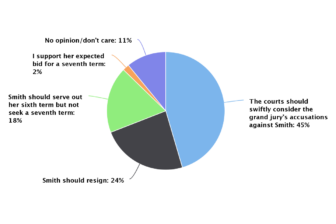 The courts should swiftly consider the grand jury’s accusation

I support her expected bid for a seventh term — 2%

A coalition of cannabis executives recently warned that California’s legal “industry is collapsing” due to excessive taxation and ongoing prohibitions against recreational sales in most cities. As a result, illegal and untested marijuana still flourishes. What should the state do? (Select all the answers you agree with, with 1 being your highest priority.) 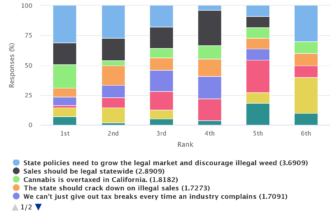 Cannabis is overtaxed in California. — Score 1.8182

The state should crack down on illegal sales — Score 1.7273

We can’t just give out tax breaks every time an industry complains — Score 1.7091

The state should find a way to make legal weed cheaper than the illegal stuff. — Score 1.3091

Localities must retain the right to set their own policies — Score 1.2909

Pot should be heavily taxed, to compensate for its adverse effects — Score .8182

Bay Area cities including San Jose and Oakland are considering ordinances designed to give tenants, cities and housing groups priority when homes come up for sale. Proposals differ, but generally would require landlords to notify such groups if they wish to sell their homes. Landlords could still hold out for the price they desire, but would have to give such buyers priority over other bidders. 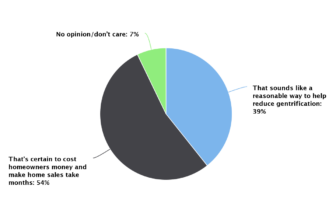 That sounds like a reasonable way to help reduce gentrification — 39%

Analysis of Questions 1 and 2

In the San Jose Inside Power Poll’s five short months, panelists have overwhelmingly supported governmental action designed to make us all safer. So the broad lack of support for a new wave of lockdowns in the midst of the surge in infections from the Omicron variant represents an apparent sea change in our attitudes about the pandemic.

Some 55 percent of respondents agreed with the proposition that lockdowns made sense before we had vaccines, but not now. And that’s the case even as respondents continued to support other governmental actions, with 80 percent supporting employer vaccine mandates, 80 percent also agreeing that vaccines and testing should be required to “participate in society,” and 63 percent agreeing that mask mandates should remain in place but that cloth masks should be banned.

Although almost half of those panelists who expressed an opinion about Sheriff Laurie Smith appear not to have prejudged her and would like the courts to swiftly consider the charges she faces, it can’t be a good thing for her that only one out of every 50 respondents supports her seeking a seventh term. If the sheriff engages in political polling of the general electorate and it is telling her anything comparable, it could well be that Smith’s “expected” reelection bid should not be quite so expected.

It is surprising that support for making things easier on legal cannabis operations was considerably stronger in our San Jose poll than in this month’s simultaneous Oakland Power Poll. Panelists would like to see the state do what it can to help legal weed triumph over the outlaw stuff. Top of the list of voters’ potential solutions is opening up the rest of the state to legal sales, which would clearly have the effect of driving out some of the illegal weed in the roughly two-thirds of California cities that still don’t permit its legal sale.

However, the notion that cannabis is overtaxed in California was only slightly more popular than resistance to offering tax breaks to an industry just because it asks for them. Of course, many industries ask for tax breaks, but few are as demonstrably troubled as California’s legal weed merchants, who face complex regulations, a still-intact network of illegal competitors free to ignore those regulations and a glut of well-funded competitors.

Some 58% of respondents with an opinion opposed the concept of giving tenants, cities and housing groups priority when homes come up for sale. Given the ratio of tenants to homeowners, it appears safe to say that a majority of property owners and even a fair number of tenants oppose the idea.

San Jose Inside Power Poll is not a scientific poll. Rather, we ask questions of influential people with a wide range of viewpoints to help advance informed dialogue about the city. Power Poll is studiously non-partisan.