Napoleon Manzano found his underage victims on Snapchat, authorities say. In December 2017, the 21-year-old San Jose man allegedly used the app to lure two girls, ages 13 and 14, to his house on separate occasions, where he plied them with weed and alcohol before raping them.

The San Jose Police Department arrested Manzano last month on felony charges of lewd acts with a child, oral copulation, rape by force and sexual penetration and a misdemeanor charge of contributing to the delinquency of a minor. It’s the kind of case involving online connections that San Jose police say they encounter more often.

Yet, such investigations can only partly account for the 263 percent increase in the number of rapes reported to SJPD in the past decade—from 217 in 2007 to 571 last year. That’s the highest level of reported rapes since the early 1990s, according to the FBI’s annual Uniform Crime Report. San Jose’s year-to-year increase stands at odds with national figures. According to the U.S. Department of Justice’s National Crime Victimization Survey, sexual violence nationwide has fallen by 63 percent since 1993, from a rate of 4.3 assaults per 1,000 people to 1.6 per 1,000 in 2015.

“I think it has to do with our victims having more access to resources, lack of fear in reporting and having someone to lean on to help them through the process,” Garcia says. 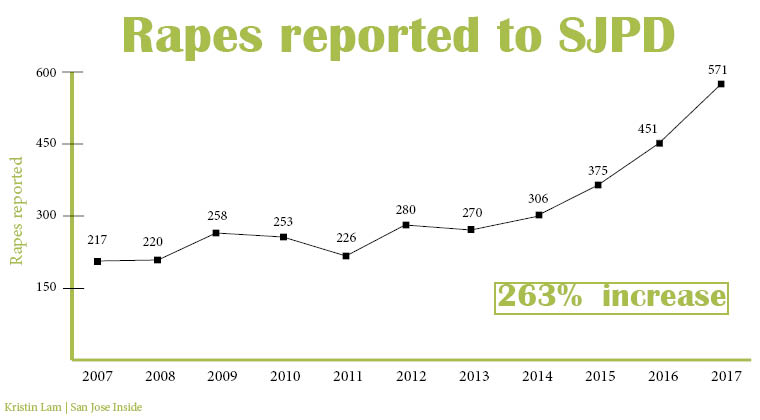 “We have certainly experienced an increase in requests for support as a result of the Me Too movement,” Crosby says. “I hope it is a sign that survivors are getting the support that they are choosing for themselves and that more people are aware of the support that is available and accessible to survivors.”

Historically throughout the U.S., only 5 to 20 percent of rapes get reported, according to the Rape, Abuse and Incest National Network. Most survivors never go to authorities because they don’t believe law enforcement will help them, per the nonprofit advocacy network. Or, more often than not, they worry about retaliation.

Indeed, fear of retribution has historically prevented survivors from speaking up—especially since the vast majority of them were victimized by a personal acquaintance. Garcia says 74 percent of adults and 80 percent of juveniles who reported rape in San Jose knew their attackers. He says SJPD depends on its partnerships with crisis centers and nonprofits to encourage victims to come forward.

“We can’t do this on our own,” Garcia says. “We know it’s an incredible violation when this occurs. Our victims need help, many times, to come forward.”

It’s possible that San Jose’s collaboration with victim advocates has prompted more survivors to contact police. Another factor that may be contributing to the higher reporting rate is that the legal definition of rape has changed.

For more than eight decades, the FBI classified “forcible rape” as “the carnal knowledge of a female forcibly and against her will.” In 2013, it reclassified the crime as “penetration, no matter how slight, of the vagina or anus with any body part or object, or oral penetration by a sex organ of another person, without the consent of the victim.” Naturally, that broadened the scope of the crime. The FBI estimated that the old terminology excluded 40 percent of rapes.

According to San Jose Inside’s analysis, several cities in Santa Clara County saw an uptick in the number of recorded assaults—in the past decade overall and after the FBI updated its definition.

While SJPD has no definitive answer for what’s leading to the increased number of reported assaults, Ta says his unit is constantly working on preventive measures. The national Internet Crimes Against Children Task Force works with Ta’s unit to train teenagers who may be vulnerable to sexual exploitation through social media such as Snapchat or Facebook. Sexual assault detectives also provide survivors with resources and referrals to advocate services depending on their cases.

“If we see certain patterns that could be considered reckless, we try to bring that to their (survivors’) attention,” Ta says. “We try to see if they can try to change the way they do things to cause them to be less apt to be victimized with regard to dating apps or other things like that.”

That heightened focus on prevention may be encouraging more people to turn to police to report crimes, says Crosby, of the YWCA. Assemblyman Evan Low (D-Campbell), who authored legislation last year to raise money to process untested rape kits, says agencies must ramp up outreach to underserved communities to make it easier for them to notify police when a crime occurs. LGBTQ folks or those who speak English as a second language face barriers to support services, he explains, and undocumented immigrants also fear reporting because of the threat of deportation.

“We need to make sure that we have a safe environment,” Low says, “not only in the workplace but also at home, where people feel like there are policies in place that do not support retaliation and allow for these things to occur in a safe and protective fashion.”