At the Vermont House on Jan. 31, Liccardo and Villaraigosa talked about how to tackle veteran homelessness, the affordable housing crisis and economic inequality in Silicon Valley and the rest of the state.

Before the news conference announcing Liccardo’s endorsement, Abode Services Executive Director Louis Chicoine gave officials a tour of the Vermont House, a facility that was recently renovated to house some of Santa Clara County’s homeless veterans.

The facility’s two buildings contains 16 single-occupancy units, which cost 30 percent of a resident’s income. Abode, a homeless housing nonprofit that began leasing the place up in December, provides supportive services for residents.

Louis Chicoine (right), executive director of Abode Services, gave Liccardo and Villaraigosa a tour of the Vermont House, which was renovated to house homeless veterans. (Photo by Kristin Lam) 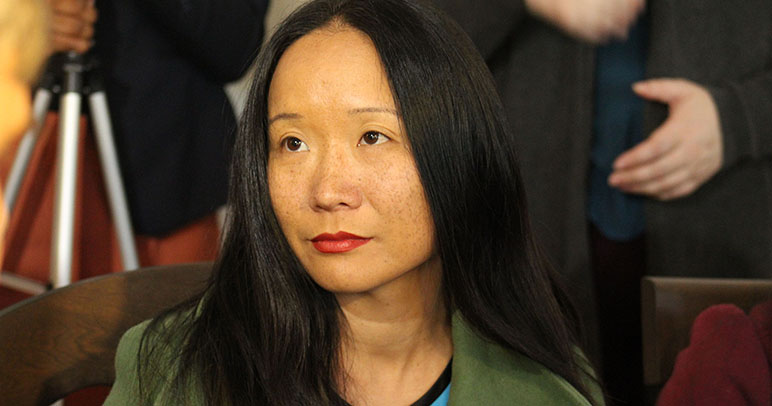 “Projects like this one here at Vermont House gives us the opportunity to be a part of other solutions that affect the housing crisis,” said Wang-Cross, noting that Habitat for Humanity provided general contracting services for the Vermont House. “We’re really excited to be here and to be a part of this. And particularly to be here to help out the veteran community, a community that has done so much in service to the rest of us.” 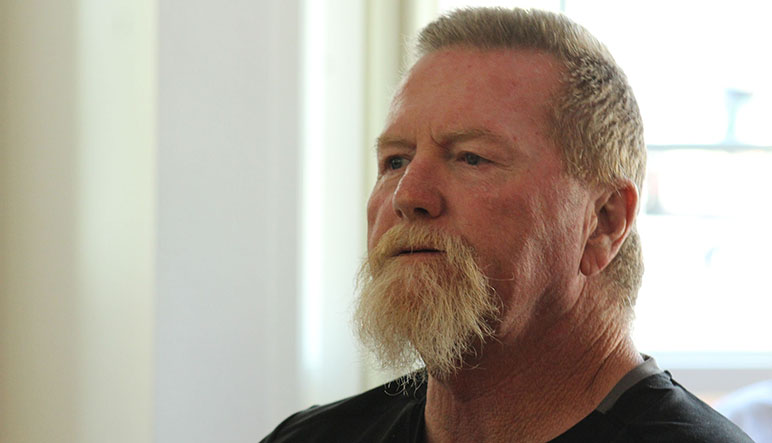 Attendees expressed concerns about veteran homelessness, affordable housing, and economic opportunity. Vietnam War veteran Chris King talked about how he found himself homeless. First, he said, a jiu-jitsu student broke his neck after class at the San Jose Job Corps. Then his father died, he lost his job, and he went through a divorce.

“I started taking pain medication and relapsed,” the ex-Marine said. “I was homeless for several years. Fighting addiction and I got clean and sober again. I was going to the homeless clinic here in East San Jose and I met a social worker named Livy.”

His social worker referred King to Abode Services, where he met Chicoine, who found him housing in a matter of months.

Navy veteran Gary Valentino Hollis also recalled being homeless and described the struggles of homeless veterans who are looking for opportunity.

“I don’t live in a perfect world,” Hollis said, fighting back tears. “But eating out of garbage cans is not good. And drinking out of toilet stools is not good. And getting someone’s leftovers and they didn’t eat the scraps is not a fun place to be in your life.”

Hollis said he got back on his feet while staying at a shelter for a couple years. Then, he found Abode. These days, he runs his own carpet cleaning and janitorial business. He called for stronger leadership to push for more affordable housing, and for more funding to help military veterans start their own businesses.

“There’s someone there right now walking around with a sign,” he said. “I know you guys have seen them and they will work for food or whatever—we need to stop that. We spend billions of dollars for war that we shouldn’t have homelessness veterans. We serve and protect this country.” 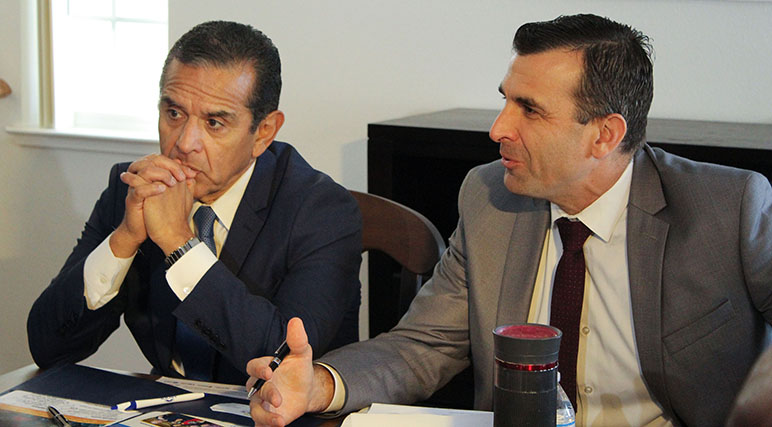 Villaraigosa listened to and commented on concerns shared during the discussion. (Photo by Kristin Lam)

Villaraigosa thanked the group for sharing their stories and for their work to create solutions to homelessness. He also reflected on the economic inequality in the state and how to get resources to address the affordable housing crisis.

“If you look at L.A., San Jose, San Diego and San Francisco, we’re the engine of the California economy,” Villaraigosa said. “We’ve got to get the workforce, our veterans, all of the people who are generating that economy, the housing that they need.”

“I need a partner in the governor’s office that’s going to push and streamline regulations to get the housing built, to ensure that we have the funding we need to get veterans and homeless off the street,” Liccardo said. “Antonio Villaraigosa clearly has the experience as a big city mayor in LA. He’s done this, he’s proven he has bold leadership. We need his ideas and his effort behind us.”