San Jose will raise its minimum wage to $15 when the clock strikes 2019. The City Council’s unanimous vote Tuesday is part of a regional effort to up the hourly wage floor ahead of the statewide schedule to reach $15 by 2022.

Raising baseline to $15 will give 115,000 San Jose workers a collective $350 million-a-year pay bump, according to a report by the Institute for Research on Labor and Employment at the University of California, Berkeley. Doing so for all of Santa Clara County would give 250,000 workers a 20 percent raise amounting to a combined $800 million a year, per the report.

The study found that there would be a net loss of 1,020 jobs if the city acts alone, but no loss at all if the entire nine-county Bay Area joins the “fight for $15.” There will also be a projected increase of 0.3 percent over a three-year period.

San Jose’s vote this week brings it in line with several other cities in this county. Campbell, Milpitas, Santa Clara and Saratoga are expected to follow suit in the coming months. It also marks the nation’s first coordinated regional effort to raise the wage floor, according to Silicon Valley Rising, a coalition of labor unions and nonprofits.

San Jose emerged as a leader in the movement in 2012 when voters passed a citizen initiative to raise the minimum wage to $10. The measure, which was drafted by a group of San Jose State students under guidance from sociology professor Scott Myers-Lipton, was followed by similar efforts in other cities.

Though Silicon Valley has seen considerable job growth since the Great Recession, median pay levels in the region have continued to fall. 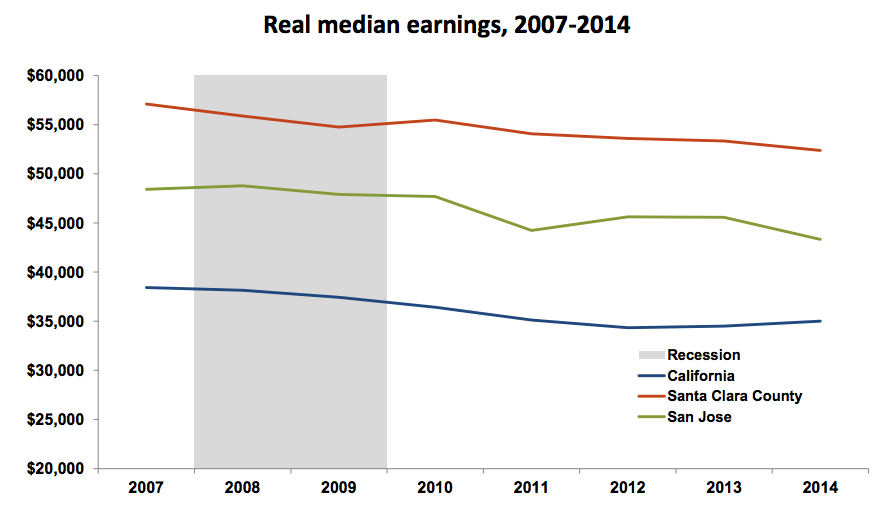 Local officials were split on how soon to phase in to $15 an hour. City staff as well as Mayor Sam Liccardo and his centrist council allies recommended waiting until the middle of 2019 and exempting parolees and foster youth in transitional work programs.

Council members Ash Kalra, Raul Peralez, Don Rocha and Magdalena Carrasco wanted to reach $15 along with other South Bay cities on Jan. 1, 2019—with no exemption.