The officer exodus triggered by the Great Recession and goaded by voter-approved pension cuts in 2012 brought the number of street-ready officers down from 1,391 to 829. That’s a 20 percent drop from the 2008-09 fiscal year, according to a new audit up for review at Tuesday’s City Council meeting.

The drop in the number of sworn officers has brought the average overtime worked by San Jose cops from 225 hours in 2008 to 450 last year, according to the report by City Auditor Sharon Erickson. Police in Los Angles and San Francisco, by comparison, averaged about 100 overtime hours in 2015. 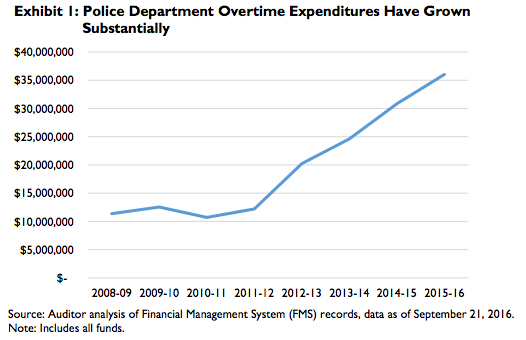 Despite officers in San Jose picking up an average of an extra shift each week, the city still falls short of covering the workload left by the number of vacancies. As a stopgap, the city suspended union rules to assign more officers to patrol last month.

In a report to the council, police Chief Eddie Garcia noted that resignations have slowed this year because of a proposed compromise making its way to the Nov. 8 ballot. Measure F, a settlement reached by the city and its unions, would reverse some of the retirement and healthcare cuts voters enacted four years ago.

If Measure F fails, Garcia predicts that his department’s staffing will continue to plummet. If it passes, he expects to see the trend reverse within the next year. 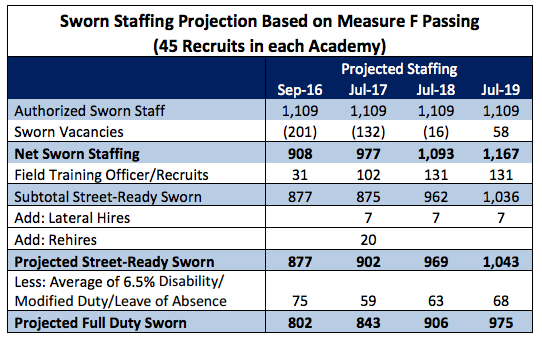 “There are several impacts expected with the passing of Measure F,” Garcia wrote in a memo to the council. “These include, a better candidate pool in recruitment, current staff working past their eligible retirement date, fewer resignations and hiring a minimum of 45 recruits in each academy class moving forward.”

There’s a chance that Measure F’s success at the ballot could lure back officers who left. It would also make San Jose a competitive employer again, Garcia said, improving SJPD’s chances of recruiting from other agencies.

The police chief estimates that Measure F’s passage would help the city reach its authorized staffing level of 1,250 sworn officers by summer 2020.

In her report to the council this week, however, Erickson’s audit spelled out a number of recommendations to make the most of a depleted staff for the time being. She also cautioned about officer fatigue, urging the city to review and enforce weekly work limits for overtime and secondary employment. The weekly limit for all work, including side jobs, is 70 hours, and the daily limit is set at 16. But department policy exempts “mandatory overtime,” which leads to some inconsistencies.

“Our analysis showed that the amount of overtime worked by sworn police varies greatly,” Erickson said, urging a clear limit on work hours to prevent offers from over-exerting themselves.

More from the San Jose City Council agenda for October 4. 2016: