Mong-Van Fousek hobbled into San Jose City Hall on Thursday with all she has left in the world: a backpack and canvas tote full of clothes, toiletries and a few snacks.

“I can’t leave it at the shelter,” she said, “or someone might take it.”

The 71-year-old widow lost everything in the flood that devastated several neighborhoods along Coyote Creek over two days in late February. But she didn’t come to the City Council’s first public hearing about the disaster to complain. After two weeks of enduring cramped quarters at the Seven Trees Community Center shelter, Fousek said, she simply wants to know when she can go back to her apartment in Rock Springs.

“I need the city to help me,” she said, leaning on her walker after publicly addressing her elected officials. “I’m a low-income senior.”

Fousek was one of well over 100 people who packed the council chambers to plead for help and demand answers about local governments’ fumbled response to the flood. 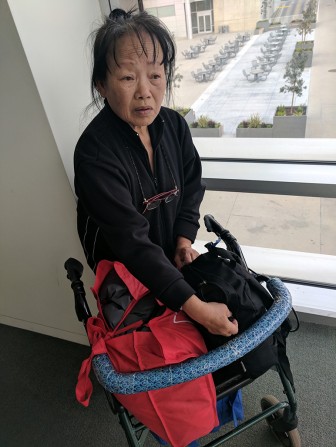 Mong-Van Fousek, 71, implored the city for help resettling after the flood. (Photo by Jennifer Wadsworth)

“I have a really bad cough,” said Rosario Solis, who addressed Mayor Sam Liccardo and his council colleagues on behalf of her family of eight. “My chest hurts, my stomach, everything hurts. At the shelter, everybody’s sick there. I just need a home.”

Especially for the sake of her daughter, who came down with pneumonia and went from weighing 124 to 98 pounds, she said. On Tuesday, Solis took her to the hospital.

“They’re asking me to keep her in a clean place,” she told city officials, “but I can’t because I don’t have a home.” “I don’t want to lose my daughter,” she added.

After battling the city, insurance companies and contractors to repair some $250,000 worth of damage to his William Street home, Garry Johnson said he now has to deal with inexplicable rashes and other maladies. When the flood crept to his door, he said, he gathered his medications, his passport and his dogs—all he could manage to carry—and waded out into the rank water.

“I carried my dogs out through wastewater that was up to my thighs,” said Johnson, a nurse who earns too much to qualify for some of the disaster aid being offered by local noprofits. “I am still scratching, I am still itching, and a number of my neighbors were affected in the same way.”

For weeks now, Johnson said, he’s been asking public health officials to tell people what was in the water and how they know how to treat the symptoms it caused.

Moms holding babies sobbed at the podium. Elderly Vietnamese women spoke about feeling unsafe and worried about their grandchildren staying at the temporary shelters, where they said people have been sneaking in booze and drugs. They wondered aloud what will happen to them after the shelters close, the motel vouchers run out and the state and federal disaster aid has yet to come.

#Coyotecreek hearing: Mother crying that her young child has now spent half of his young life in an unsafe shelter. It's gut wrenching.

Others asked why recovery efforts seem to gloss over the needs of the homeless, who lost their tents, shanties, blankets, backpacks and clothes in the flood. Jolene Jones—a member of the Winter Faith Collaborative, a network of local religious organizations that offers shelter and other necessities to the homeless—said the flood will create “a new crop” of at least 180 un-housed people.

“We need to do more than just write checks,” she said. “We need case management, too.”

The volunteer collaborative not only provides shelter, but opens up church parking lots to anyone who needs a safe place to spend the night in their car. Jones said the city should offer that as well, considering that the volunteer group is way over capacity. She also criticized the way nonprofits have been delegating flood recovery money to only victims who were housed at the time of the flood.

“Homeless people are not getting services,” she said. “They’re being systematically erased out of this discussion."

Councilman Raul Peralez urged the city to offer counseling services to people dealing with depression and anxiety because of having to start all over after the flood.

“The trauma is real, especially for people who have been traumatized before,” Deputy City Manager Kip Harness said. “We’re a little bit later than we should be on this one, but we’re going to make sure that these mental health issues are being addressed.”

Juanita Wilson, a 66-year-old instructional aid who’s living indefinitely at the Seven Trees shelter, said she’s spent the past two weeks cycling in and out of depression and anxiety. Her apartment on Nordale Avenue is destroyed, and she worries about where her daughter will stay when she visits from medical school next month.

City officials repeatedly admitted fault for failing to prepare for and respond quickly to the flood. They blamed a lack of staffing for some of the lapse, but promised to learn from their mistakes.

“There have been many moments of wondering what we could’ve done differently,” City Manager Norberto Dueñas said. “Unfortunately, in life there is no rewind button.”

In a presentation before the public comment portion of the meeting, officials rattled off a play by play. They described how the waters poured from the filled-to-the-brink Anderson Reservoir, over the emergency spillway and down Coyote Creek into neighborhoods and businesses all the way up to North Valley. Using maps provided by the water district, they showed where they were told to expect flooding at a certain flow rate—and how the threshold was far, far lower than projected.

Catherine Sandoval, a Santa Clara University law professor, said in a short speech and more detailed letter that the water district’s predictive models may have been wildly off base, but that anyone with a smartphone could have been alerted to the coming disaster. Besides that, she said, public officials should know by now that when the Anderson Reservoir spills, a flood is imminent.

Even as five feet of water seethed through doors and windows of people’s homes on Feb. 21, the city held fast to the water district’s projections of minor flooding. Yet data from river gauges all along Coyote Creek, which was available online for anyone to see, showed the flood stage approaching by Feb. 19—two full days before the flood.

“We need to look at height, not just river flow,” Sandoval said.

By Feb. 20, Coyote Creek swelled to 10 feet at the Edenvale gauge. By the next day, it topped 14.4 feet—well over the flood threshold—hours before San Jose issued mandatory evacuation orders. The Madrone gauge reached 9 feet on Feb. 20 and crested at 12-plus feet a day later. The William Street gauge marked 22.42 feet early on Feb. 17—the weekend before the flood—and peaked at 33.41 feet when the waters poured over the William Street Park and into homes around Naglee, Olinder, Brookwood Terrace and three mobile home parks along Old Oakland Road.

“Better analysis is a predicate for better notice,” Sandoval told the council.

Bambi Moise, whose Naglee Park home flooded by where a giant Eucalyptus tree toppled into the creek, scolded the city for not using common sense.

“When Anderson overflows, there is a flood, and every one of you should know that,” she said. “You don’t need all these ‘cubic feet per second’ to know. … I’m an old lady, and I could predict this. It seems a lot of you people should’ve been able to predict this as well.”

That warning system would also require “boots on the ground” and door knocking, Assistant City Manager Dave Sykes explained. It would also include digital alerts in Spanish and Vietnamese, which was lacking before this past flood. Another of Sandoval’s criticisms pointed to the city’s failure to account for Silicon Valley’s “digital divide,” the fact that many low-income and non-English speaking residents may not have readily available Internet access.

City spokesman Dave Vossbrink said the city also realized when it was too late that it had no way to notify businesses after hours.

The city relied on Santa Clara County’s AlertSCC, an emergency messaging system that sends warnings to emails, landlines and smartphones. But Vossbrink said the city plans to partner with the county to send those messages not only to subscribers, which make up just 3 percent of the total South Bay population, but to anyone in the geographic area.

“We didn’t have the tools available to us,” Vossbrink said.

It should be noted that the city actually did have the ability to use AlertSCC on its own, but no one was trained on how to use it. When the city finally asked the county to send messages on its behalf, the floods had already overwhelmed hundreds of homes and prompted emergency rescues.

The Federal Emergency Management Administration (FEMA) gives local governments a chance to become certified to issue alerts based on geography rather than subscription, but only the county has obtained that authorization. The city can, if it chooses, apply for that same clearance.

Until then, however, the city could also rely on other agencies to send out geographically based alerts on its behalf. The National Weather Service offered to do so a number of times in a series of multi-agency conference calls before the flood, according to David Flamm, the deputy director for the county’s Office of Emergency Services.

Other recommendations floated by the city Thursday include maintaining the river channels, making sure they’re clear of vegetation, and pressuring the water district to erect floodwalls around Rock Springs.

The water district sent only one person to the meeting: spokesman Rick Callender, who presented a letter from district Chairman John Varela. The letter brought up an important issue on which the water district and the city disagree: who is responsible for keeping Coyote Creek clear from downed trees, brush and trash?

City Attorney Rick Doyle said San Jose might own property along the creek, but no statute indicates that the city should clean adjacent waterways.

“The water district has that ability,” Doyle said.

Callender admitted that there’s been a breakdown in communication between the district and the city in the two decades since the last big flood in 1997. He also said the water district plans to host a community meeting April 28—seven weeks from now—to hear from the communities that flooded.

Councilman Tam Nguyen said he plans to hold a meeting much sooner, March 23 at Tully Library, and water district staff is welcome to attend. Nguyen added that the flood got him thinking about a number of other disasters that the city needs to prepare for.

“I would hope that we learn from this and that we’re prepared for another disaster that’s more prone to happen, which is an earthquake in this area,” he said. “I hope that this is a warning, that this is a lesson learned.”