To address a critical police staffing shortage, San Jose is expected to suspend union protections to reassign dozens of detectives back to patrol.

The City Council on Tuesday will vote on whether to declare a state of emergency, a policy provision that would suspend union protections so department brass could cut overtime in half by moving 47 officers from specialized units to the streets.

Without the declaration, the city would have to negotiate shift changes with the San Jose Police Officers’ Association (POA). But the union supports the plan, which will allow the San Jose Police Department to meet minimum staffing levels for the time being.

Police Chief Eddie Garcia told San Jose Inside on Sunday that the declaration was his idea and he discussed it with POA President Paul Kelly before going to the council.

SJPD’s ranks have fallen from more than 1,400 on the cusp of the financial downturn in 2008 to about 900. Voter-approved pension cuts in 2012 worsened the problem by pitting the city against its unions and leading many officers to find work elsewhere.

In the past four years, SJPD has seen 292 resignations and 198 retirements. As of this month, the number of vacant patrol posts fell to 87 below the 500-officer minimum. 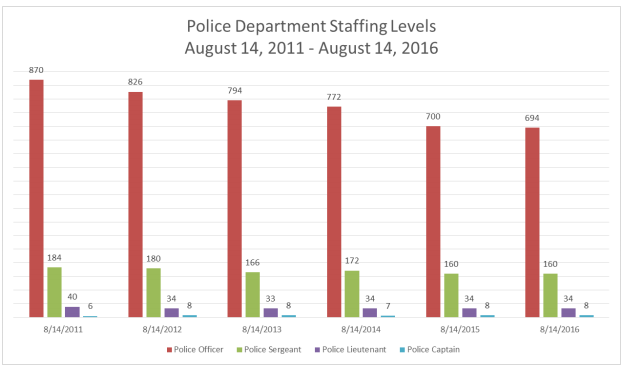 The city finally resolved some of that conflict this year by putting a replacement pension reform plan—Measure F, which faces its own legal hurdles—on the Nov. 8 ballot.

But staffing the city’s police force remains a challenge. By the latest count, according to City Manager Norberto Dueñas, only 812 sworn officers are considered street ready.

Last week, CBS Channel 5 reported that at least a dozen officers have been camping out behind police headquarters because mandatory overtime forces them to work up to 17-hour days. Since many officers commute from the Central Valley and beyond, they’ve been opting to stay put during the week.

Still, city officials acknowledge that the department has been just about stretched to its limit. In a memo prepared for Tuesday’s council meeting, Dueñas predicts that extended shifts will jump by 20 percent in the coming half-year unless the city beefs up patrol.

If the council approves the emergency declaration, SJPD would enact the new staffing changes Sept. 11.

Councilman Johnny Khamis told the Mercury News that he believes the staffing shortfall stems from the union’s efforts to actively discourage new recruits.

His colleague, Councilman Pierluigi Oliverio, has repeatedly suggested hiring outside help from the Santa Clara County Sheriff’s Office or the California Highway Patrol, which he says would curb or eliminate overtime.

In an email to constituents, Mayor Sam Liccardo acknowledged that the emergency declaration is a temporary stopgap, not a solution.

“Isn’t this simply a Band-Aid? Yes, it is,” he wrote. “Until the police department can aggressively hire and rebuild again, we will continue to implement whatever short-term fixes will improve the safety of the community and of our officers.”