Voters overwhelmingly passed Measure T in November, allocating $650 million for emergency preparedness and public infrastructure. That price tag—by far the largest voter-approved bond in the city’s history—also included up to $50 million for land conservation largely in the Coyote Valley.

On Tuesday, the San Jose City Council will discuss Measure T-related conservation plans for Coyote Valley, which is one of the largest remaining expanses of wild land in the Bay Area and the only connection between the Santa Cruz Mountains and the Diablo range. The 7,400-acre valley floor is home to endangered wildlife as well as more than 200 species of birds and safe drinking water.

The discussion is part of a multi-week process to determine whether Coyote Valley will remain untouched, or if commercial development should be allowed on the site.

Several projects over the past four decades have come close to encroaching on Coyote Valley, but—aside from a research facility and a golf course—nothing particularly substantial has been built over the wildlife habitat. Apple founder Steve Jobs considered Coyote Valley as a potential site for his company’s HQ, but ultimately decided against it. Hundreds more firms followed his lead when the Dot Com bubble burst, leaving many companies in the area to consolidate.

Council members this week will consider 60 pages worth of public input concerning development in Coyote Valley, including a memo from the California Legislature, a 25-page environmental study by the Santa Clara Valley Open Space Authority, a letter from former President Obama Interior Secretary Sally Jewell and scores of residents who oppose business development in the valley.

“The investment of Measure T money will help protest what natural infrastructure we still have remaining,”reads the letter signed by five state lawmakers, including Assembly members Ash Kalra (D-San Jose) and Kansen Chu (D-San Jose) and state Sen. Jim Beall (D-San Jose). “We applaud the city of San Jose for making a bold decision to help expand the preservation of Coyote Valley, protect it from further development and use opportunities like those offered through Measure T to permanently preserve this remarkable place for people, wildlife and our environment.”

Hopkins & Carley, one of Silicon Valley’s most prominent law firms, wrote in support of development, contending that building in the area would create something on the order of 35,000 jobs. “Environmental advocates do not have to provide services to the residents and taxpayers of San Jose” read the letter by Hopkins & Carley lawyer and former San Jose Mayor Chuck Reed. “Nor do they have to balance their interests with the interests of the entire City. We can protect Coyote Valley without destroying its jobs capacity.” 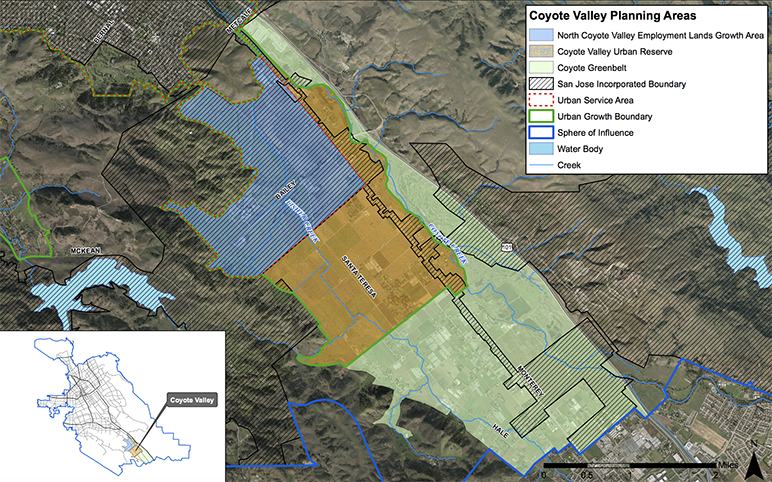