According to the Los Gatos-Monte Sereno Police Department, Jenny Higgins Bradanini—who’s running against Matt Mahan and Helen Wang for Councilman Johnny Khamis’ District 10 seat—was headed to a doctor’s appointment at around 11:40am that day when she rammed her SUV into Timothy Starkey, a 66-year-old Santa Cruz man. 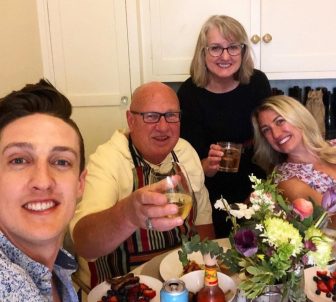 Tim Starkey (second from left) pictured with friends and family.

Los Gatos-Monte Sereno police spokeswoman Sgt. Jamie Fields said on Monday that the incident is still under review, that no arrest has been made and that a cause has yet to be determined.

Field declined to disclose whether distracted driving played a role.

Higgins Bradanini, who expressed condolences to Starkey’s family last week, has been taking time off from her campaign to deal with the fallout of the tragedy.

Her campaign manager Eric Stroker said he has no updates to offer at this time.

Meanwhile, Starkey’s friends have started a fundraiser for his widow, Kathleen Starkey. As of early Monday afternoon, a GoFundMe for the Starkeys garnered $7,500 from 48 donors out of its $10,000 goal.

“Tim Starkey brought so much joy to the lives around him and had a heart of gold,” the GoFundMe campaign creator named Carrie Coffee Ziemer wrote on the site. “Tim shared his sense of humor with everyone he encountered and was happiest cooking a meal during the holidays or a Sunday night dinner with a curated soundtrack.”

Ziemer invited people to share “fond memories” of Starkey on the page, in addition to financial help for his surviving loved ones.

“The Starkey family is grieving with family and friends while also working through the repercussions of the accident and loss of Tim,” Ziemer wrote. “The family has had a tremendous amount of love and support offered to them and has a long and difficult journey ahead. In order to help ease the stress of the financial burden that lies ahead, we have created this fund for Kathleen, Bridget and Joe. They are so grateful for the love, support and contributions from their village.”