With a growing number of people living out of RVs on San Jose streets, the city has seen an uptick in calls to tow them. But companies licensed to take care of city-generated tows are claiming financial hardship, citing the unsanitary condition of the RVs and an inability to recoup costs.

One contractor, City Towing, stopped paying the city almost exactly a year ago, racking up about $256,000 in delinquent fees and interest while asking for a rate reduction to make up for lost profits. The remaining five city-hired tow operators supported City Towing’s plea, which prompted the city to propose fee cuts that could reduce city revenue by as much as $744,000 a year.

The City Council on Tuesday will vote on whether to approve the deal, which would still require City Towing to gradually pay back the amount it has withheld since last year.

That a company could renege on its contract and get a de facto raise came as a shock to Art Amirkhas, owner of Morris & Sons Towing, a company that is not part of the city’s tow rotation. Amirkhas said that City Towing should have anticipated higher RV disposal costs and labor rates along with declines in scrap metal prices and lien sales. 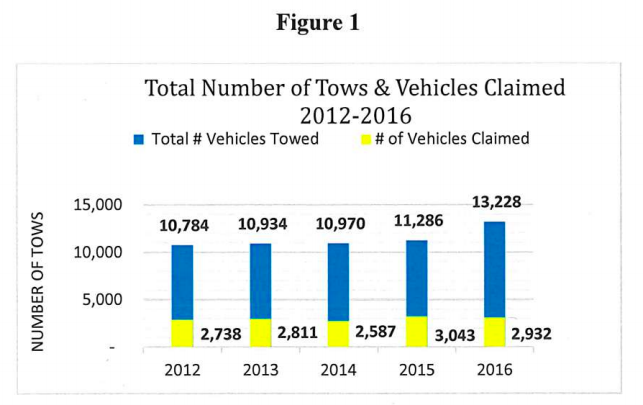 “They are costs Morris certainly accounts for, and I am confident that if Morris were serving on the city rotation, we would be able to do so efficiently and maintain a profitable business model under the city’s set terms without declaring any hardship or committing similar breach,” he wrote in a letter to the council. “Perhaps the problem isn’t the increased costs cited by City Towing, but the management of the businesses with whom the city is contracted.”

Amirkhas said he’s troubled that the city is poised to take a huge loss to its general fund instead of looking for contractors who can meet the existing terms of the agreement.

The city’s finance and code enforcement divisions recommend reducing the fee from $80 to $59 per tow and knocking the cost to contractors down by another $464,000 for credits to make up for lost profits. Staff also proposes reducing the contractually required security deposit from $25,000 to $5,000 per operator.

According to the city, about 76 percent of towed vehicles go unclaimed and must be sold off or scrapped by tow companies. Unclaimed vehicles are usually lien sold at auction or junked at the tow company’s expense.

“Staff concurs that current market conditions affecting operations are impacting profitability for the operators,” according to a memo from city Finance Director Julia Cooper and Interim Planning, Building and Code Enforcement Director Rosalynn Hughey. “As a result, staff proposes an alternate compensation model using data and information provided by the operators that evaluates revenues, labor costs, reimbursed costs for cleaning and disposing of ‘junk’ tows, and other lost revenues.”

Cooper and Hughey also suggest having an auditor evaluate the program next year.

More from the San Jose City Council agenda for October 31, 2017: