San Jose renters ended a five-day hunger strike Tuesday with a landmark political victory and the biggest expansion of tenant rights in decades.

Under one of the new rules approved by the city’s elected leaders, landlords can no longer oust tenants without citing a “just cause.” A second ordinance tentatively approved will require property owners who want to raze rent-controlled buildings to foot the bill for relocating displaced tenants.

Until this week, San Jose was the last major Bay Area city to allow landlords to kick out tenants without having to explain why. Activists lauded the reforms, citing them as proof that the South Bay’s renter rights movement has become a force to be reckoned with.

The policy changes followed hours of impassioned testimony from tenants pleading for stronger protections in one of the nation’s most competitive housing markets. Property owners, on the other hand, defended the status quo, arguing that stricter rent controls could have a chilling effect and drive mom-and-pop landlords out of business.

The debate split the council along ideological lines, with the same majority behind two 6-5 votes and Mayor Sam Liccardo and his centrist-to-conservative colleagues opposed. Supporters of stronger tenant protections called housing a human right, one that preserves the city’s diversity and keeps families together. They described how less restriction on landlords effectively puts more restriction on tenants.

“I think it’s clear as day, what we need to do,” said Councilman Sergio Jimenez, who introduced the prevailing motion for just-cause protections. He added: “We heard about the plight of the landlords, and, to be frank, cry me a river.”

“I feel a moral obligation to represent my residents, not just those who live outside San Jose,” she said, referencing a Working Partnerships study showing that the vast majority of landlords are based outside the city.

Rocha said the packed council chambers prove that housing issues have reached a boiling point in San Jose that he could no longer ignore.

“This does not happen every gosh darn Tuesday,” he told the freshmen council cohorts before casting his two “yes” votes in favor of tenants. Responding to concerns that the new rules would undermine landlord rights, Rocha said: “This is more than just a contract for services, this is somebody’s home.”

Conservatives on the council saw the issue in terms of economics, public safety and property rights. Councilman Johnny Khamis, who owns rental property in San Jose, said the city already over-regulates landlords—or as he euphemistically calls them, “housing providers.” Instead of creating new laws, he said, the city should enact existing ones. He also warned that taking power away from landlords could trigger dire consequences.

“For every reaction there’s an equal and opposite reaction,” Khamis said, rattling off housing new regulations the city imposed in the past year. Hisses and jeers from the audience forced him to pause a beat before continuing. “What’s really clear to me is that there’s going to be reactions to what we’re going to get done tonight. Are we willing to live with those reactions?”

The city’s housing staff said San Jose has seen more than 2,400 evictions without cause since 2010—a 270 percent increase. That only accounts for apartments covered by the city’s rent control laws, which are limited to a small fraction of the overall housing supply. Tenant advocates say the actual number is far higher.

“I have seen these unfair evictions result in homelessness, anguish and disruption in people’s lives,” said Kenia Vega, a renter who said she received an eviction notice in February after reporting mold and termites.

Ruby Dominguez tearfully told the council about the 30-day eviction notice she got from her landlord, who cited no cause for ending the lease. The most affordable place she found that was close enough to her children’s school was a rundown motel, where she stays with her son while her daughter lives with a relative.

“I didn’t want to uproot my kids when I had already uprooted them from their home,” she said, her voice choked with emotion.

Landlords argued that the new regulations will leave them stuck with bad tenants. Carlos Padilla, a property owner who lives in San Jose, said he has had to deal with gang problems, prostitution and drug dealing at his apartment.

“Boom!” he said. “A few years ago, a gun went off in my apartments. The bullet went through the floor and into one of my other apartments.”

Padilla said he worries about being unable to do anything about a bad tenant if one of the good ones calls for help.

“Some of these examples are easy to prove,” he said, “but some are not.”

Several landlords expressed that same fear despite assurances from Jacky Morales-Ferrand, who leads the city’s housing division. She explained at the outset of the meeting that the new policy enumerates a dozen “just causes” to evict a tenant. 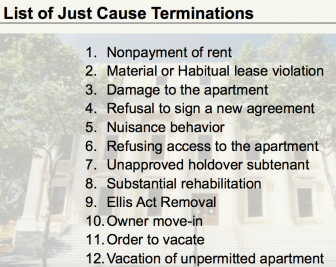 Instead of imposing more regulations on existing affordable housing, he said, the city should promote policies that stimulate new development.

Wu also had concerns that the policy requiring tenants to report safety and habitability violations to qualify for just-cause protections would sour relationships between landlords and their lessees.

“This policy divides people,” he said. “It turns people against each other.”

The city’s housing officials proposed a policy to protect renters from eviction if they report needed repairs or substandard building conditions. But council members Rocha and Peralez wanted to make that protection automatic for all tenants, not just the ones who make noise.

Arenas and Jimenez took it a step further, insisting that protections should kick in right away instead of after 12 months, as suggested in a compromise measure by Councilman Chappie Jones. With those changes adopted, the new policy extends to all of the city’s renters, an estimated 450,000 people, from the first day they move in.

“Landlords have all the power and tenants have none,” said Jimenez, who stressed the importance of stability for low-income families, having been raised by a single mom in a rent-restricted apartment in San Jose’s East Side.

Arenas agreed that stable housing can alter the course of a person’s life. Children who grow up in cramped quarters, where many families find themselves after being forced out of their homes, can cause developmental delays in young children, she said.

Council members Lan Diep and Dev Davis wanted the protections to apply only to tenants who reported problems at their unit. They also wanted to nix the requirement for landlords of rent-stabilized buildings to offer tenants a year lease.

“The bad news is that housing is not a right,” said Diep, who noted that he spends 40 percent of his $92,000 annual salary on a one-bedroom apartment. “The good news is that it can be in San Jose if we decide.”

Requiring landlords to offer renewed leases against their will borders on government overreach, he suggested.

“Mainly what I’ve been hearing tonight is the advocacy rights for tenants, while not hearing the contract rights or the property rights of the landlords,” he said.

Davis echoed concerns raised by landlords that giving tenants recourse through the city could sow distrust and incentivize litigation.

“We’re giving a tool that could be used as a bludgeon, as a weapon,” she said, “so I am concerned about that.”

One of the ordinances approved Tuesday bolsters protections under the Ellis Act, a state law that lets landlords “quit” the rental business if they demolish rent-controlled housing. Under the fortified local policy, landlords will have to give tenants four months to a year’s notice about their intent to remodel a building. Landlords will also have to chip in for moving costs, and if they put units back on the market within five years, they have to place them all under rent control.

The Ellis Act proposal stemmed from a mass eviction last year of 672 residents at The Reserve, a 216-unit rent-controlled apartment in West Valley. With no requirement to compensate displaced tenants, the landlords negotiated a settlement with only a fraction of tenants for only a fraction of the cost of finding a new place to live.

At the behest of Rocha and Peralez, the city will also study the option of linking annual rent control to inflation instead of the fixed 5-percent cap. The city will also revisit the idea of placing 11,000 duplexes under rent control, which is limited now to 43,000 apartment units built before 1979.

Robert Aguirre, who found an apartment in 2014 after living for years in a homeless encampment, was served a no-cause eviction notice last month.

“There was no cause, but I understand why,” he said. “My landlord has been asking for more money, but because I’m in a subsidized program, she cannot raise [the rent] any more than 5 percent.”

With a little more than 50 days to find a new place, Aguirre said, tensions are mounting.

“The next time I come before you, I hopefully won’t be saying … I am homeless.”

Anil Babbar, a landlord lobbyist for the California Apartment Association, said legislation should not be base anecdotes, however heartfelt.

“Good public policy isn’t based on stories, but on good data,” he said.

Before casting her swing vote, Carrasco referenced that point to counter it.