The SCU Lightning Complex Fire burned about 56,000 acres of Henry W. Coe State Park—about two-thirds of the park’s territory—but authorities say the blaze was good for the long-term health of the vast wilderness ecosystem.

According to a Coe Park damage assessment published Sept. 11 in the Pine Ridge Association newsletter, the fire that was sparked by an Aug. 16 lightning storm consumed the entirety of the Orestimba Wilderness backcountry within the park.

The assessment was written by Wes Gray, Natural Resource Manager of the Diablo Range District of California State Parks.

“While the loss of structures and the human cost of fires is unfortunate, the landscape at Coe is built to burn,” Gray wrote in the newsletter, known as The Ponderosa. “The more often it happens, the less likely a catastrophic fire will occur. The majority of this fire at Henry Coe burned at a low intensity, primarily consuming grass and brush, while not torching the canopies of trees.”

In some areas of Coe Park, the topography contributed to more destructive fire conditions, burning more vegetation like oak and pine trees.

For the most part, however, the wildfire consumed the vegetation understory of the park, including downed trees that serve as fuel to any wildfire.

“Overall this burn was good for the ecology of Coe … it burned very similar to how a planned prescribed burn would,” Gray wrote. “There was a lot of consumption of downed trees and other fuel loads while not burning so hot as to damage seed banks or consume old heritage trees. Many of the hillsides burned in a perfect mosaic pattern leaving green unburnt vegetation. This will provide refuge for wildlife and lead to an increased diversity in plant age class over time.”

Gray predicts that next spring will be a “banner year for wildflowers” in Coe Park.

According to Cal Fire’s final incident report of the SCU Lightning Complex, the wildfire burned 396,624 acres of vegetation in seven counties. At one point during its growth, the SCU Fire was ranked the largest wildfire in the state’s history; but other fires that continue to burn in northern California have since eclipsed the SCU Fire in size.

The SCU Fire, in fact, started as several separate fires ignited by lightning strikes during a series of storms last month.

“Within the Diablo Range, the Marsh Fire near Milpitas quickly spread southeast,” The Ponderosa Co-editor Patrick Goodrich wrote in the newsletter. “With 100-degree temperatures, single-digit humidity, and fanned by strong winds, it did not take long for the fire to reach the northwest slopes of Mt. Hamilton. Meanwhile, fires in Del Puerto Canyon northeast of the park expanded out of control and encroached upon the Orestimba Wilderness. By the afternoon of August 17, the park was closed to the public.”

In the weeks that followed, the two main fires grew into the massive SCU Complex. Residents of eastern Santa Clara County faced evacuation warnings and—in the case of the Jackson Oaks and Holiday Lake neighborhoods of Morgan Hill—brief orders to leave their homes as the fire continued to grow.

By Aug. 26, the threat to populated areas had diminished as Cal Fire set fuel breaks on the western edge of the SCU Lightning Complex and implemented back burning operations to starve the blaze of fuel.

According to Cal Fire, the SCU Complex destroyed 136 structures and resulted in injuries to six people, including four firefighters.

Coe State Park is the largest state park in northern California. It stretches south and east from Morgan Hill, with entrances off East Dunne Avenue and Gilroy Hot Springs Road.

As of Sept. 22, Coe Park remains closed due to the SCU Fire.

Within the park, the SCU Fire burned roughly the same area as the 47,000-acre Lick Fire of 2007, Goodrich wrote in The Ponderosa. The SCU Complex, however, burned more of the park than any previous blaze since Coe Park was created.

Structure and facilities damage from the SCU Complex inside Coe Park was minimal, according to The Ponderosa. Two backcountry restrooms suffered light smoke damage. Trail markers and road signage were damaged by the fire and crews, but the assessment is ongoing. Minor damage and downed trees on some dirt roads will need to be cleared. The Texas Cabin at Gilroy Hot Springs—located in the southwest portion of Coe Park—was damaged from fire retardant applied to the structure to prevent its incineration.

Gray estimates that more than 50 spring boxes—built by park staff and volunteers over the years—were damaged in the SCU Fire area. These boxes were built to provide access to natural springs for wildlife and horseback riders. Some springs have been developed with troughs and tanks, and these “fared a bit better than the spring boxes,” Gray wrote.

The SCU Fire spread as far south as Coe Park’s Dowdy Ranch Visitor Center in Merced County, but fire crews were able to protect the structure from significant damage.

Gray’s assessment adds that when it comes to natural resources, the SCU Fire damage will likely benefit the park’s Ponderosa Pine population. “No mature Ponderosa appeared to have burned. The reduced competition from clearing the understory is part of the long term strategy to protect this species and promote their regeneration,” Gray wrote.

Some of Coe Park’s lakes and dams were in the SCU Complex footprint, but no significant damage occurred to these facilities, according to Gray.

The Ponderosa is a quarterly newsletter published by the Pine Ridge Association (PRA), a volunteer organization that helps maintain and preserve Coe Park.

“The PRA’s mission is to enhance and enrich the public’s experience at Henry W. Coe State Park through education and interpretation,” says a note at the end of the latest version of The Ponderosa.

The Ponderosa published the photos below depicting damage from the SCU Complex in the latest edition of the newsletter: 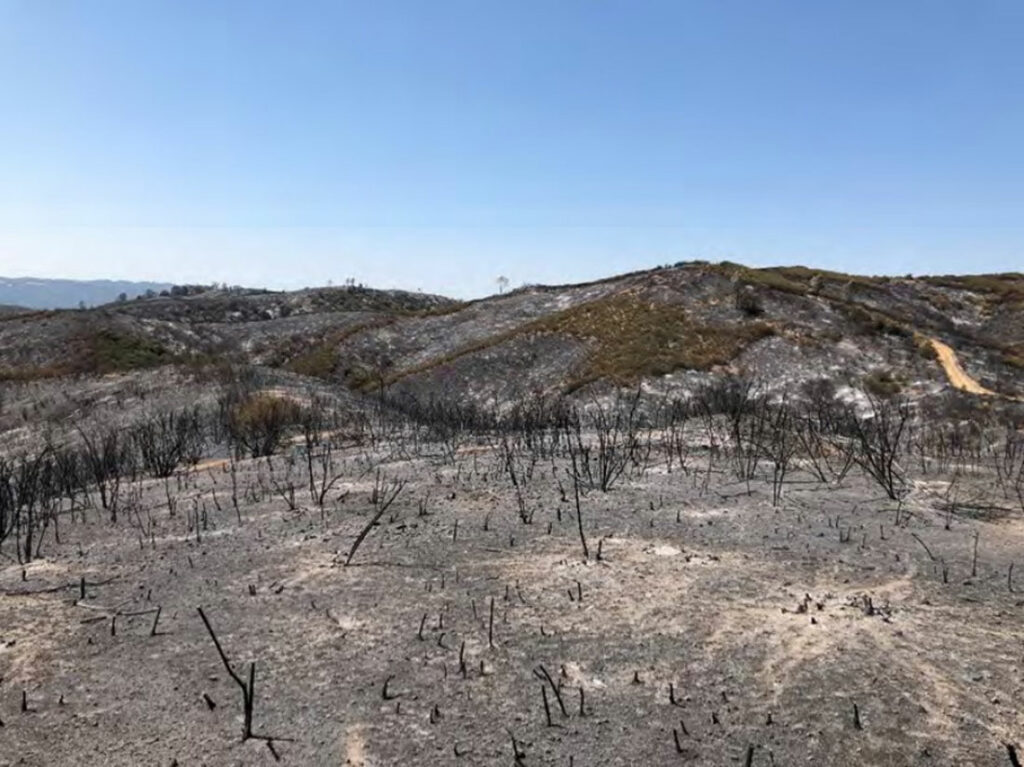 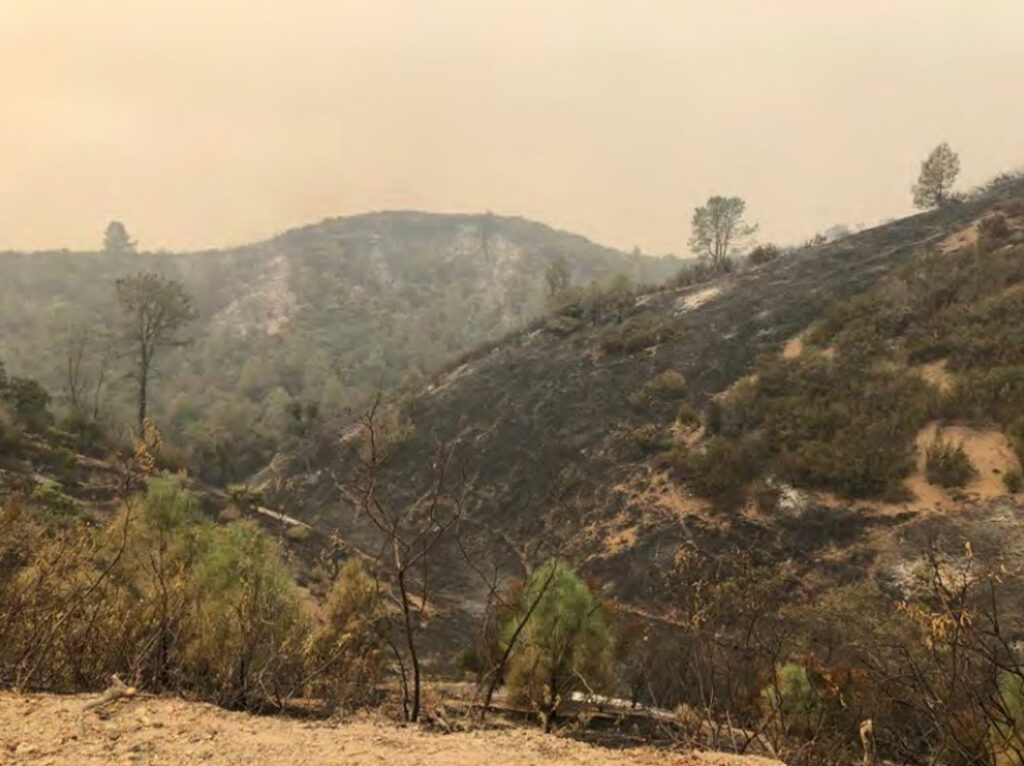 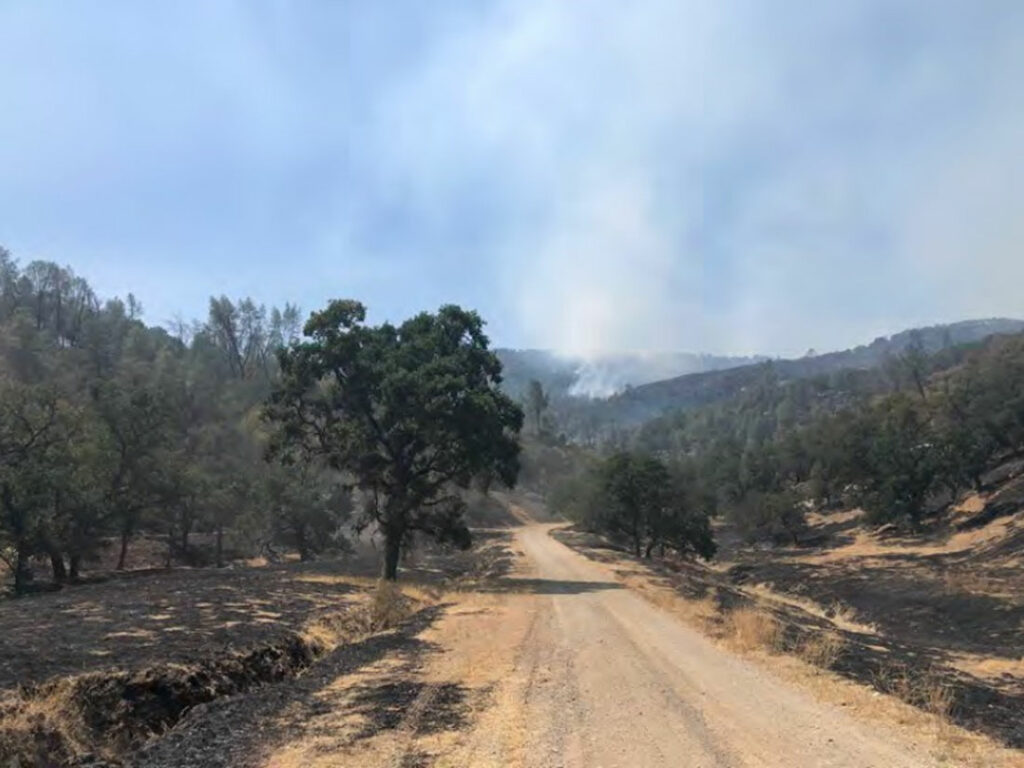