San Jose Officer Jared Yuen may have gone viral for taunting protesters, but his behavior—memorialized on camera for millions to see—was tame compared to his colleagues.

Since protests erupted Friday in San Jose as part of a national uprising against police brutality ignited by the public killing of George Floyd by Minneapolis Officer Derek Chauvin, the Capital of Silicon Valley has responded with sometimes brutal force. 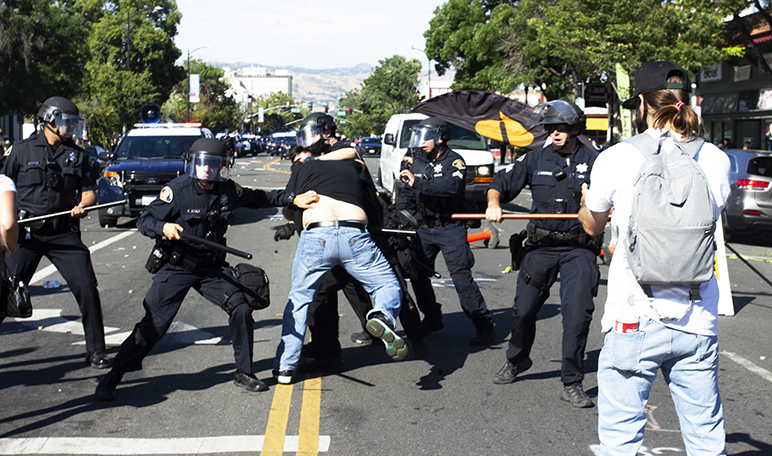 Well over 100 people were arrested at the protests. (Photo by Kyle Martin)

Tear gas choked out crowds of masked protesters of all ages. Cops shoved people to the ground with batons. They pummeled observers with rubber bullets, which left massive purple bruises on people of all ages. Reporters who were just trying to do their jobs, were detained even after they clearly identified their credentials.

“The kids protested and marched down the street, disrupting the system, peacefully,”  he said after the first demonstration. “Then the police channeled them all the way back down and headed back down Santa Clara Street, for whatever reason.” 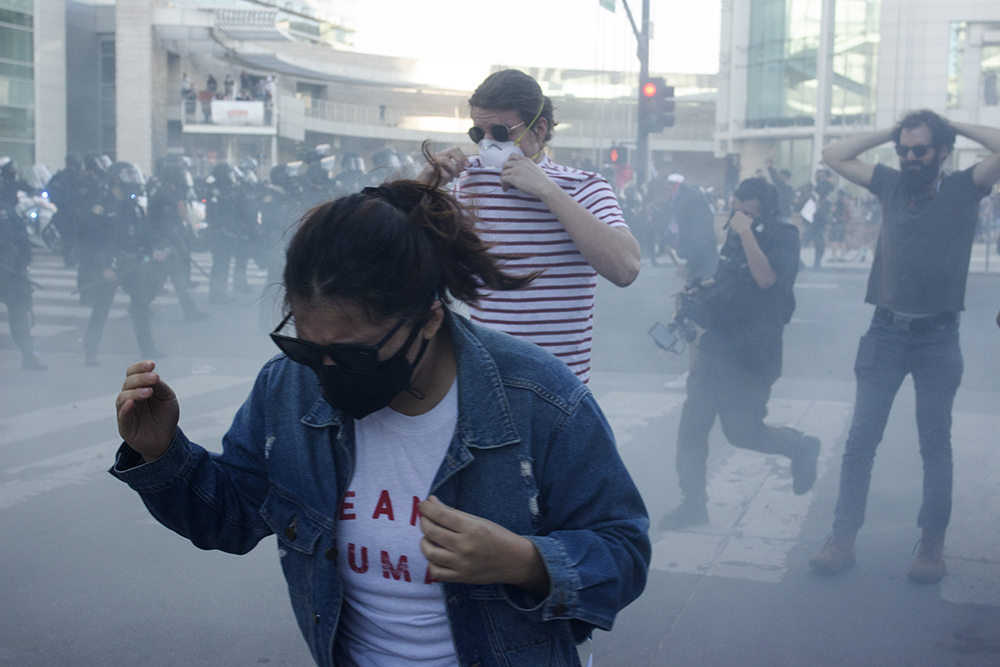 That we’re in the middle of a deadly pandemic caused by a lung-choking disease didn’t stop San Jose police officers from using tear gas. (Photo by Kyle Martin)

How the protests devolved into skirmishes and scores of arrests reflects the broader problem of failed oversight, Rev. Moore said. San Jose Independent Police Auditor Shivaun Nurre runs an office with extremely limited powers. And every effort to expand them has been met with vociferous resistance by police unions.

The Santa Clara County Sheriff’s Office is no better, if not worse. Though the Board of Supervisors created an independent monitor’s office to regulate the agency, the effort has been beset by years of delays and resistance. 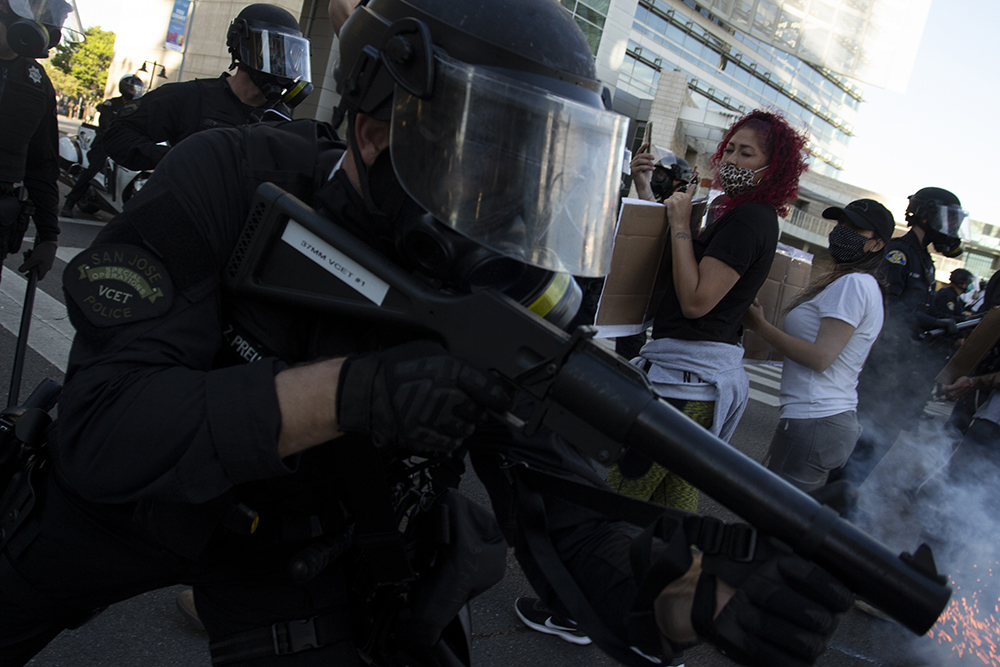 Police responded with a heavy militarized presence to every demonstration. (Photo by Kyle Martin)

Moore, and many other community civil rights leaders, tried facilitating peace between protesters and advancing law enforcement. But on Friday, he found himself thrown into the skirmish as officers with batons and gas masks cornered protesters from East Santa Clara and Fifth streets, around City Hall and then out of the area.

After the city’s own residents were shot and battered by cops during the initial protest against their profession’s brutality, the bruises and scrapes were still not enough for city leaders to quell the militarized police presence. Saturday brought more of the same, with SJPD clashing with people demonstrating against the police violence that killed George Floyd, Breonna Taylor and countless others black and brown people.

“I saw a community particularly led by young people that were taking a courageous and righteous stance for the memory of George Floyd, for the memory of people killed locally by police violence, and a call for Black Lives Matter, a call for racial justice and honestly a call for their survival,” Raj Jayadevof Silicon Valley De-Bug said in an interview Sunday. 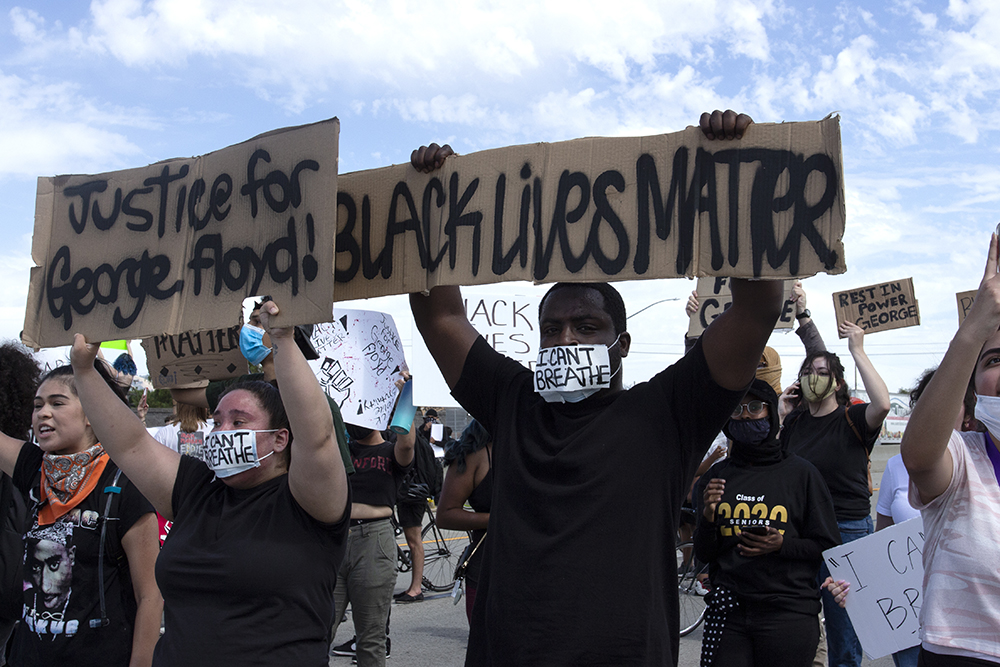 The protests were largely let by young people. (Photo by Kyle Martin)

Noting that there was a large representation youthful protesters in the crowds throughout the weekend, Jayadev said it’s young people leading the uprisings around the country because of how deeply they’re impacted by police killings.

“Who I saw out there were young people who had had enough and were not going to sit idly by and keep watching these videos of lynchings,” Jayadev said. “I would say, too, that I also saw police officers just indiscriminately using weapons of force—firing rubber bullets, firing tear gas canisters and putting a lot of people who are there to peacefully protest in the line of fire and in danger. And at the risk of pretty severe injury.”

Videos throughout the country have surfaced of bloody protesters bludgeoned by rubber bullets and tear gas canisters and police batons.

“They’re either aiming to hurt somebody or they’re shooting into a crowd, which means they have no idea who they’re hurting and either way, it’s a lose-lose,” Jayadev said. “I thought the police were antagonizing the community. I thought they were instigating at times. I certainly saw it first hand. People would be jabbed with those baton things out of nowhere. And also verbally.” 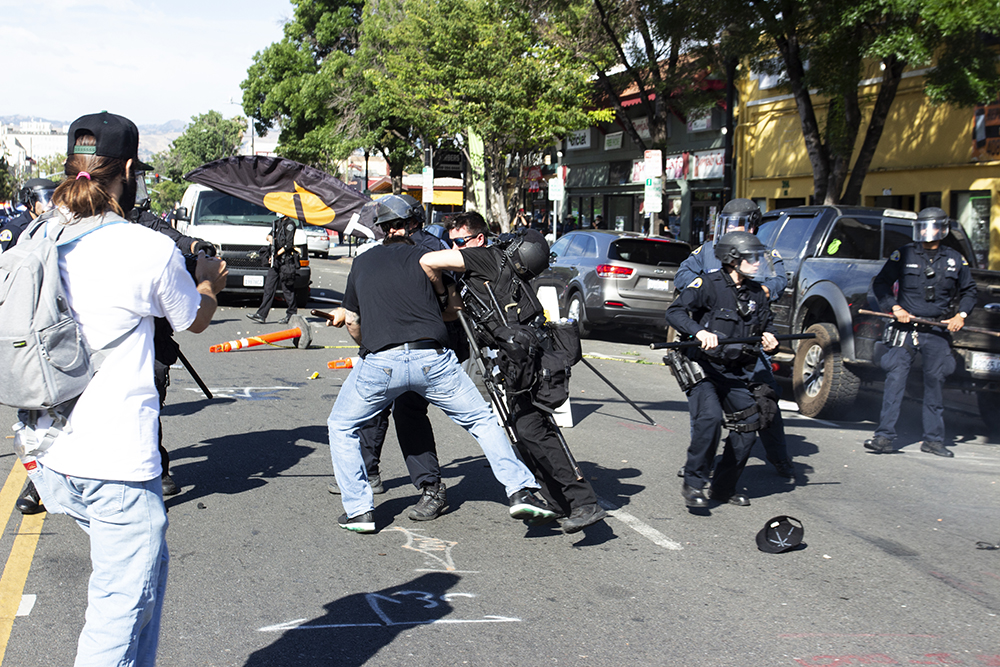 SJPD has yet to release a list of names of all the protesters who were arrested. (Photo by Kyle Martin)

According to the San Jose Police Department, officers made 38 arrests on Friday and 50 arrests on Saturday. On Friday the city assigned to the protest 327 SJPD officers, who teamed up with another 91 personnel from 13 outside agencies. On Saturday, there were 195 San Jose cops and 39 deputies from the Santa Clara County Sheriff’s Office.

On each day of the protests, an untold number of civilians were injured from rubber bullets, choked by tear gas and dispersed by flash bangs deployed to disperse what were meant to be peaceful gatherings. Jayadev himself got hit in the hand, and he knows several others who were hit too. People all over the country were targeted and brutalized by police for protesting police violence against community members.

While SJPD Chief Eddie Garcia condemned the behavior of one officer so far, Jayadev said the problem extends far beyond a few “bad apples.”

“The violence is endemic to that system,” he said, “and that’s what has become apparent when you look at the experiment of peaceful protest in different cities. Why is it that we’re seeing a recurring theme? It’s not like there’s something in the groundwater that’s different in New York from San Jose. … There’s absolutely a causal link from what you and I saw downtown, what we saw Officer [Jared] Yuen do, and what we saw officers in other cities do. It is the nature of police and policing.” 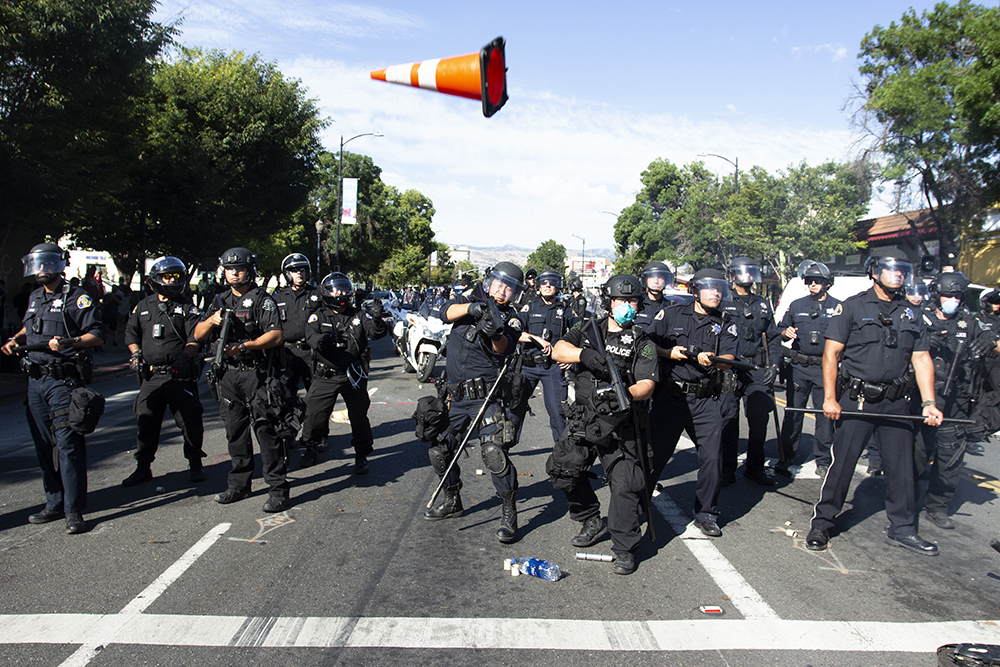 Some protesters lobbed water bottles and traffic cones at the cops, who responded with disproportionate force that left people bloodied and bruised. (Photo by Kyle Martin)