Pressuring women to watch him fap apparently didn’t do enough to sabotage his career. So Louis C.K., by several accounts, rebranded himself as a reactionary old geezer.

In pirated audio of a New York standup set widely flayed as mediocre and unfunny, C.K. punched down with japes against non-binary folks and Parkland massacre survivors and how he lost $35 million in a day because word got out about him being a predatory lech.

The 51-year-old comedy legend still sells out shows, albeit at smaller venues than in his heyday, and has plenty of defenders. Many bookers throughout the U.S. support his continued work in the industry on principle, saying comedy clubs are bastions of unfettered expression and that they feel obligated to protect them as such. (That’s arguably beside the point, considering how the misconduct in question occurred entirely offstage, and how detractors generally seem less offended by the subjects of his leaked jokes than by their lack of redeeming punchlines.)

Regardless, C.K.’s appearances of late are more likely to prompt outrage and protests, including his most recent stop in Silicon Valley.

I knew San Jose Improv DGAF about women because of who they book, but bringing in Louis CK was an immediate mailing list unsubscribe/do not attend/tell my friends.

Moments after the San Jose Improv announced Monday that C.K. was set to perform on two nights this week—days before the third annual Women’s March—activists opted to fight free speech with free speech, launching online petitions and planning demonstrations to denounce the club’s booking.

Wonder if any hecklers will buy tix just to boo him,

He was the funniest comic i ever saw in person. But that was then...

The Enough is Enough Voter Project, a political action committee that aims to hold leaders accountable for sexual misconduct, teamed up with organizers of the Bay Area Women’s March in calling for a boycott of the show. They will also convene a protest outside the downtown theater for booking C.K. and for ticket-holders validating the venue’s decision to do so.

“The Improv should not give a serial sexual harasser a platform in our community to make light of the harm he caused to his victims,” says Michele Dauber, the Stanford law professor who founded Enough is Enough last year after leading the successful recall of Judge Aaron Persky for his light sentence in a high-profile rape case.

A Change.org petition launched by Nicole Coxe echoed that sentiment.

“As customers and/or residents of San Jose, we need to express to the owners that the decision to book Louis C.K. will lead to losing our support to attend future events at the venue,” Coxe wrote in the campaign, which garnered only a few-dozen signatures by this morning. “The decision seems especially tone-deaf in light of his recent performance in NYC … He is not the victim in this, and he does not need our help to launch a comeback.” 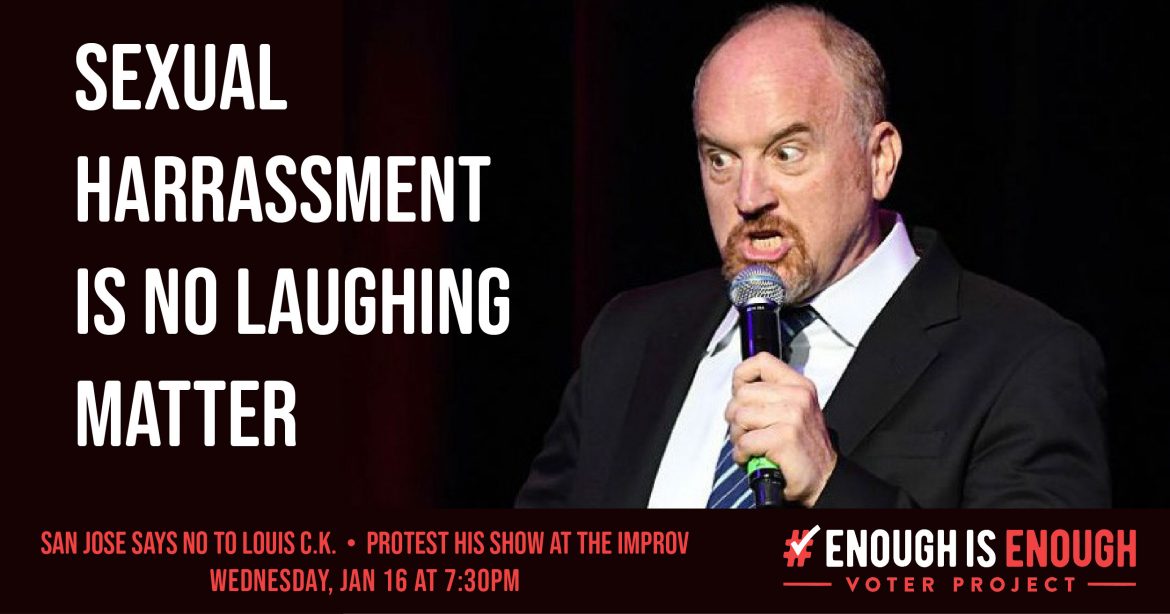 Jennifer Higgins Bradanini, president of the San Jose Women’s March, says situations like this underscore why the global movement of  pro-equality rallies is so important. “Powerful, rich and famous men like Louis C.K. and R. Kelly are able to victimize women with impunity, especially women of color,” she states in a news release Tuesday. “Obviously, there is still a lot of work to do.”

Huh, Louis CK playing the Improv in San Jose. That's, uh, quite a bit different than his normal old venues.

Also, I wonder what kind of reception he'll get here.

Local comedians and impresarios have hesitated to comment publicly about the Improv’s decision to book C.K. Santa Cruz-based standup DNA, who has organized comedy shows and festivals throughout the state for the past decade, says he’s disheartened by the club giving C.K. a platform. From a business standpoint, he says it makes sense.

To him, though, even that wouldn’t make it worthwhile.

“I will never give somebody whose actions have hurt other comics’ careers a space on my stage at the Comedy Lab,” he says.

DNA recalls several times over the years where he’s had to decide whether a comic’s “creep factor” outweighs their other qualifications. If a performer becomes a threat to people around them, he explains, then it’s up to the comedy community to take a stand.

“Unlike the Improv, I’m not a soulless corporation. I believe in comedy community. I want to unify comedians to be stronger, and that sometimes means cutting loose dead weight. Popularity shouldn’t be the barometer on which decisions are made.”

Should C.K. be banished from the scene? If so, for how long?

T.J. Miller, who’s due to perform Feb. 22 to 24, is accused of, among other things, raping and punching a woman in college.

Donnell Rawlings, who’s slated for the weekend of Jan. 25 to 27, told a TMZ interviewer that most of the women raped and assaulted by Hollywood mogul Harvey Weinstein should have known that sexual violation was the price to pay for the chocolates, the champagne, the hotel suites and the work.

The ex-bodybuilding HodgeTwins, booked for March 10, lost gigs after making a name for themselves as transphobes and being a male version of the Diamond and Silk duo, ultra-conservative African-American #MAGA boosters with a social media following.

Hopefully that doesn’t mean he’s taking his pants off.